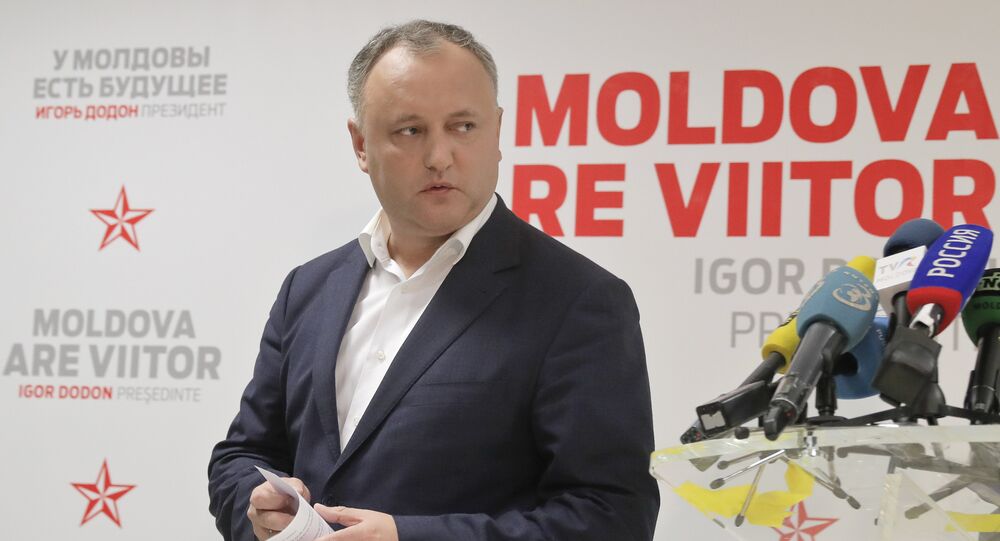 Speaking about the significance of his recent electoral victory, Moldovan President-elect Igor Dodon revealed to Russian media that if his opponent Maia Sandu had won the election, the Moldovan state would have disappeared from the map of Europe and been absorbed by Romania.

Speaking to Russian news website Lenta.ru on Thursday about the significance of his victory, Dodon revealed that his win may have saved Moldova's statehood, because his opponent openly talked about incorporating the southeastern-European country into Romania.

"My political opponent Maia Sandu has acknowledged that she has Romanian citizenship. One of the points [of her program] was to unify the country with Romania," the President-elect explained.

"How can one vote for a person who openly runs for the presidency of a country in order to destroy it, to eliminate it?" he added.

During the election campaign, Dodon and the Socialist Party repeatedly warned against 'playing with the fire of national sentiment', stressing that Moldova is an independent nation, and has its own language, history and culture, and that any attempt by Romania to annex the country would lead to civil war.

© AFP 2021 / GEORGES GOBET
Discontent Over EU Association Deal Major Factor in Russia-Friendly Candidate's Victory in Moldova
Also during the campaign, Dodon vowed that he would pursue a policy of rapprochement with Russia, including restoring tattered political and economic ties. In recent years, the country has been drifting toward the EU, Romania and NATO, and has actively sought to squeeze Russian peacekeepers out of its breakaway region of Transnistria, with assistance from Ukraine.

© AP Photo / Roveliu Buga
Riot police officers stand in line in front of protesters, some wanting closer links to Russia, others demanding a crackdown on corruption, outside the parliament in Chisinau, Moldova, Thursday, Jan. 21, 2016. The country has faced regular protests since early 2015.

Moldova's economic dependence on Russia remains significant, with up to a quarter of its GDP coming from remittances of Moldovans living and working in Russia.

© Sputnik / Sergei Guneev
Putin Congratulates Moldovan President-elect Dodon, Invites Him to Russia
Russia welcomed Dodon's victory. Earlier this week, the Foreign Ministry said that it hoped that the President-elect would fulfill his campaign pledge to retain the country's nonaligned status. President Vladimir Putin, meanwhile, congratulated Dodon and said that he hoped for constructive dialogue and cooperation, in line with the provisions of the Russian-Moldovan Treaty on Friendship and Cooperation.

The Russian head of state also invited Dodon to visit Russia. Earlier, Dodon's campaign chair promised that the President-elect would be making his first official foreign visit as President to Russia.

Moldova: Fate of Southeastern Europe Being Decided in Contentious Elections