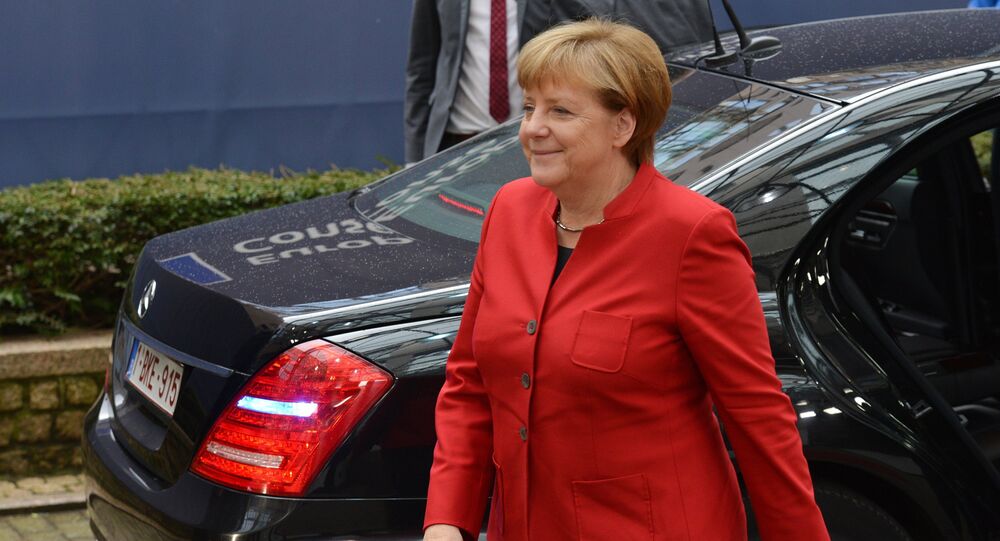 Preparing for a possible fourth term as German Chancellor, Angela Merkel continues to stick to the same old stance on pressing problems, such as the migration crisis, the deterioration of relations with Russia and the split in the EU, according to political analyst Vladimir Ardayev of the International Information Agency Rossiya Segodnya.

© AP Photo / Wolfgang Kumm/dpa via AP
Steinmeier's Nomination as Presidential Candidate Part of Merkel's Bigger Game to Prevent 'the Worst'
Political analyst Vladimir Ardayev of the International Information Agency Rossiya Segodnya, believes that Angela Merkel hasn't got any new solutions to the problems of the migration crisis, the deterioration of relations with Russia and the split in the EU, while getting ready for the possible fourth term as German Chancellor.

His article titled "The fourth term of Angela Merkel: when one does not want to sum up the results" came after a member of the Christian Democratic Union party, led by Merkel, said that she will be seeking a fourth term as  German Chancellor in the federal elections set to be held next year.

"She will run for chancellor … She is absolutely determined, willing, and ready to contribute to strengthen the international liberal order. But we can't see the chancellor or Germany as the last man standing," Norbert Roettgen told CNN in an interview.

© AP Photo / Jens Meyer
A protestor holds a poster with an image of German Chancellor Angela Merkel wearing a headscarf in front of the Reichstag building with a crescent on top during a rally of the group Patriotic Europeans against the Islamization of the West, or PEGIDA, in Dresden, Germany, Monday, Jan. 12, 2015

Ardayev recalled in this regard that so far, only Helmut Kohl has managed to serve four terms as head of the German Federal Government. He was in office between 1982 to 1998, adding significantly to the process of European unification and the end of the Cold War.

Konrad Adenauer served three and a half terms as German Chancellor, and in 1963 he voluntarily resigned due the fact that he was 87 at the time.  He stepped down at the height of his fame, becoming the political and economic architect of his country.

"If Merkel's plans come true, she will manage to catch up with these politicians concerning the length of time in power. But it remains to be seen whether she will leave behind the same trail of glory and recognition," Ardayev said, referring to Kohl and Adenauer.

Ardayev quoted president of the Center for Strategic Communications Dmitry Abzalov as saying that Merkel's reelection is rather problematic.

© Photo : Pixabay
Et Tu, Brut? Merkel Fears Russian Hackers May Try to Meddle With 2017 Election
He recalled that Merkel will only remain in office if the CDU/ CSU/SPD coalition wins the elections and if the CDU/CSU alliance, not the SPD, preserves the overwhelming majority.

In this vein, he cited Abzalov as saying that Merkel's radical anti-Russian policy was not supported by the CDU/CSU coalition partners, and Foreign Minister Frank-Walter Steinmeier has repeatedly criticized his government's political line to further deteriorate relations with Moscow.

"The SPD's stance on the rapprochement with Russia enjoys in the growing electoral support in Germany, and the future parliamentary elections may see the situation when the CDU/CSU bloc rather than the SPD becomes a 'junior partner' in the coalition. It means it is the Social Democrats who will nominate Merkel's candidacy," Abzalov said.

Ardayev also quoted Alexander Orlov, head of the Institute of International Studies with the Russian Foreign Ministry, as saying that Merkel's intention to extend her tenure as Chancellor can be attributed to the fact that she is unwilling to recognize the results of her 12-year work in office.

These results do not look particularly impressive, something that is first of all concerned by Merkel's plummeting popularity ratings in Germany.

"Like many liberals, Angela Merkel does not want to admit her mistakes and defeat. Instead, she is looking to stay in the Chancellor's chair, hoping that she will manage to somehow improve her political image," says Alexander Orlov.

Abzalov, for his part, believes that the peculiarity of the current Western political landscape is that the future head of the German government may play the role of a full-fledged European leader without counting on Washington which used to call the shots.

"Merkel and Hollande, in fact, remain the only bulwark of the European Union, and the question is whether they will cope with such a burden," he said.
Ardayev, for his part, referred to the spate of political changes that are now under way both in in the United States and Europe.

"And Angela Merkel, preparing for the fourth time to be elected as Federal Chancellor, is carrying the baggage of old approaches to resolving the migration crisis, the deterioration of ties with  Moscow and the situation in Greece, which marked the beginning of the split in the EU," he pointed out.

© REUTERS / Sergei Karpukhin
Merkel's House of Cards Collapsing as Allies Fear Being Out-Trumped
He was echoed by Abzalov who did not rule out that during Merkel's possible fourth term in office, "she will have to confront   herself, namely, her previous position of uncompromising and hardline EU leader, which once allowed her to lead the German government during her second and third term."

The next German federal elections are set to be held between August 27 and October 22, 2017.

Merkel May Announce Candidacy for German Chancellor on Sunday