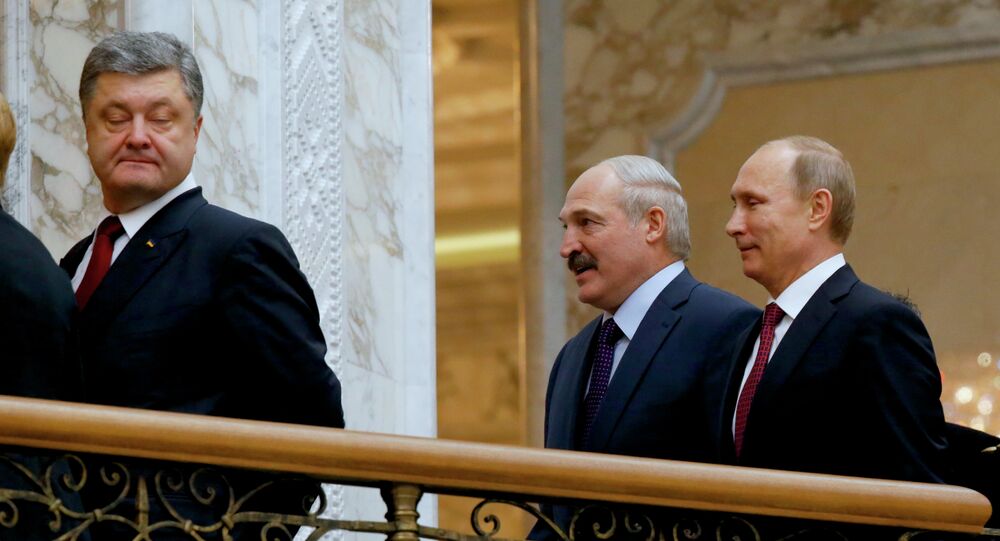 On Tuesday, the UN General Assembly committee responsible for social, humanitarian and cultural issues adopted a Ukraine-sponsored draft resolution on alleged human rights abuses in Crimea. The document calls the Russian peninsula, which voted in a referendum to rejoin Russia in 2014, as a 'temporarily occupied' territory, and calls on the General Assembly to condemn "reported serious violations and abuses committed against residents of Crimea."

Although the resolution was supported by Kiev's Western benefactors and several other countries, Kiev did not seem satisfied with the result of the vote. Only 73 countries voted in favor of the document, with 23, including China, India, and several other major powers opposing it, and a plurality of 76 countries abstaining. In a similar resolution issued in March 2014, Ukraine received the support of 100 governments, with 11 opposed and 58 abstaining.

Among the countries that rejected Ukraine's resolution was Belarus, Ukraine's northern neighbor, and a country which had previously sought to maintain a sense of neutrality in the course of the Ukrainian crisis. Belarus's formal neutrality played an instrumental role in its capital's choice as the negotiating platform for the Minsk agreements, dedicated to resolving the civil war in eastern Ukraine.

But following Tuesday's vote, Kiev seemed to have decided to remove the veneer of neutrality and partnership. Verkhovna Rada deputy chair Irina Gerashchenko called Belarus's vote a "knife in the back."

Speaking in the Rada (Ukraine's parliament) after learning the results of Tuesday's vote, Gerashchenko said that the decision of Armenia, Kazakhstan and Belarus to oppose the resolution was "particularly painful."

"As far as Belarus is concerned, we consider their position to be a knife in the back," the official stressed, adding that Belarus should respect Kiev's right to "defend our independence and sovereignty."

Minsk's formal response noted that actually, Belarus's position toward its neighbor "hasn't changed one iota," and that the so-called human rights questions brought up in the UN resolution "have no relation to the subject of Ukraine's territorial integrity." The spokesman added that Minsk considers the mechanism of country-specific resolutions a destructive and unjust tool dating back to the Cold War and used by individual countries to promote their own interests.

© Wikipedia
Ukrainian Media Claim New Grom-2 Short Range Missile System 'Can Strike Moscow'
In spite of their outwardly neutral status, Belarusian-Ukrainian relations have faced a series of diplomatic conflicts ever since the February 2014 Maidan coup d'état in Kiev. Belarusian President Alexander Lukashenko, intransigently opposed to color revolutions, has complained repeatedly about armed Ukrainian nationalists attempting to cross the border into Belarus. Amid NATO-backed training exercises in western Ukraine, Belarus has also stressed that it sees the deployment of NATO troops near Belarusian borders as one of its top security concerns.

Finally, last month, a minor diplomatic incident rocked relations between the two countries, after Kiev forced a Minsk-bound passenger plane to turn around mid-air and head back to Ukraine to remove one of the passengers for questioning. Ukrainian President Petro Poroshenko has since been forced to apologize for that incident.

Speaking to Belarusian opposition news website Charter97.org, Bohdan Yaremenko, a former diplomat and chair of the 'Maidan of Foreign Affairs Foundation' NGO, said that Tuesday's UN vote was proof that "official Minsk is not a friend of Ukraine," adding that it's time for Kiev to recognize that the "Lukashenko regime is a threat" to Kiev.

Belarus is "an ally and follower of the Russian Federation," Yaremenko stressed, and its vote showed that "it openly defended the interests of another state to the detriment of Belarusian-Ukrainian relations."

Speaking to Radio Sputnik about the broader significance of the Ukrainian resolution and Tuesday's vote, Crimean lawmaker Vladislav Ganzhara suggested that it was critical for Kiev to introduce this resolution now, before the new US administration takes office.

"Ukraine understands that the Obama administration is about to leave office, and that the foreign policy bloc in the US which so actively supported the regime in Kiev will undergo changes," the politician ntoed. "Donald Trump's words during the election campaign about considering recognition of Crimea as part of Russia is a now a serious concern for the regime in Ukraine."

© REUTERS / Carlo Allegri
Trump's Press Service 'Forgets' to Publish Details of Phone Call with Poroshenko
Regarding the allegations in the resolution, the Crimean politician said that he was "frankly fed up with Kiev's rhetoric, which has absolutely no basis in reality." Ganzhara pointed out that "since reunification, Crimea has been visited by many foreign delegations of various kinds, including from the European Union. And today, we hear more and more from politicians in Europe and elsewhere that Crimea is an integral part of Russia – that Crimea is developing – that there aren't any human rights violations."

Accordingly, Ganzhara proposed a different sort of resolution to the General Assembly, one which takes account of the fact that for over two years now, Kiev has engaged in criminal policy against Crimea, including a water, food and energy blockade, and even attempts by saboteurs affiliated with the Ukrainian Defense Ministry to stage acts of terrorism in the peninsula. "This kind of resolution would reflect the real situation," the lawmaker concluded.