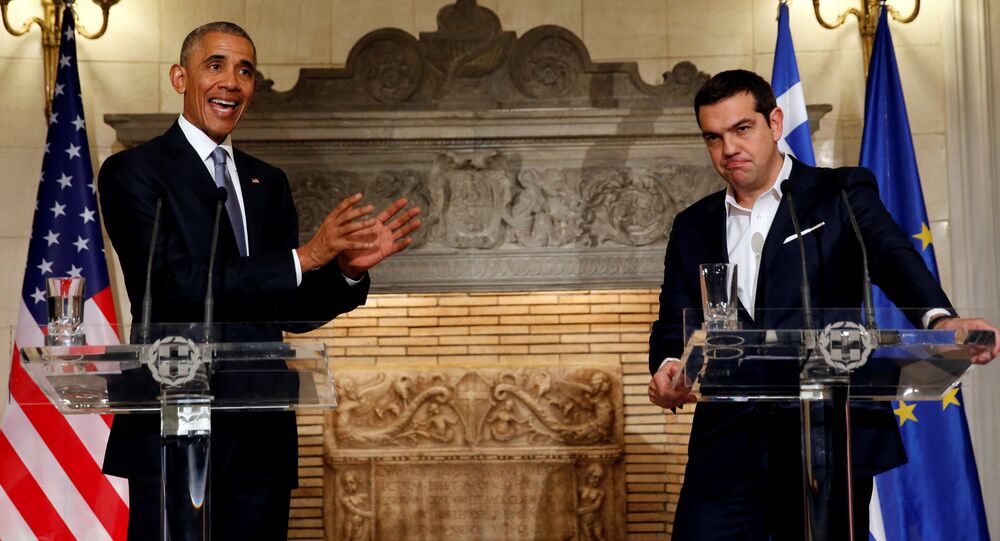 Outgoing US President Barack Obama has told Greece to continue with deeply unpopular economic reforms in an effort to win international backing for much needed debt relief to kick-start its economy, Sputnik has been told.

Greece is struggling to implement savage tax and public sector spending reforms as part of its third bailout by its creditors — the European Commission, the European Central Bank and the International Monetary Fund — despite widespread protests at the effect the austerity measures are having on the social fabric of the country.

Greece is now on its third bailout caused by the sovereign debt crisis which hit in 2007-8 and is struggling to implement a raft of reforms, including tax increases, major pension reforms and cuts to public spending, which creditors require to put its economy back on a stable footing.

​Obama is using his final European tour before handing over to Donald Trump to visit both Greece and Germany in the hope of leaving office with a positive message for Europe. However, any hopes that he would broker a debt relief package — writing off of part of its debts — have been dashed, according to a Greek political commentator.

"President Obama says we should go through the painful reforms and then go for debt relief. In many ways, Europe and Germany are saying the same thing: do the reforms and then we can talk about the debt," Pashos Mandravelis, a journalist who writes for the newspaper Kathimerini, told Sputnik.

"Obama is more Keynesian in mind than most other European countries, but — on the other hand — most European countries are paying, the US is not. Things are difficult here and there is unrest, but the point is, we should go through all these reforms and then we can talk about the end of austerity.

There had been calls for Germany — in particular — to allow Greece to write off part of its debt, in a similar model to that given to Germany following the Second World War. The London Agreement on German External Debts was a debt relief treaty between the Federal Republic of Germany and creditor nations, signed in 1953.

We warmly welcome in Athens @POTUS Barack Obama. A meeting of great importance for our country and Europe. pic.twitter.com/M0pe0sPr3O

Under the agreement, Germany was given 50 percent debt relief, allowing it to pay back the remainder over 30 years, but only when it was in trade surplus, which meant it had no payments to make until its economy grew and it was able to make the repayments.

However, Mandravelis told Sputnik: "Yes, but it was a world war. Germany was a destroyed country which could not produce anything. Greece can produce a lot of things but it needs to do some painful reforms.

"There is too much red tape. Greece's problems didn't come after a war. Greece has to go through these reforms — austerity is the product of these reforms."

​"Obama will have two messages for Tsipras: Greece has played a major and very positive role in the immigration crisis — something the government should take credit for; the second message is that Greece should do the reforms and then the Europeans should go for debt relief," Mandravelis told Sputnik.