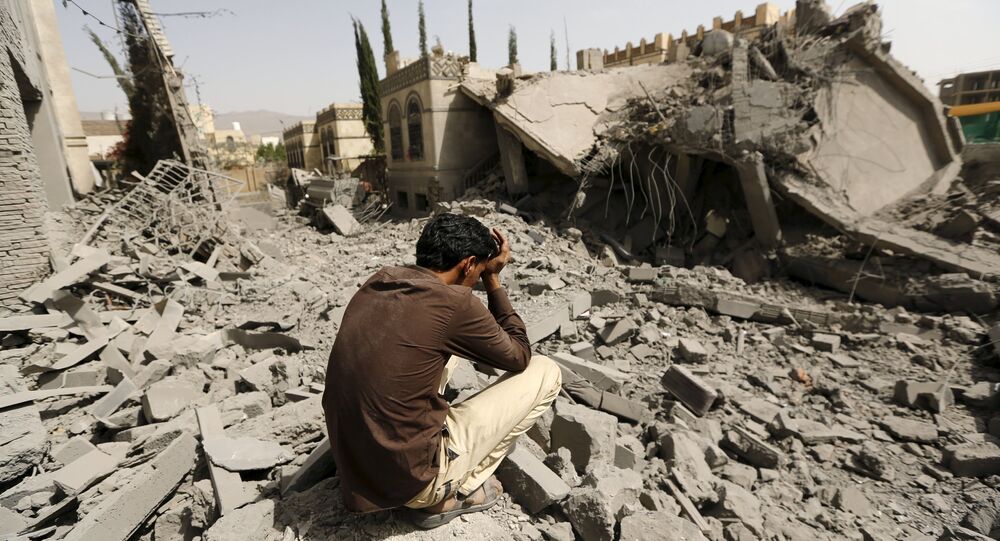 The UK has defended its sale of arms to Saudi Arabia, admitting that despite not having "access to all the information required," there was no clear risk of Saudi breaches of international law in Yemen. Critics have told Sputnik the government's actions are "nothing short of a disgrace."

In a response to findings from two parliamentary committees, which called for the UK to halt its arms exports to Saudi Arabia on human rights grounds, the government rejected the need to suspend the sale of weapons to the Gulf kingdom.

The government said it was seriously looking into claims that Saudi forces had violated international humanitarian law (IHL). However, information gathered from Saudi forces led the UK to conclude that there is no "clear risk" the sale of weapons to Saudi Arabia might be used in the violation of IHL in Yemen.

UK gov response to parl'y reports on arms exports to Saudi and the war in Yemen pub' ystrdy, avail at: https://t.co/s6KOi7XGp3

​The response comes after the UK business and international development select committees called for a halt to arms exports to Riyadh.

"Since September 2015, the Saudis have announced the results of nine investigations, despite having received evidence of at least 185 incidents from the UN, Human Rights Watch and Amnesty International. Moreover, a number of the Saudi investigations reported results which contradict evidence documented by the UN. This raises concerns about the credibility of the process," the report from both committees stated earlier this year.

​And while the UK government has rejected that its weapon sales are contributing to potential violations of IHL in Yemen, it did admit that it had not been able to paint a complete picture of the actions of the Saudi-led coalition operating in Yemen.

"UK Defense personnel are unable to form a complete understanding of the coalition's regard for international humanitarian law in Yemen as they do not have access to all the information required to do so," the government response said.

The UK has come under heavy criticism for its continued sale of arms to Saudi Arabia, with Riyadh accused of breaching international law by targeting civilian sites such as schools, hospitals and residential areas as part of its aerial offensive against Houthi rebels in Yemen.

The UN has estimated that Saudi-led coalition forces have been responsible for 60 percent of the 2,000 civilian deaths in Yemen since July 2015, however Riyadh has rejected claims that it has breached international law throughout the course of the conflict.

The #Saudi JIAT investigation however, which UK gov gives great credence to, does not have investigators on the ground #yemen

"First and foremost, we want to see the Saudis investigate allegations of breaches of IHL which are attributed to them; and for their investigations to be thorough and conclusive. Saudi Arabia has publicly stated that it is investigating reports of alleged violations of IHL, and that any lessons learned will be acted upon," the UK government statement said.

UK 'Nothing Short of a Disgrace'

The UK's continued sale of arms to Saudi Arabia and refusal to back an independent investigation has led to claims that London is shielding its ally Riyadh from objective scrutiny, and that the UK is in fact complicit in any potential violations of international law.

The UK is also facing a legal challenge — spearheaded by the London-based Campaign Against Arms Trade (CAAT) — over its arms exports to Saudi Arabia, with claims the government is breaching international arms sales laws as a result of the ongoing sale of weapons to Riyadh.

Westminster just voted AGAINST UN-led investigation into war crimes in Yemen and an end to the UK's arms sales to Saudi-Arabia. Disgraceful https://t.co/0aLCyu6Igl

​"Once again the Government is burying its head in the sand over the very clear risk that UK weapons sold to Saudi Arabia could be used to commit human rights violations in Yemen," Amnesty International UK's Arms Control Director, Oliver Sprague, told Sputnik.

"Thousands of Yemeni civilians have already been killed and injured in devastating Saudi-led airstrikes on hospitals, schools, funeral halls and homes — what clearer demonstration of the risk of sending more arms to Saudi Arabia does the Government need?"

The UK should immediately halt all arms sales to Saudi Arabia for use in #Yemen. Our Chief Exec @Mark_Goldring1 calls for action pic.twitter.com/cRlOCooTBB

"Ministers endlessly recycle phrases about supposedly 'robust' safety checks on UK arms exports while allowing a massive flow of weapons to Saudi Arabia even as the civilian death toll in Yemen grows and grows.