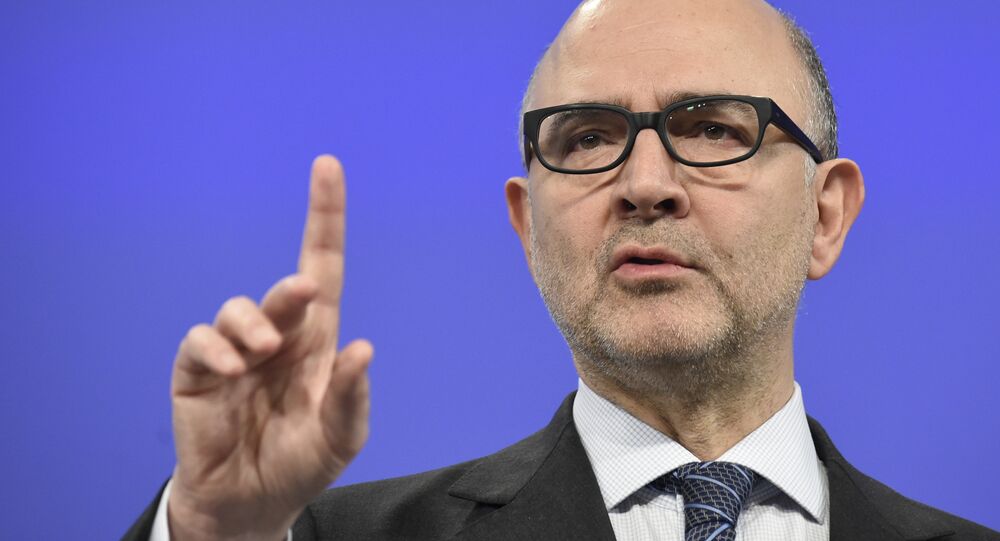 The current revolt against the political establishment and globalization in Europe could send the EU into a US-style leap into the unknown and potentially rip apart the European Union, EU Commissioner Pierre Moscovici has warned.

Moscovici, the EU Commissioner for Economic Affairs, acknowledged the growing sense of disillusionment with Europe's political elite, which he believed was tied to a perception that globalization has failed many people.

On behalf of @EU_Commission, let me say I am confident that the US will continue to be a strong and reliable partner for us @CES_Harvard pic.twitter.com/IVrN8A6XTg

​"The fact is that a growing part of our populations can no longer relate to the existing systems, and are seeking new ways of expression, and new representatives to deal with their concerns… These voters consider themselves the losers of globalization," Moscovici said during a speech at Harvard University.

The Frenchman said this angst had created a crisis of trust within Europe's establishment, noting that "we risk seeing more damaging protest votes, leading to more leaps into the unknown."

Trump's victory in the US has led to fears of similar anti-establishment, far-right political wins in Europe, with strong euroskeptic movements in France, the Netherlands and Austria.

To overcome #Europe's challenges, we need a more political Europe, with solid legitimacy and a stronger euro area @CES_Harvard @EUintheUS

In a nod to the increase in popularity of populist movements in Europe and the US, Moscovici acknowledged there was a backlash against those in power of Europe's main institutions.

​"Even if driven by anger, it is completely rational. They do not feel they have any objective interest in globalization. They feel they have been abandoned to their fate by an establishment that no longer cares to protect them."

A more political #Europe proudly fights for open societies and open economies, and stands against nationalism and protectionism @CES_Harvard

"We, the establishment, have become a category as identifiable as the losers of globalization. We are homogeneous, educated at the same schools, often from similar social and ethnic background. This clearly raises questions about the model of our educational systems and the functioning of our political parties."

The strong rhetoric from one of the EU's most respected senior officials has once again raised questions about the future of the EU amid an internal backlash against open borders and free markets.

"Nation states appear to be the only political vehicle able to provide efficient action, democratic acceptability and control of one's own destiny," he said.

​"This is a mirage, but it is a politically bankable one. As a result, our societies, our economies, our borders are at risk of closing themselves off, if we do not manage to strengthen the political contract between Europe and its citizens."

The warning about populism and anti-EU sentiment comes amid plans in some parts of the union to increase integration following the UK's decision to leave the EU.

The euro area must become the beating heart of #Europe. It should show that integration is not a problem, but the solution. @CES_Harvard pic.twitter.com/3NPz1QJcc5

​While Moscovici warned that moving too quickly towards further EU integration would be unwise given significant opposition in eastern and central European states, he called for a focus on the 19 Eurozone countries, which he described as the "beating heart" of the union.

Part of these plans included more cooperation across the Eurozone, including the adoption of "a real budget and creating a euro area minister of finance, accountable to the European parliament."

Juncker Says Brussels Should Show Donald Trump 'What Europe Is'