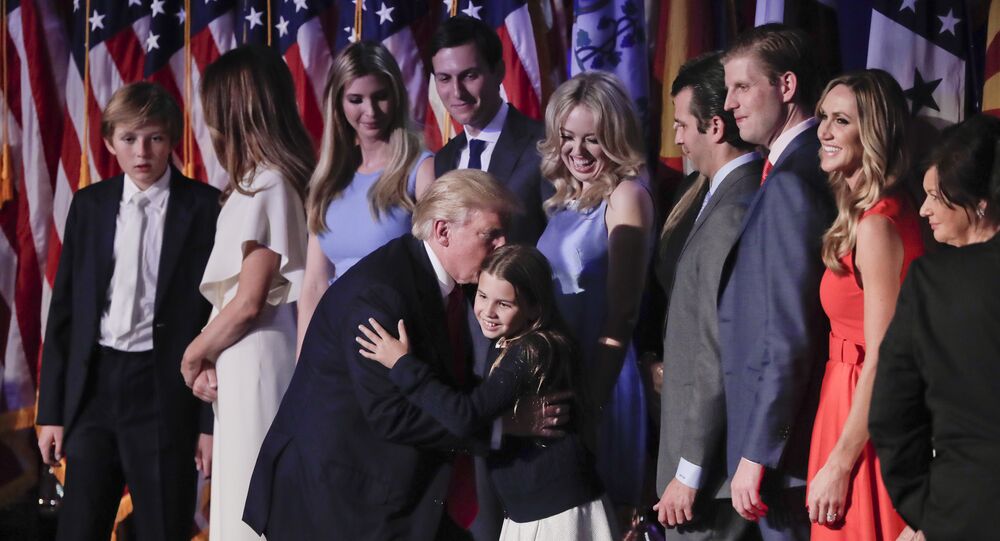 All in the Family: Fears of 'Trumpocracy' Sweep Scandinavia

Donald Trump has never been a media darling in Scandinavia. Even if the anti-Trump frenzy has somewhat calmed down following the US election, new fears have been added to Scandinavia's traditional concerns that include free trade, human rights and a Russian "aggression."

© AFP 2021 / Emmanuel DUNAND
Hate is the New Tolerance: Feminist Pop Idol Wants Elderly Trump-Voters Dead
According to Nordic political scientists, Donald Trump is likely to establish a clan of his own, as he steps into the White House in January. Through his numerous children, who are his closest political advisors and business associates, Trump is feared to make a new dynasty take root in the United States.

It is not unusual for American presidential candidates' relatives to be involved in campaigning. Never before, however, have they been so many (and so closely involved in their father's business), Finnish newspaper Hufvudstadsbladet pointed out. Trump's eldest daughter Ivanka (35), who runs several businesses, is estimated to have played a major part in Trump's victory by whitewashing some of her father's most controversial remarks with a more progressive image. Even Trump's sons Eric and Donald Jr, who occupy some of the top slots in the Trump Organization, also became important assets for Trump's campaign.

"It shows that the Trumps are a tight family and may evolve into a dynasty. Children are being trained to take over," Björn Ottosson, a political scientist at Stockholm University, told Hufvudstadsbladet.

© AP Photo / Jae C. Hong
Scandinavians Scared Trump's Triumph Spurs 'Russian Resurgence'
Ottoson drew suggestive comparisons with family dynasties such as the Kennedys and the Bushes, who nurtured several political leaders, while retaining a strong footing in the business world. The main difference according to Ottoson is that neither of the previous dynasties flashed their wealth in the same way Trump does.

Another source of headache for Nordic pundits is Trump's overwhelming power in office, which no US president has enjoyed since the 1930s. At present, the Republicans enjoy a majority in all instances, and their dominance may be further enhances as Trump is poised to nominate a new judge to the US Supreme Court. Additionally, the majority of US states currently have Republican governors, Oscar Winberg, a historian at Turku Academy, Finland, pointed out.

"I believe you have to go back to 1932, when Franklin D. Roosevelt was elected amid the Great Depression, to find a similar situation," Oscar Winberg told Hufvudstadbladet.

Whereas Sweden's Deputy Prime Minister Isabella Lövin was "close to tears" when she delivered a speech on the results of the US presidential election during a Green Party convention, stating that Swedes' dreams, visions and beliefs were lost, Finland's President Sauli Niinistö voiced a slightly optimistic approach.

© REUTERS / Brian Snyde
Fear and Loathing Spread in Scandinavia as Trump Sweeps to Victory
According to Finnish President, Donald Trump's victory may create opportunities to improve relations between Russia and the West. Additionally, Trump, who spoke warmly of the Russian leader Vladimir Putin and pledged to initiate a dialogue with Russia, may create a way out of the Syrian deadlock simply by treating Putin as an equal partner, Hufvudstadsbladet reported.

Four out of ten Norwegians believe that the risk of World War III has increased with Trump as US President. Additionally, 66 percent of respondents fell "more uneasy" compared to the 2012 election, when Barack Obama was re-elected, Norwegian newspaper Verdens Gang reported. In Norway's neighbor country Sweden, the percentage of panic-mongers appears to be even higher. A total of 83 percent of respondents voiced concern about the implications of the Trump presidency.

Trump's Victory Does Not Mean Trans-Pacific Partnership is 'Finished'