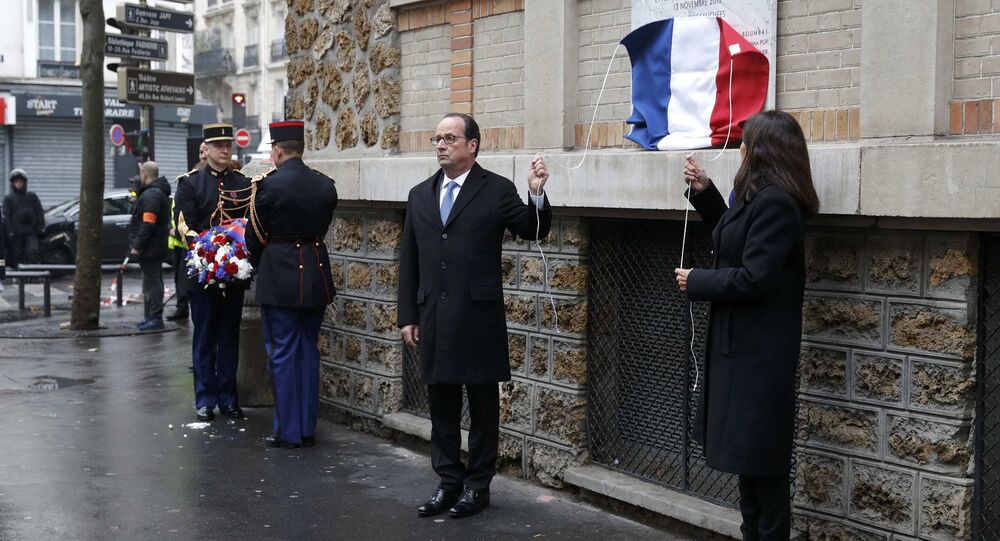 Memorial plaques were installed on Sunday at the locations of the November 2015 Paris attacks.

© REUTERS / Philippe Wojazer
Year After Paris Attacks EU Not Totally Safe Despite Heightened Security - Ex-Intel Officer
PARIS (Sputnik) — French President Francois Hollande, along with Paris Mayor Anne Hidalgo and Mayor of the Paris suburb of Saint-Denis Didier Paillard attended the ceremony of unveiling the first commemorative plaque at Stade de France, located in Saint-Denis, as the attacks began with three explosions set off next to the stadium.

The blasts rocked the area near the stadium, where the soccer match between France and Germany was underway at the time of Hollande's presence.

The president stood at all Sunday ceremonies of unveiling the plaques with the names of the victims and is currently at the Bataclan concert hall, the site of the deadliest massacre of the day, where 89 people were killed and over 200 wounded.

The remembrance ceremonies were held throughout Paris in places, where people were killed or wounded by terrorists a year ago.

On Friday, the soccer match between France and Sweden at Stade de France reportedly began with a minute of silence, as did Sting's concert reopening the Bataclan on Saturday.