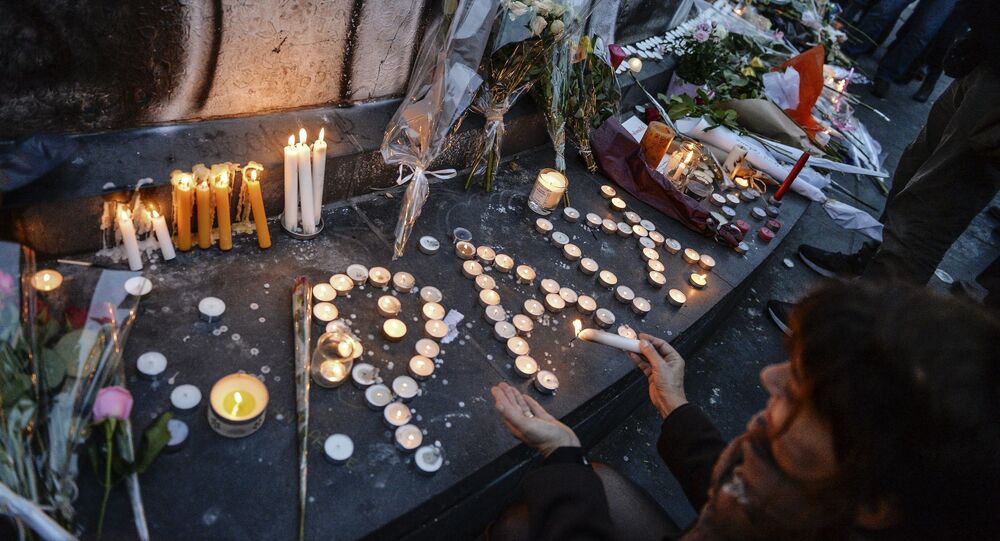 A year ago, on November 13, 2015, three coordinated groups of terrorists staged a series of attacks in Paris and the city’s northern suburb, Saint-Denis, which left 130 dead and over 350 wounded.

MOSCOW (Sputnik) — The attacks started soon after 9 p.m. local time (22:00 GMT). The first three explosions occurred outside Stade de France, a stadium in Saint-Denis. The jihadists detonated their suicide belts during a football game between France and Germany, which was attended by French President Francois Hollande.

The explosions occurred at two fast-food facilities and a bar located near the stadium. After the first two explosions, the president’s security service rushed him away from the stadium. The attacks in the vicinity of the sports facility resulted in deaths of three people.

The second group of terrorists of at least three people attacked cafes and restaurants in northeastern Paris.

Shooting was first reported from the bar dubbed Le Carillon, where a man wearing a mask opened fire from a semi-automatic gun. Witnesses said the man then crossed the road and started shooting at the Le Petit Cambodge (Little Cambodia) restaurant.

Several minutes later, gunmen opened fire on diners in a cafe in the Canal Saint Martin neighborhood. Police later found a car peppered with bullets and an abandoned motorcycle there.

Other attacks were reported on the restaurant La Belle Equipe, south of the first two attacks. Witnesses said that two gunmen aimed fire at people who were sitting on the terrace of the restaurant.

The French police stormed the concert hall after the commandos had contacted one of the attackers, who said they would not hold negotiations.

Police prefect Michel Cadot said the raid began at around 10 p.m. local time. One of the law enforcers killed a terrorist on the ground floor of the concert hall who was shooting at the hostages. Two other terrorists were upstairs and blew themselves up during the raid.

French officers from the Search and Intervention Brigade (Brigades de Recherche et d’Intervention or BRI) and RAID, a centralized unit that is used primarily for responding to large-scale terror incidents, conducted a joint operation at the Bataclan.

According to Cadot, the hostages whom terrorists had grouped around themselves in preparation for detonating their suicide belts managed to break out of the building during the police raid. The BRI unit ensured security at the scene. The operation lasted for three minutes.

In all, 89 people were killed at the Bataclan that night, including Nick Alexander, the Eagles of Death Metal’s merchandise manager. One more person who was wounded at the concert hall died on November 20.

According to Hollande, nationals of 19 countries were killed in the November attacks.

1 / 4
© AFP 2021 / Eric Fefeberg
A picture taken on January 7, 2016 shows a woman standing in front of a makeshift memorial for the victims of Paris attacks at the Place de la Republique in Paris.

After the spike in violence, the Paris Metro suspended service on lines which run through the city’s districts where the attacks had been committed.

The Daesh terrorist group, outlawed in Russia among other countries, claimed responsibility for the November acts of violence. The day after the terrorist attacks hit Paris, the group released a video without a date, threatening more assaults if France continued to bomb militants’ positions.

On the night of November 14, Hollande made a decision to declare a state of emergency throughout the country and to reintroduce border passport control. French authorities also mobilized at the highest level the country’s law enforcement and the military to ensure security in Paris following the attacks.

After the acts of violence, the Belgian government imposed checks on the border with France, at all airports and railway stations.

On November 14, the French president signed an order declaring three days of national mourning. At the same time, the Paris City Hall announced the closing of administrative departments in all the capital’s arrondissements as well as schools, museums, libraries, swimming pools and food markets. Public events were also canceled that day. The Eiffel Tower, one of the main tourist attractions of France, was also closed to the public.

A number of sports events that were due to held in France in the middle of November, including the Trophee Eric Bompard ISU Grand Prix figure skating competition, were also canceled.

© AP Photo / Philippe Wojazer
French President Francois Hollande delivers his speech during a ceremony to honor the 130 victims killed in the Nov. 13 attacks, in the courtyard of the Invalides in Paris, Friday, Nov. 27, 2015.

On November 15, Notre Dame de Paris cathedral hosted a funeral service in memory of those killed during the string of terrorist attacks and honoring their family members.

The Paris City Prosecutor’s Office opened a terrorist-related murder case dealing with six incidents. An investigation revealed that some masterminds and perpetrators of terrorist attacks in Paris, such as Salah Abdesalam, Ibrahim Abdeslam and Najim Laachraoui, had links to Belgium.

The Belgian Federal Prosecutor's Office said in a statement that it had launched a probe in connection with the terrorist attacks after the death of Belgian citizens in Paris, and that it was acting on four letters of request from French authorities. The French requests were linked with a Belgian-registered and hired car found near the Bataclan.

Investigators have identified a number of perpetrators and masterminds of the deadly attacks, including French citizens Bilal Hadfi, Samy Amimour, Ismael Omar Mostefai and Foued Mohamed Aggad among others. A number of them had already broken France’s legislation and had been detained by country’s law enforcers before the attacks. The list of attackers included names of people, who had visited the crisis-torn Syria before the attacks.

The investigation also showed that several jihadists related to the November acts of violence had also been involved in the attacks in Brussels in March 2016 that killed over 30 people and injured more than 300.

On November 8, it was revealed that the Belgian secret services conducting an investigation into the Paris and Brussels terrorist attacks had identified their supposed coordinator. According to media reports, he is a Belgian jihadist known as Oussama Ahmad Atar. It was reported that Atar had coordinated the terrorists’ moves from a location in Syria. Earlier, this was also found by the French investigators.