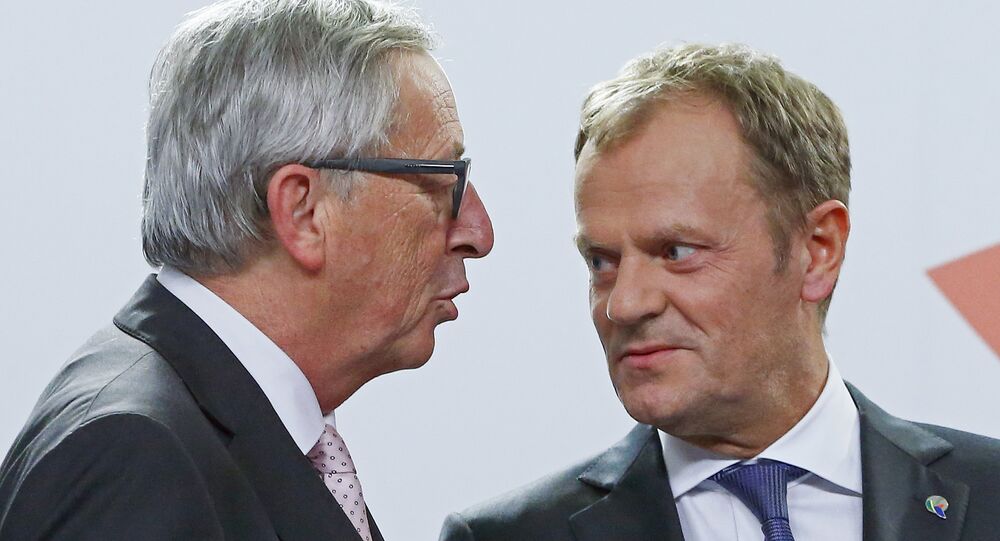 The political earthquake caused by Donald Trump's victory in the US Presidential elections and the decision by Britain to become the first member state to leave the European Union has sent shockwaves around Europe, fearing a backlash against the "arrogance of the political elite."

Europe is already facing major problems of trust in the institutions of the EU — the Barroso 'revolving doors' affair, tax evasion, the migrant crisis, troubles in the Eurozone and a lack of faith in the main institution of the EU.

European Commission President Jean-Claude Juncker admitted in his State of the Union speech in Strasbourg, September 14, 2016: "Our European Union is, at least in part, in an existential crisis. But never before have I seen such little common ground between our Member States. So few areas where they agree to work together.

EU & US have no option but cooperation. EU remains strong, reliable partner. We expect same from US & new President. https://t.co/Cfbvr5whaI

​Trump's path to the White House — and Britain's exit from the EU — were both the result of growing opposition to the political establishment and the disenfranchisement of ordinary people. Britain gave both Westminster and Brussels a kicking — nobody minded what Brexit would actually bring, as long as the politicians took a beating.

Manfred Weber MEP, Chairman of the EPP Group in the European Parliament, said: "The message is clear: it is now up to Europe. We must be more self-confident and assume more responsibility. We do not know what to expect from the USA."

"For the political culture in Europe, this is another wake-up call. We must consider the concerns and fears of the people more seriously and give concrete and realistic answers."

The Trump victory and Brexit will come as a massive warning to German Chancellor Angela Merkel and French President Francois Hollande, both of whom face elections in 2017, against a backdrop of deep unpopularity and rising right-wing populism.

"After decades of US politics dominated by the two main parties, Donald Trump's victory has highlighted the arrogance of the political elite in the US. For years, both Republicans and Democrats have preached to their voters that their own brand of democracy is superior and this has backfired spectacularly," said GUE/NGL President Gabi Zimmer in the parliament.

"No individual, party or specific group can claim democracy as their own. Similarly, no group or individual can decide for others what democracy means."

"Under the auspices of 'freedom', whole sections of US society have been socially, politically or economically excluded, exploited by a self-serving elite and where human rights violations are common."

​"For Europe, the imperative is an extremely challenging one: in the middle of all our internal turmoil and our external woes we must move quickly to build much stronger unity if we do not want to allow the fallout of the Trump presidency to undermine Europe's future."