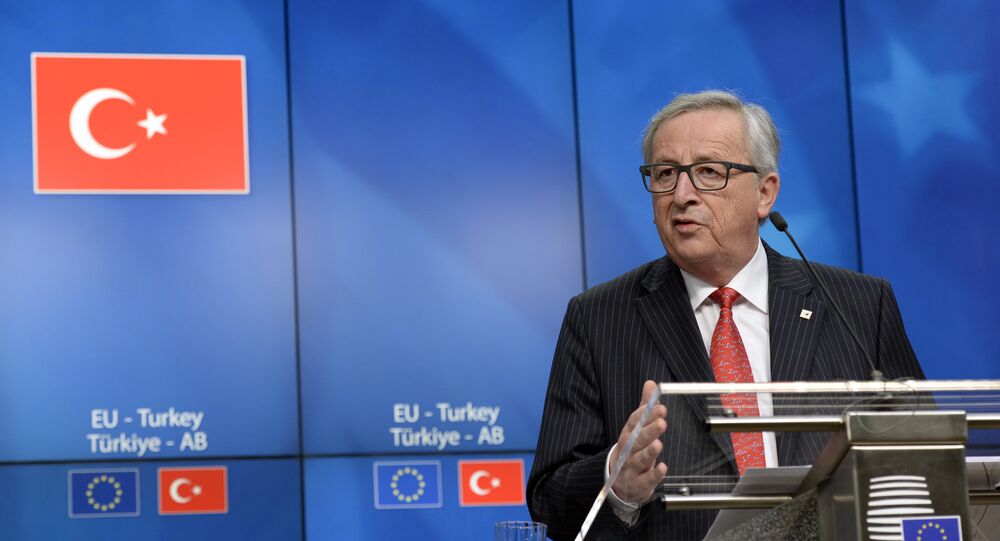 While the western world focuses on the United States and the 45th President-elect Donald Trump, the European Union is becoming further embroiled in a row with Turkey over Ankara's accession to the EU.

European Commission President Jean-Claude Juncker has accused Turkish President Erdogan of purposefully distancing himself from EU values, following the arrest of ten members of Turkey's pro-Kurdish party and staff at the Cumhuriyet newspaper.

© AFP 2020 / Adem Altan
Participants hold placards reading 'Free press can't be silenced' (C) and 'Do not touch Cumhuriyet' (R) outside the headquarters of Turkish newspaper Cumhuriyet in Ankara on October 31, 2016, during a protest against the detention of the newspaper's editor-in-chief and a dozen journalists and executives.

Juncker suggested that his actions raised questions over Turkey's accession to the EU and whether it was what Erdogan really wanted, suggesting that Ankara's bid to join the EU should be halted.

Brussels is ready for renewed accession talks to take place again, following a deal struck between Ankara and the EU, in which Turkey agreed to resettle refugees in return for visa-free travel for Turkish citizens within the EU.

However, Turkish President Erdogan doesn't think the EU will stop the negotiations because it's too scared of the consequences.

"They say unabashedly and shamelessly that the EU should review its negotiations with Turkey. You are late, go and review them as soon as you can. But don't just review them — go and make your final decision," Erdogan told a group of business leaders in Istanbul before making his final threat.

But Brussels says it's time Turkey came clean with "what they really want."

EU Enlargement Commissioner Johannes Hahn said: "It is time Ankara tells us what they really want," following the publication of a report examining Turkey's candidacy for EU membership and human rights standards following the clampdown on members of Turkey's pro-Kurdish party and media freedoms with arrest of Cumhuriyet newspaper staff.

"These various actions, including considerations of reintroducing the death penalty, seem to be increasingly incompatible with Turkey's official desire to become a member of the European Union," Hahn said, suggesting Ankara stopped "moving away from the EU."

Meanwhile, as relations between Ankara and Brussels continue to deteriorate, EC Presidents Donald Tusk and Jean-Claude Juncker, are re-focusing their attention over the Atlantic Sea towards US President-elect Donald Trump.

"We would like to take this opportunity and invite you, as soon as you get the chance, go to Europe and come to the EU-US summit," to "strengthen transatlantic relations," Tusk and Juncker said in a joint statement.

Turkish Prime Minister Binali Yildirim also expressed his congratulations to Donald Trump, saying that it was an opportunity to further bilateral relations.

Meanwhile, relations between the EU and Turkey worsen.