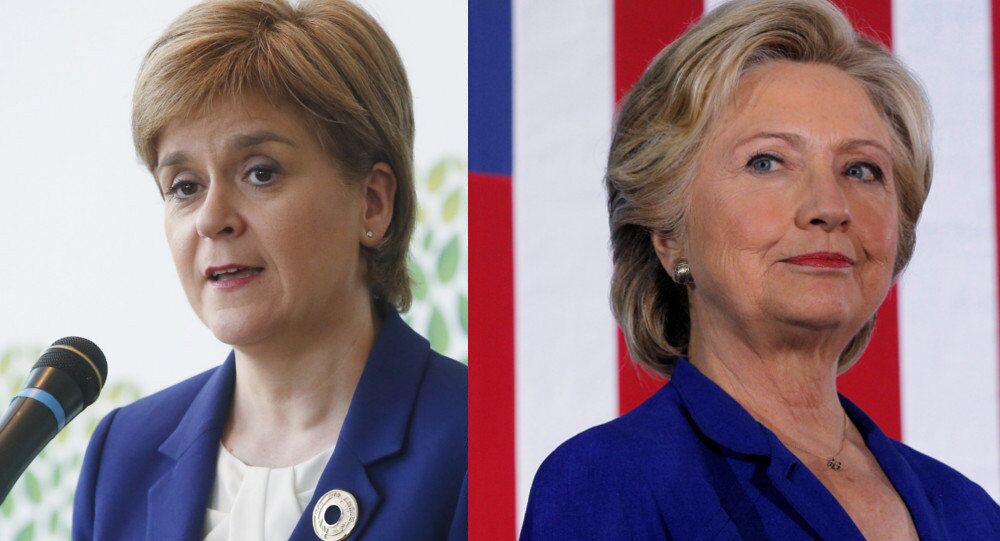 Social media has hit back at Scottish First Minister Nicola Sturgeon, who offered her public endorsement of US presidential hopeful Hillary Clinton.

Nicola Sturgeon's support for Clinton caused a Facebook backlash as critics argued that the Scottish first minister should keep quiet when it comes to US electoral politics.

The Scottish National Party (SNP) leader wrote in her column for the Sunday Mail, that she "fervently hopes" Clinton beats Republican rival Donald Trump in the November 8 vote.

"Her election would be a result which was warmly welcomed around the globe but would also mark the shattering of the glass ceiling in terms of equality for women," Sturgeon wrote.

"She is not perfect — what politician, anywhere, is?" Sturgeon added.

However social media has called into question whether politicians should be allowed to voice their opinions on political candidates.

Sturgeon posted the #ImWithHer slogan on her official Facebook page and social media users were quick to voice their anger, stating that the SNP leader should not speak out and that her comments do not represent the people of Scotland.

"I really hope someone at the SNP media office is taking note of these comments. Scotland does not support Hillary Clinton, this post should be removed as it's an insult to us all," one Facebook user said.

Another social media user called Clinton an abomination of a woman and said she was disappointed that Sturgeon would offer her support.

However not all comments made were derogatory of Sturgeon's endorsement. One user said that she also stood with Clinton and that Trump would be a terrible choice for president.

​Nicola Sturgeon was not the only politician to discuss the US presidential candidates. UK PM Theresa May, was criticized after a Downing Street spokesperson said on Monday, November 7, the prime minister wished both Trump and Clinton luck in Tuesday's election.

Liberal Democrat leader Tim Farron said of the comments: "Donald Trump is not just mad and bad but he's also dangerous. Why would you wish him luck? I have never seen anyone so unworthy of the office of the presidency in history."

History has also shown us that foreign leaders do like to wade into presidential elections. In the 2004 presidential fight, Vladimir Putin offered his own support for George W. Bush, justifying it with his support for the Republican incumbent's fight against terror.

"International terrorists have set as their goal inflicting the maximum damage to Bush, to prevent his election to a second term. If they succeed in doing that, they will celebrate a victory over America and over the entire anti-terror coalition," Putin told reporters.

© REUTERS / Jonathan Ernst
Trump or Clinton: Who'd be Best for Britain?
Putin was not the only foreign leader to offer support to a presidential hopeful, on the eve of the 2008 presidential election, Venezuelan leader Hugo Chavez, offered some limited support for current US President Barack Obama, praising the "arrival of a black president to the United States."

The US presidential election has made headline news for months and as D-Day approaches, the melting pot just got that little bit hotter.

However with all still to play for, even the slightest offer of endorsement from a leader of another country could potentially sway the minds of the electorate.

One thing is certain, this will go down in history as being one of the most controversial presidential elections ever.

Twist in History: Clinton, Hollande Descendants of the 'Accursed Kings'