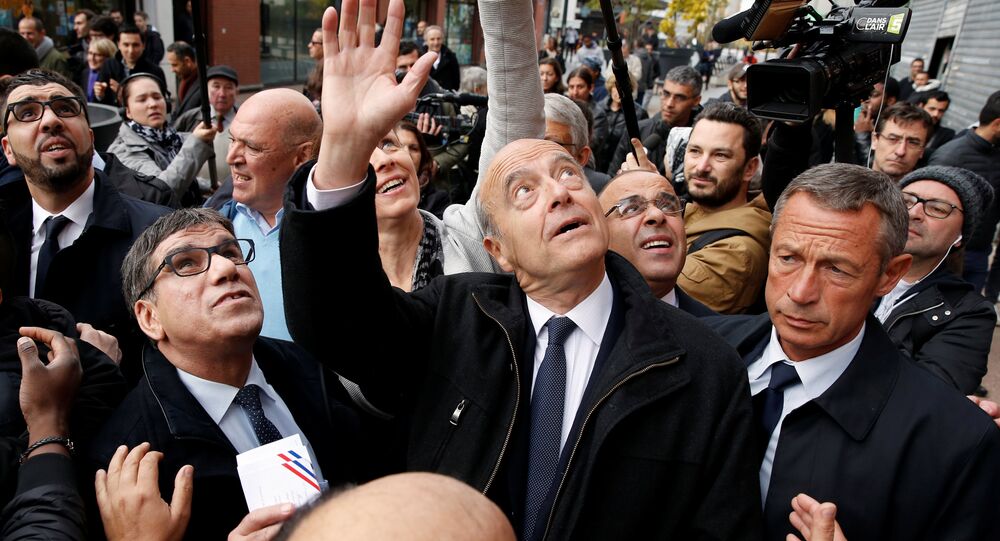 The French Republicans member Nicolas Dhuicq stated that former French Prime Minister Alain Juppe ould be a very bad choice in terms of the Russian-French relations because he is thinking only about federal Europe and the EU common defense, which does not exist.

"Juppe would be a very bad choice in terms of the Russian-French relations because he is thinking only about federal Europe and the EU common defense, which does not exist. Also he is really anti-Putin, so he is unlikely to work towards improving relationships between Moscow and Paris," Nicolas Dhuicq, who is also a member of the French National Assembly's defense committee, told Sputnik.

Juppe has been criticizing Sarkozy, who met Putin in June and promised to lift sanctions against Moscow once he becomes president. In his blog, Juppe wrote that the problem was not whether Sarkozy should be talking to Putin or not, but to make sure to define where the "red lines" were, such as "the annexation of Crimea, incursions on allied territory and implementation of Minsk agreements."

According to Dhuicq, Sarkozy, on the contrary, sees himself as "a true leader who is able to talk man to man with Vladimir Putin and to restore French-Russian ties."

© REUTERS / Philippe Wojazer
Sarkozy, Juppe Launch Center-Right Bid for French Presidency as Hollande Bombs
Dhuicq said France and Russia had a common enemy, which is the Islamic State (ISIL or Daesh) terrorist group, outlawed in both countries and active mainly in Syria and Iraq. During The Republicans' primary debate on Thursday, Sarkozy had also stressed the importance of Russia in solving conflicts in the Middle East.

The center-right lawmaker underlined that, personally, he supports former Prime Minister Francois Fillon, who is running third in their party's primaries, according to the recent polls. He noted that Fillon is another right-wing candidate who openly advocates a rapprochement with Russia.

France will elect a successor to President Francois Hollande next spring. Hollande is eligible to run, although opinion polls suggest his chances of winning are slim. In 2014, his administration joined EU-wide sanctions against Russia over its reunification with Crimea and announced a military operation against IS in Syria in November of that year.