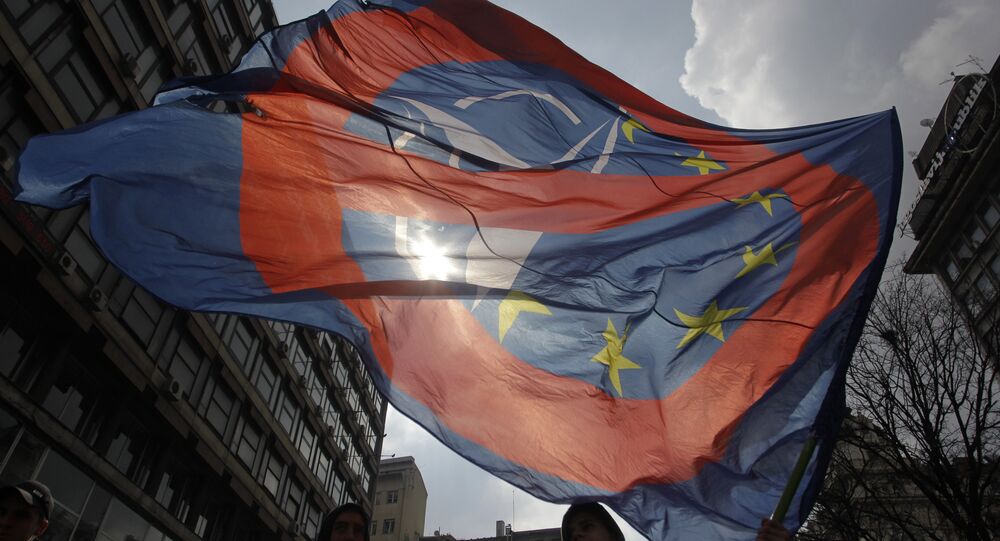 Following threats by NATO to deploy hundreds of thousands of troops to Europe, Dragana Trifkovic, director of Serbia's Center for Geostrategic Studies, told Sputnik that the alliance is putting the security of the continent at risk.

© Sputnik / Kirill Kallinikov
Russia's National Security Actions No Threat to Countries Unlike NATO's Expansion - Kremlin
On Monday NATO Secretary-General Jens Stoltenberg said that the alliance is placing hundreds of thousands of troops on higher alert amid growing tensions with Russia.

"We have seen Russia being much more active in many different ways… We have also seen Russia using propaganda in Europe among NATO allies and that is exactly the reason why NATO is responding. We are responding with the biggest reinforcement of our collective defense since the end of the Cold War," Stoltenberg said in an interview with The Times, published on Monday.

Dragana Trifkovic, director of Serbia's Center for Geostrategic Studies, told Sputnik that Stoltenberg's announcement is NATO's latest attempt to justify its military build-up in Europe, and clearly contradicts NATO's claim to have "strived to build a partnership with Russia" since the end of the Cold War.

"At NATO they say one thing one day, and the next day another. Unfortunately, you can't trust the alliance at all. You could say that the decision to strengthen (the NATO force) in Eastern Europe because of the 'danger' from Russia was already taken at the Warsaw summit in July," Trifkovic said.

NATO held its 27th NATO summit on July 8-9 in Warsaw, where the alliance's foreign ministers agreed to strengthen its military presence in Eastern Europe on a rotational basis with four battalions in Poland and in the Baltic nations.

"It seems to me that above all, this is connected to the conflict the US has with Russia through NATO, where the Americans have a lot of influence. You shouldn't believe them, when in the alliance they say that NATO is trying to improve its relationship with Russia, because the alliance behaves aggressively toward Russia," Trifkovic said.

The analyst added that contrary to NATO's accusation that Russia is "using propaganda in Europe," in fact NATO members are intent on portraying Russia as an enemy in order to justify the organization's continuing existence and expansion.

"I live in Serbia and I can say that an information war is being waged here via the Western media – apparently Russia presents some kind of threat to Europe. There is constantly anti-Russian propaganda, they say that Russia is apparently an aggressive country, but that's not true actually. It's enough to see that there are NATO and US bases in Europe, there aren't any Russian bases. In fact, they have surrounded Russia from all sides" Trifkovic said.

Since the end of the Cold War, NATO has concerned itself to a large extent with disastrous Middle Eastern interventions which enabled the rise of Daesh and other militant Islamist groups.

© AP Photo
Afghan Civilians Outraged by NATO Airstrikes Seek Revenge
However, the efforts of Russia, Iran and other regional players to defeat terrorism have led the alliance to again seek confrontation with Russia. In doing so, NATO hopes to district attention from its failure to prevent terrorism, Trifkovic said.

"When the Warsaw Pact ceased to exist, the question arose – what kind of role does NATO have after that? They don't solve the problem of terrorism, they have a duty to defend NATO member states but there have been terror acts in France and Germany. So, NATO is not protecting the countries of the alliance."

Rather than looking to NATO for protection, European states should seek to co-operate with Russia in the effort to prevent terrorism, Trifkovic said.

"We see, for example, that in the Middle East, when the US was battling with terrorists there, there were no results. But Russia has real success and is in fact resolving problems with the aim of protecting the US and NATO."

Over 700 troops from the three countries are taking part in the drills, which include tactical and firearms tasks to improve operational capabilities in multinational counterterrorism operations.

NATO continues to insist that Serbia, like neighboring Montenegro, will one day join the alliance in spite of popular opposition.

© Sputnik / Ruslan Krivobok
The Price of Neutrality: Serbia Caught in Between EU-NATO and Russia
On Monday former NATO Secretary-General Anders Folg Rasmussen told the US government's Radio Free Liberty that Serbia should follow Montenegro into what he called "Euro-Atlantic institutions."

"At the end of the day, Serbia knows very well that its future lies inside Euro-Atlantic institutions, firstly in the EU and likewise I think in the long-term in NATO membership," Rasmussen said.

However, earlier this year Serbian President Tomislav Nikolic said that Serbia remains steadfast in its rejection of the alliance, and declared that "we aren't going into NATO."

"Russia knows that Serbian citizens do not want their country to join the alliance," he told Sputnik.

US Should Mend Fences With Russia, Shut Down NATO - Ex-Presidential Candidate

Russia's Security Actions No Threat to Countries Unlike NATO's Expansion