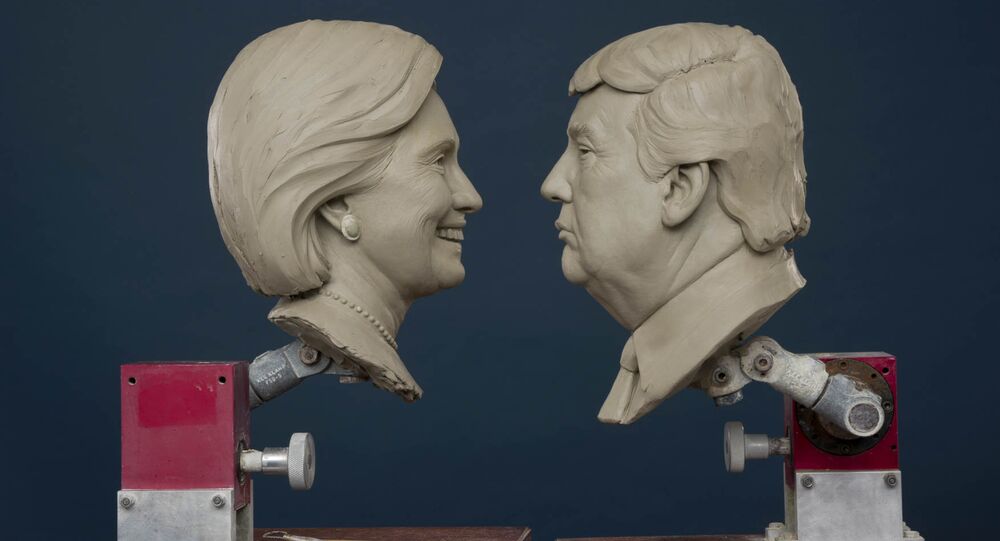 US election day is nearly here and the world is waiting with bated breath as Trump and Clinton face off at the polls over who will become the 45th President of the United States of America. However, over in London, there will be a contest over a different legacy: who is to be immortalized in wax at Madam Tussauds, and who will lose their head?

In a visual demonstration of just how close this divisive, sensational 2016 US election has been, for the first time in history, the creation of the next US President's Madame Tussauds figure began early, even before their respective political parties officially announced their nominees. On Monday, November 7, the world famous tourist attraction unveiled images of the early stages of the clay replicas of both presidential candidates.

A smiling Mrs. Clinton is perched next to an imperious-looking Mr. Trump.

Whoever wins, it has already been a long road for the sculptors at Madame Tussauds.

The creation process began at Madame Tussauds' studios in West London in June, with sculpting of the clay heads to perfectly capture each individual candidate's likeness. If elected, sculptors will have their work cut out for them to perfectly capture Trumps infamous hairstyle. The styling team have reportedly already been practicing hard.

"Knowing how many eyes are diligently watching this election, has made these sculptures even more exciting to work on than usual. I cannot wait to see which candidate will be victorious and who we'll get to make a wax figure of."

In a presidential race already filled with historic firsts, 2016 also marks the first time in Madame Tussauds' history that both candidates have already had full wax versions of themselves. Clinton's was created in 2006 and Trump's back in 1997.

Once a winner is announced, it will then Madame Tussauds' sculptors and stylists several more weeks to get to the finished product in time for inauguration day in January.

"Anyone and everyone is discussing the race to The White House right now; it's the most scrutinized US election in recent memory. With polarizing candidates at the forefront, it's certainly an interesting time for us to be making a figure of a new President of the United States."

In less than two days they, and the rest of the world, will have their winner. So, who will be immortalized in wax at the world famous attraction as the 45th US President? Will Trump triumph or will Clinton clinch it? Right now, it's too close to call.

The result of the election is likely to be known in the early hours of November 9.