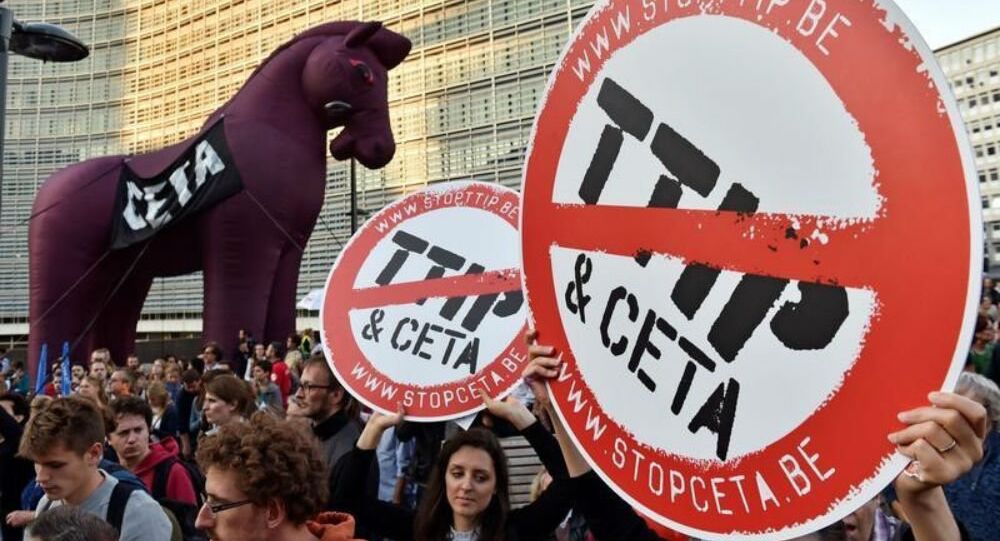 CETA's "negotiations process has shown that bureaucrats in Brussels have baked major unexpected and unwelcome surprises for the EU citizens at their secret kitchen," he said.

Mastalka drew parallels between CETA and the EU Constitution, a 2004 treaty which was not ratified by all EU member states and was later replaced by the Treaty of Lisbon.

© REUTERS / Agencja Gazeta
'Dangerous' CETA: EU-Canada Deal Will Damage European Economy, Put 'Health and Safety' at Risk
"The Lisbon Treaty appeared after the French and the Dutch rejected the [EU Constitution]. The Irish rejected the Lisbon Treaty, but voted in favor [of the document] at the second referendum when the country was promised additional rights. [This is how Brussels] pushed through the necessary decision. We have witnessed a similar situation" with CETA, he explained.

The deal will not enter into force unless the European Parliament gives its consent, but Mastalka said that MEPs have had virtually no say in the matter.

"We were practically unable to track [CETA] negotiations on a regular basis or learn the stance of the European Commission on the issue. Lawmakers were allowed to take part in the talks occasionally and only after a tussle," he said, adding that representatives of trade unions, consumer advocates and the media were also absent from the negotiations. "At the same time multinational corporations were there."

In Mastalka's opinion, CETA negotiations serve as a fine example of how Brussels deals with similar issues at the moment.

The Czech lawmaker further mentioned that experts have raised doubts over CETA's supposed positive implications for European consumers and businesses since quality standards are higher in the EU than in Canada.

"For instance, the Czech Republic is opposed to genetically modified organisms (GMO), while Canada is the third largest GMO producer in the world. Will our consumers and producers benefit from this? What if instead of 1 million new jobs they have promised there will be more cuts due to [European] companies going out of business? It is anyone's guess. They have decided everything for us behind closed doors. This is a bad signal," he said.

The politician further warned that CETA could throw Europe back to the Middle Ages in terms of consumer protection and labor rights.