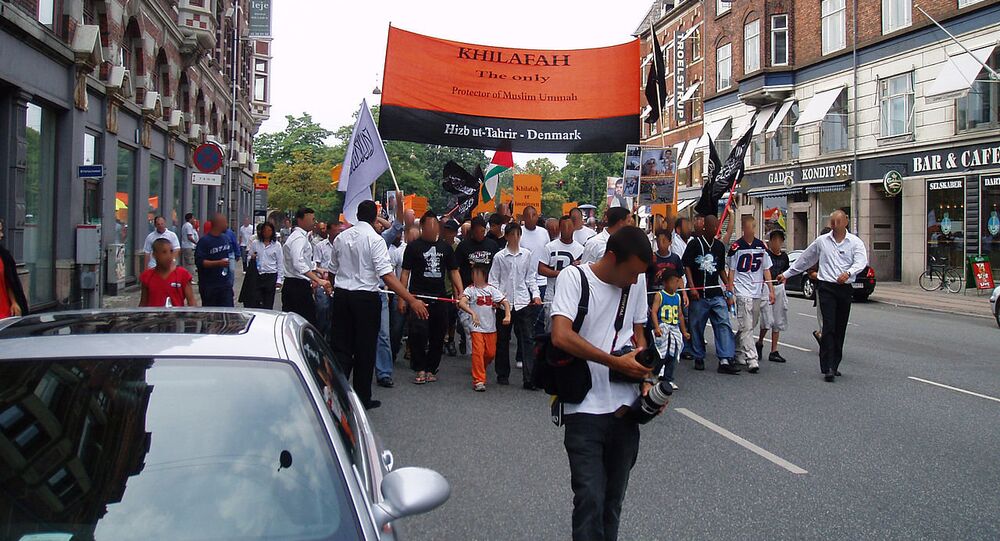 On October 6, Hizb ut-Tahrir held its presumably last conference in state premises in Copenhagen. Remarkably, the conference sparked outrage among residents. Eggs and stones were thrown, as protesters clashed with supporters of the controversial Islamist organization.

The leftist demonstration was led by Jaleh Tavakoli, who voiced her worries about Islamist social control in the Muslim communities, which is said to particularly affect women and homosexuals. The right-wing activists For Freedom, formerly known as Pegida Denmark, who settled down nearby, waved Danish national banners and posters reading "Burka — Not in Our Country!" Finally, Hizb ut-Tahrir supporters formed a demonstration of their own. Tempers started to seethe over, as eggs and stones were hurled, Danish daily Berlingske reported.

Earlier this year, Danish officials agreed to bar Hizb ut-Tahrir from "undermining democracy" in state-owned premises. The goal is to make sure that local authorities stop giving Islamist access to state-funded rooms and locations.

"Hopefully, this was the last time that Hizb ut-Tahrir was allowed use the communal rooms to undermine equality and condone discrimination by dividing the hall into a men's and women's sections. It is important to stand up and say no to their wildly far-fetched ideas and the social control they promote in Muslim communities," Jaleh Tavakoli, left-wing activist blogging for Danish newspaper Jyllands-Posten, told Danish daily Berlingske, citing "religious fascism" on Hizb ut-Tahrir's part.

© Flickr / lukestehr
Copenhagen Gives Go-Ahead to God-Free Faith-Neutral Church
According to Hizb ut-Tahrir representatives, the ban from state-owned premises won't be of any drastic effect, since other places to gather will be found.

"It would be a declaration of bankruptcy to believe that our critical voices may be silenced. In practice, this will have no effect. We have other options," Junes Kock, a media representative of Hizb-ut Tahrir Scandinavia, told Berlingske.

Hizb-ut Tahrir, which aims at replacing the democratic society with a caliphate and establishing the radical Islamic sharia law has already been banned in a number of countries, including Germany, Russia, Turkey and all but three Arab nations. Earlier, Hizb-ut-Tahrir representatives claimed that forcing Muslims to accept democracy was the same as asking them to drink alcohol.

In Denmark, the fight to ban Hizb ut-Tahrir has been led by the right-wing Danish People's Party. So far, the party's initiative only resulted in the ban from municipal premises.

"They are Islamists who work to broaden Islam's stance in Denmark. I'm firmly against this, as Islam over long distances is incompatible with Danish culture," Martin Henriksen of the Danish People's Party told the Danish tabloid newspaper BT.

© AFP 2021 / Asger Ladefoged / Scanpix Denmark
The Usual Suspects: Foreign Crime Doubles in Denmark
Hizb ut-Tahrir is an international Sunni Islamist political party, founded in Jerusalem in 1953. Today, it is active in more than 40 countries, numbers around one million active members and is working to unify all Muslims under one Islamic rule (caliphate) and Islamic law (sharia). According to Hizb ut-Tahrir Scandinavia, its goal is to preserve the Islamic identity, as Muslims in the West are being exposed to "aggressive indoctrination" and "thought control."

Of approximately a quarter of a million Muslims living in Denmark, there are some 100-150 full members of Hizb ut-Tahrir, which has been active in Scandinavia since the early 1990s.

Poverty on the Rise in Danish Welfare State