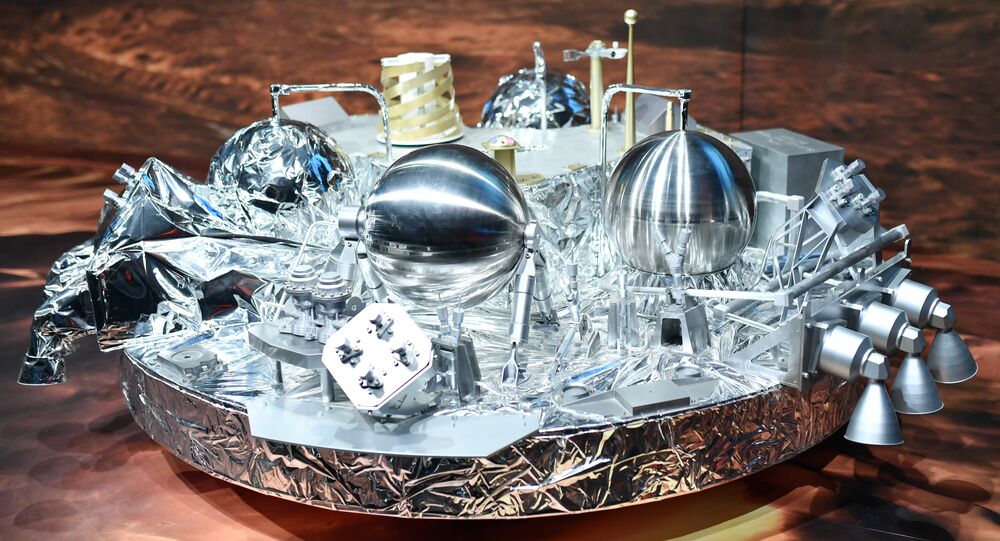 NASA's Mars Reconnaissance Orbiter (MRO) has beamed the first color images of the crash site of Europe's Schiaparelli test lander, which hit the surface of the Red Planet on October 19.

Clearly seen on the photographs are a dark splotch apparently left by the lander’s exploding engines and bright spots interpreted as the lander’s parachute, heat shields and chunks of the blown-up probe itself.

The Schiaparelli lander, one component of the ExoMars 2016 project, which is being jointly implemented by the European Space Agency and Russia’s Roscosmos, slammed into the Martian surface on Meridian Plato close to the planet’s equator on October 19.

© AP Photo / ESA/D. Ducros
Earth, We Have a Problem: ExoMars' Schiaparelli Lander Loses Signal Transmission
The probe stopped beaming data to mission control about 50 seconds before impact, just as it was about to deploy its parachute. ESA experts believe that something “unexpected” had happened to the lander’s radars.

NASA's Mars Reconnaissance Orbiter then spotted Schiaparelli's remains with its low-resolution camera, but the black-and-white images were not clear enough to show what really had happened to the lander.

On November 1, however, MRO used its High Resolution Imaging Science Experiment (HiRISE) camera to obtain color images of the crash site and bring it into full focus.

ESA experts hope that further examination of the present images and of the ones NASA has promised to obtain two weeks from now, will help determine the exact cause of Schiaparelli’s crash.