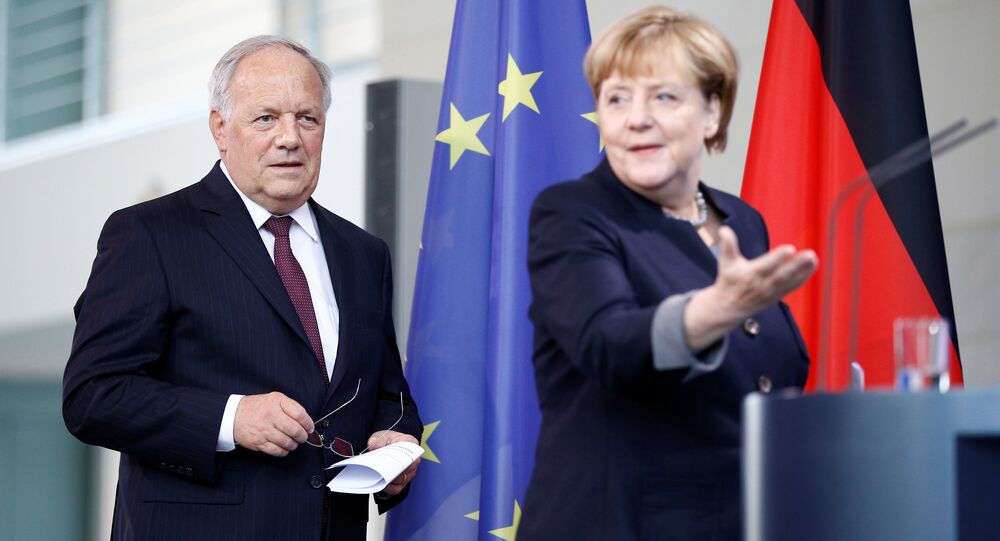 EU-Swiss talks regarding plans to introduce immigration controls in Switzerland shouldn’t be linked in any way to upcoming Brexit negotiations with the UK, German Chancellor Angela Merkel has said amid an ongoing stalemate between Brussels and Bern.

Speaking on Wednesday, November 2, following a meeting with Swiss President Johann Schneider-Ammann, Merkel said the UK's divorce talks with the EU should not have any impact on Switzerland's ongoing discussions with the bloc.

"If I tried to put myself in the shoes of a Swiss citizen, I wouldn't be pleased if it was suddenly cast in a new light because of another decision in another country," Merkel said.

Merkel: “In the EU, we should carry on negotiations with Switzerland in the same way as we would have if there were no question on Britain”

​"That's why we should conduct these talks with Switzerland as if the Great Britain issue never existed. I can only say that the German position hasn't changed with Great Britain's decision. These are two completely different issues."

Merkel's comments come as EU leaders increasingly attempt to draw a distinction between Swiss and British attempts to implement immigration controls and remain in the Europeans single market, amid fears British negotiators may interpret any Swiss deal as a precedent for Brexit talks.

Ahead of meeting w/ Merkel, Switzerland’s president said the country will reduce EU immigration, even if it violates bilateral treaties.

​However, the chancellor's insistence that EU and Switzerland officials should ignore the "Great Britain issue" directly contradicts comments made by European Commission President Jean-Claude Juncker, who said the two situations were "interlinked."

"We are discussing with Switzerland, we have Britain in mind, because these questions are interlinked," Juncker said following meetings with Schneider-Ammann in September.

Swiss officials are facing a race against the clock to introduce immigration controls after 50.3 percent of the population voted in favor of a "stop mass immigration" referendum in 2014.

This means the Swiss government must enact a law on the subject by February 2017, with fears that introducing such controls would almost certainly inhibit the EU's freedom of movement principle and lock Bern out of the European single market.

​While Switzerland is not an EU member state, it is part of the EU's passport-free travel zone, with the bloc's citizens free to live and work in Switzerland without special permission.

Given the strong economic and cultural ties between Switzerland and the EU, there is significant political will to come up with a deal that would keep the Swiss in the single market, however many have noted that negotiations have taken on increased significance since the UK's June 23 vote to leave the EU.

There are fears that any favorable deal for Switzerland could be used as a precedent for the UK, with Prime Minister Theresa May announcing plans to reduce EU immigration into Britain, while ministers have spoken of trying to keep some access to the single market.

With four months until Switzerland's February 2017 deadline to enact immigration legislation, EU officials have increasingly been looking at ways to differentiate between the Swiss and British situations.

Despite acknowledging that Brexit had added "another element" to the difficult discussions with Switzerland, Juncker earlier called for a "Swiss-specific" deal between the two parties, while Merkel reinforced the need to try and find a unique solution with officials in Bern.

Switzerland may hold a second referendum. Justice Minister: voters have to decide "restrict free movement or single market, can't have both" pic.twitter.com/p3JJPVtcIL

​One such plan to introduce immigration controls but remain in the single market is through a proposal that would give Swiss people preferential treatment over EU citizens when it comes to employment.

Even though the plan has been passed by the Swiss government's lower house, it has not yet been discussed in the upper house, while it is not clear if such a proposal would satisfactorily meet the 2014 referendum criteria, with right-wing parties in the country calling for stricter immigration controls.

Talks between the EU and Switzerland are expected to continue in December.