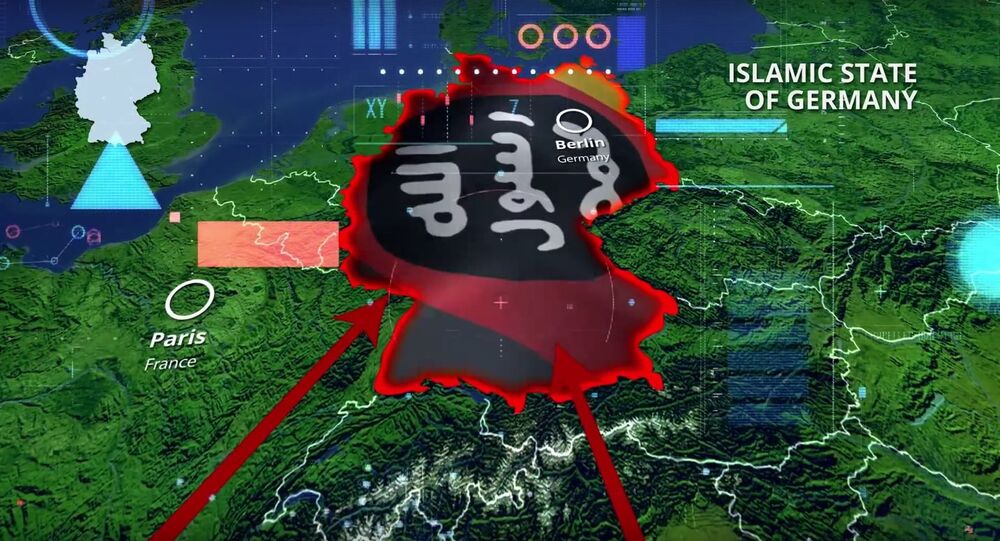 Secure America Now, a conservative US non-profit focused on informing the public about foreign policy issues, has released a controversial video called 'Welcome to the Islamic State of Germany', satirizing the possible consequences of Germany's migrant crisis resulting in the country's transformation into an Islamist caliphate.

The provocative video was originally published for American audience, and aimed primarily at undecided voters in the swing states of Nevada, North Carolina and Florida. It facetiously talks about 'the infiltration of refugees', which "has allowed our brave jihadi fighters to conquer, conform and convert Germany, extending our caliphate."

Today, the voiceover says, radicals are free to "enjoy everything Germany has to offer," from pleasant hikes in the Black Forest, to a pork and alcohol-free Oktoberfest, to famous German cathedrals converted into Islamic star-and-crescent topped mosques. The video concludes by inviting Islamist extremists to 'experience a new culture of Islam' against the background of a Daesh livery jetliner.

Secure America Now, a US non-profit supporting Republican presidential candidate Donald Trump's tough approach to border control, has been tweeting the video along with the tagline 'Germany has lost control of its borders. We must not let this happen in the United States! Retweet if you agree.'

© AP Photo / Markus Schreiber
Strangers in Their Homeland: Germans Leaving Germany En Masse Due to Migrants
In the course of the campaign, Trump has repeatedly addressed the subject of refugees, and the accompanying dangers posed by terrorist groups. The candidate has repeatedly criticized Chancellor Merkel's refugee policy, which he warned "can lead to [Europe's] collapse."

Trump has also suggested that his opponent Hillary Clinton "wants to be America's Angela Merkel. And you know what a disaster this massive immigration has been to Germany and the people of Germany – crime has risen to levels that no one thought they would ever see. We have enough problems in our country, we don't need another one."

As expected, given the subject matter, German media soon got ahold of the video. Quickly spreading to the German social media, the video also sparked a debate between supporters and opponents of Berlin's immigration policy; supporters called the video black propaganda, opponents suggested that it has a grain of truth.

© REUTERS / Michaela Rehle
Does Migrant With 4 Wives, 23 Children Get €360,000 a Year in Germany? Town Mayor Reveals the Truth
In addition to making videos for a number of Republican politicians, Harris Media, the Texas-based agency which created the video, has also created content for UKIP, the main proponents of the UK's exit from the UK, and for the Israeli Likud Party.

Speaking to Berliner Morgenpost, Harris Media owner Vincent Harris said that the purpose of the video was to raise awareness of an important topic, "irrespective of the US election." Harris added that he was personally very fond of Germany, and has participated at an Oktoberfest wearing lederhosen.

According to Bild Online, Secure America Now has plans to release another video, probably before elections, dedicated to the threat of an 'Islamic State of America,' lampooning how the United States might look under Islamist influence.

Commenting on the video, Sputnik Germany pointed out that "in contrast to German media, which unanimously condemned the video, Spiegel Online calling it 'not only creepy, but outrageous and perhaps inciting ethnic hatred, and Bild 'absurd and populist', social media users were not as unanimous in their assessment."

Some users called the video and the Republican candidate "sick."

Others suggested that unfortunately, the video is "not entirely unreasonable."

​"Can this video cause anxiety among Germans? Yes. Are these fears unfounded? No!"

​"So this is what it has come to. Trump is using Merkel as a warning example."

@SecureAmerica oh no 😫used to live there many years, can't believe it changed so much due to their mass of refugees.. I'm sad 😭