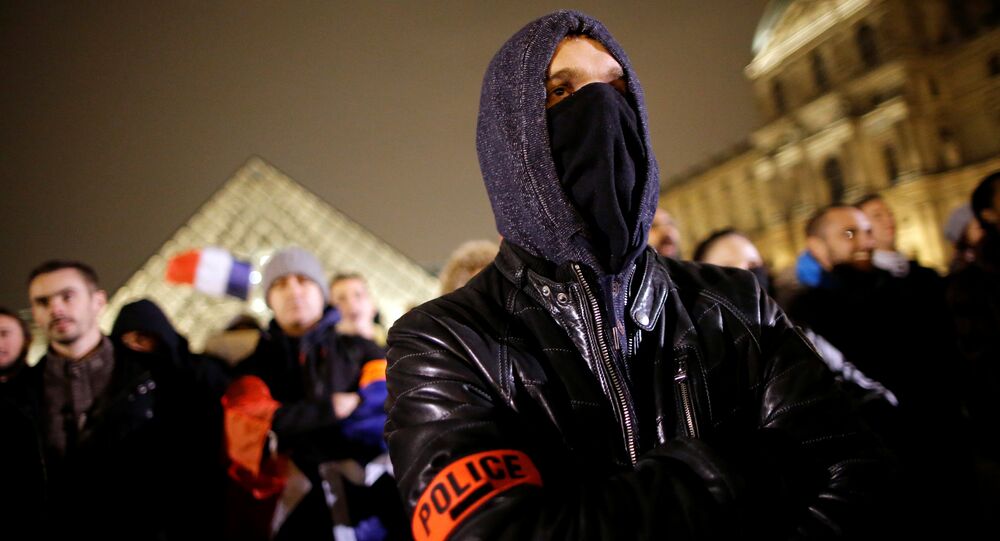 French Police Protest Against Own Unions and Government as 'Malaise' Deepens

Police in France - already staging widespread protests over lack of staff, resources and support by the government - have now turned their anger on their own bosses as officer complaining of exhaustion after months of counterterrorism duties as morale plummets.

Hundreds of police officers demonstrated outside the Louvre in Paris, Tuesday night, in protest — not just at the government, but against their own unions — a major manifestation of their anger at the political establishments, but also their own.

They are demanding direct talks with the government of Francois Hollande, saying they are exhausted and that moral is at rock bottom. They have been staging protests over the past two weeks in major cities, including Paris, Marseilles, Bordeaux, Nancy and Toulouse, over staff shortages, poor equipment and bad leadership which has left them exhausted and frustrated as France has tried to tackle the increased terror threat since the Paris attacks of 2015.

However, years of cutbacks by successive governments have left the police understaffed and — in many areas — there has been no effective police presence for years, leading to no-go zones which have been seized upon by gangs.

This, in turn, has led to police being attacked when trying to enforce the state of emergency.

In the most serious of these, an officer was seriously injured in a Molotov cocktail attack in Viry-Chatillon, a notoriously crime-ridden commune in the southern suburbs of Paris on October 8. Others were injured and are still receiving treatment.

French President Francois Hollande and his embattled Interior Minister Bernard Cazeneuve, were forced to promise emergency funding of US$273 million to the police and other provisions amid growing anger in the law enforcement agencies over chronic cuts, poor equipment and lack of protection.

However, the police say this is not enough. Many are calling for a major shake-up in the way the law enforcements agencies are organized, following criticism of a lack of coordination at the Bastille Day atrocity in Nice, where it was alleged there were two few local police on duty on what was a high-threat event.

"The government wanted to buy peace by throwing money at it, but it must understand that the malaise runs deeper. We need all the police to be united, but out unions are too often on the side of power. They put themselves before the public interest," one officer — who asked to remain anonymous — told France 24.

Law enforcement in France operates in silos, with two national police forces — the Police nationale and the Gendarmerie nationale. To complicate matters, in Paris, the Prefecture of Police is a subdivision of France's Ministry of the Interior.

Meanwhile, a large number of local authorities employ their own local forces, known as the Police municipal, who are answerable to the municipality's mayor.

🆘‼️🔥 Today in #Paris: clashes between riot police and Afghan / Eritrean migrants in the evacuation of the illegal camp "Stalingrad". pic.twitter.com/A994Jd3VFj

​France also has six intelligence services operating under the defense, interior and economy ministries. A French parliamentary investigation into the Paris terrorist attacks blamed a "global failure" of French intelligence and called for a total shakeup of the services so that communication could be improved.