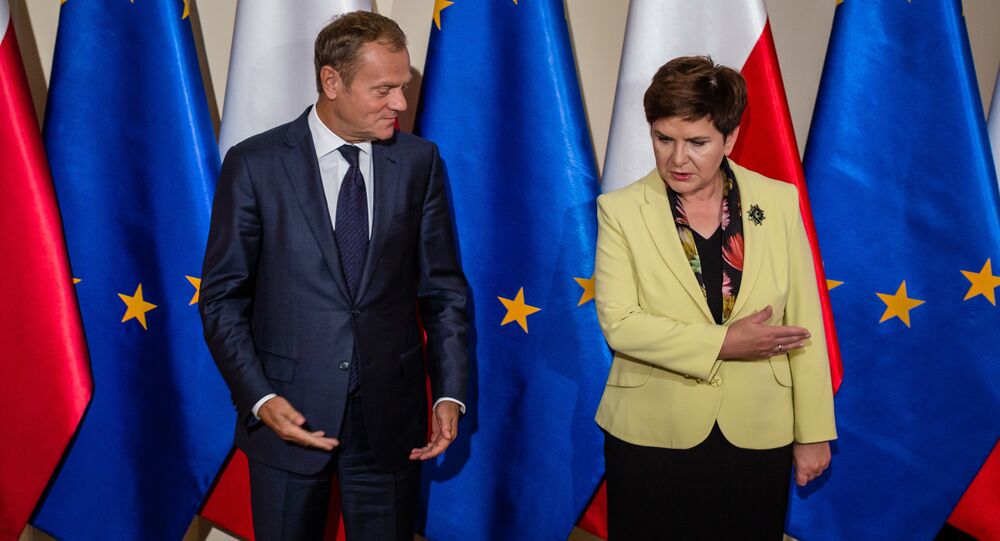 Poland has missed the October 31 deadline to amend controversial changes to its Constitutional Tribunal - demanded by the European Commission - and now faces becoming the first country to be hit with sanctions for breaching fundamental principles of membership of the EU.

© REUTERS / Kacper Pempel
Poland Turns Up the Heat on Brussels in Dispute Over Law, Economy
When Polish Prime Minister Beata Szydło and her Law and Justice party (PiS) took power following the election of October 2015, she immediately began a process of reforming the country's Constitutional Tribunal. The government appointed three judges to the court, ignoring those proposed by the previous administration.

Chief Justice Andrzej Rzeplinski, ruled that many sections of the law passed in December 2015 were "non-compliant with the Polish Constitution. However, the government in Warsaw said it would ignore the ruling, refusing to publish it, which meant — unpublished — the ruling did not stand.

On July 27, the European Commission gave Warsaw three months to "take appropriate action to address this systemic threat to the rule of law as a matter of urgency and asks the Polish government to inform the Commission, within three months, of the steps taken to that effect."

That deadline ran out on October 31 (nominally October 27) and Poland now faces what sanctions the EU thinks it can impose — at a time when the institutions of the EU are suffering from an increase in euroskepticism and lack of trust.

"The PiS government has clearly lost sight of reality, as it continues to deepen Poland's constitutional crisis. The Commission recommendations are clear and based on a thorough analysis. So are the different opinions of the Venice Commission," former Belgian Prime Minister and ALDE Group leader, Guy Verhofstadt said.

"It is scandalous that the Polish government has chosen to ignore them and pretend that the paralysis of the Constitutional Court is not a problem. Poland is in a constitutional limbo, with two parallel legal systems. This weakens the trust of Polish citizens in their own legal system and weakens the standing of Poland within the EU."

I stand with all Polish citizens who have never ceased to fight for freedom, democracy & #ruleOfLaw – values hijacked by their government.

​"I stand with all the Polish citizens who have never ceased to fight for freedom, democracy and the rule of law — values hijacked by their government.

"The EU must uphold the rule of law — all citizens, businesses and also Member States must abide by the same rules. As all steps of the rule of law procedure are now exhausted, the European Commission must be consistent and trigger the Article 7 Procedure," Verhofstadt said.