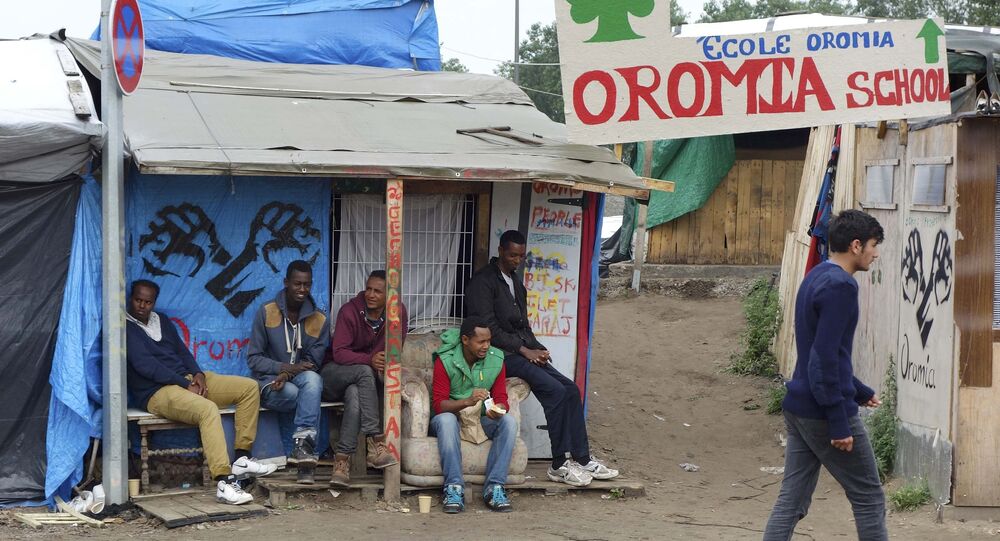 The failure to properly count the number of migrants who lived in the Calais camp prior to its dismantlement, as well as poor management of both French and UK authorities put vulnerable minors in danger, Laura Campbell, an activist with the British Calais Action charity group told Sputnik on Friday.

© REUTERS / Charles Platiau
New Migrants Continue to Arrive in Calais After Evacuation of Refugee Camp
MOSCOW (Sputnik) – On Wednesday, Calais authorities announced an end to the resettlement operation at the so-called Jungle, a shanty town built by migrants who had hoped to cross into Britain, but charities said the announcement was premature, given those still roaming around the site.

"The authorities have not fully taken into account exactly how many people lived in camp and so the process of moving people out and dismantling their homes at the same time in one week has caused danger to minors who have been left to sleep on the streets," Laura Campbell said.

She added that volunteers working in Calais had an accurate census on the number of refugees, but it was not taken into consideration by the authorities.

"The authorities wrote their own census, missing quite a number of minors before the evictions started, many were not approached and had no idea who the people were in camp," the charity representative said.

According to data by Help Refugees and L’Auberge des Migrants, on the eve of the Calais demolition that started on Monday, the number of migrants there reached 8,143, with 1,496 of them being mostly unaccompanied minors.

© Sputnik / Irina Kalashnikova
Authorities Evacuate Almost 5,600 Migrants From Calais Camp
"If the children had been moved first to a safe place, which was our hope and what we were lead to believe, before the evictions started they would not be left in this dangerous situation," Laura Campbell lamented, adding that the authorities hadn't shared with volunteers or refugees their plans to demolish the camp until the very last minute.

She added that the British side that pledged to take in about half of the unaccompanied minors also underestimated how many people would need accommodation.

"Unaccompanied minors could have started to be moved to the UK under the Dubs amendment from May. Unaccompanied minors with family in the UK have always had a legal right to reunification through the Dublin regulation," she stressed, referring to the landmark amendment named after Lord Alf Dubs, which was passed by the House of Commons in May, committing the British government to relocate vulnerable child refugees in France, Italy and Greece "as soon as possible."

Government officials in the region say that more than 6,000 people had been moved out of the squalid camp and transferred to towns throughout France, but according to Dave King from Jungle Canopy, who is in Calais protecting the children, around 100 minors have still been in Calais on Friday.

The United Kingdom, which started to take first child migrants less than two weeks ago, so far has admitted 274 unaccompanied minors from Calais, according to the latest data by the French Interior Ministry.