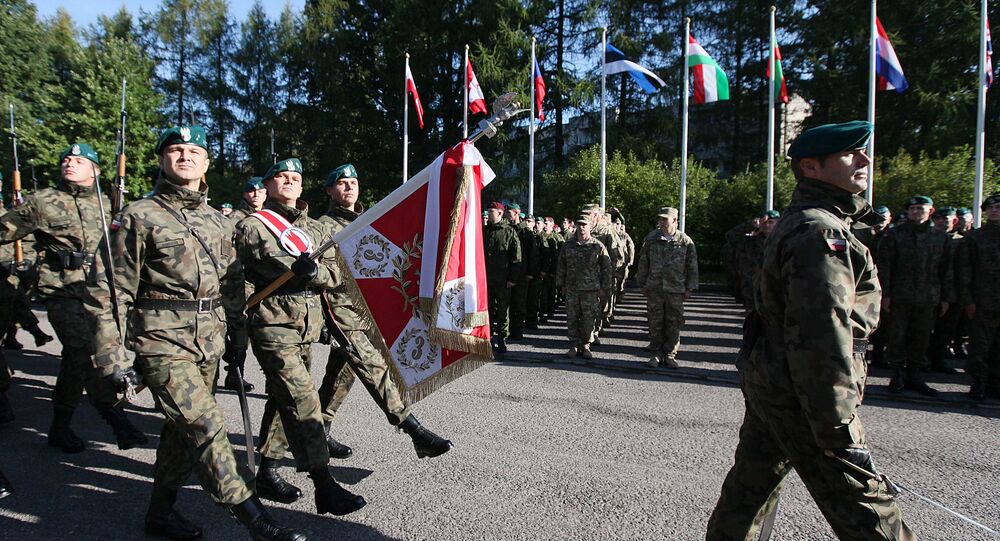 The Polish government has given a final go-ahead to the planned creation of a territorial defense force, which local media were quick to call the “personal army” of Defense Minister Antoni Macierewicz. Sputnik Poland discussed the issue with Polish politician and commentator Mariusz Olszewski.

“Macierewicz is a very efficient politician and defense minister and his ability to place [the territorial defense force] under his personal command, rather that the president’s is nothing short of a political masterpiece,” Mariusz Olszewski told Sputnik Poland.

© AP Photo / Alik Keplicz
Poland to Strengthen Defense Capability on Eastern Border in 2016
He added that the new force was obviously meant for use inside the country against the so-called “death squads” trying to destabilize the political situation in the country.

“If this is really what is happening, then the government’s fears are fully justified,” Olszewski chuckled.

In the event of an armed conflict the territorial defense units will be called up to secure their designated areas, stamp out attempts to stoke up ethnic and religious conflicts and attempts to destabilize the country.

When asked whether it means that the Territorial Defense Force (TDF) would serve as a kind of “personal police” for the ruling Law and Justice party, Mariusz Olszewski said that it would rather serve the national security minister.

“The very list of threats the TDF is supposed to deal with looks a bit strange though as we have no internal threats, neither have we any regional or ethnic minorities here,” Olszewski said, adding that the real threat to the powers-that-be came from people who “use Western money to destabilize the country through media ‘death squads’ and challenge the constitutional order in Poland.”

© Flickr / U.S. Missile Defense Agency
Poland Places Supply Order for 8 US Patriot Missile Defense Systems
“I am also worried by Ukrainian media saying that it could take the Polish army just five days to reach the border of the Second Polish Republic [prior to 1939 — Ed.]. This is exactly the kind of misinformation Western propaganda was spreading about Russian troops needing just 24 hours to reach Warsaw. Someone is trying to pit Eastern European countries against each other, to make people believe that war is imminent,” Mariusz Olszewski warned.

While admitting that security was something no country should ignore, he added that a country the size of Poland might need a territorial defense force, but only as a backup to the regular forces, “not as the mainstay of national defense as our defense ministry wants us to believe. This is either someone’s mistake or just a PR stunt.”

“Poland needs ground forces, an Air Force and, to a lesser extent, a Navy. As for territorial defense, it is just a smokescreen meant to hide what is really happening in our army,” Mariusz Olszewski emphasized.

The Territorial Defense Force (TDF) is a planned military reserve component of the Polish armed forces which is currently being formed.

Plans call for the force, once fully active, to consist of 35,000 part-time volunteers. Poland plans to deploy the new territorial defense units on its eastern border and to transfer the acting brigades there with an eye to becoming one of the largest NATO armies in Europe.

Defense Minister Antoni Macierewicz said  that the deployment was aimed against Russia, describing it as a "measured, proportionate" response to "the prospect of aggressive Russian action."

He also supports the idea of significantly boosting the Polish armed forces, from the current 80,000 servicemen to some 150,000.

Poland to Strengthen Defense Capability on Eastern Border in 2016