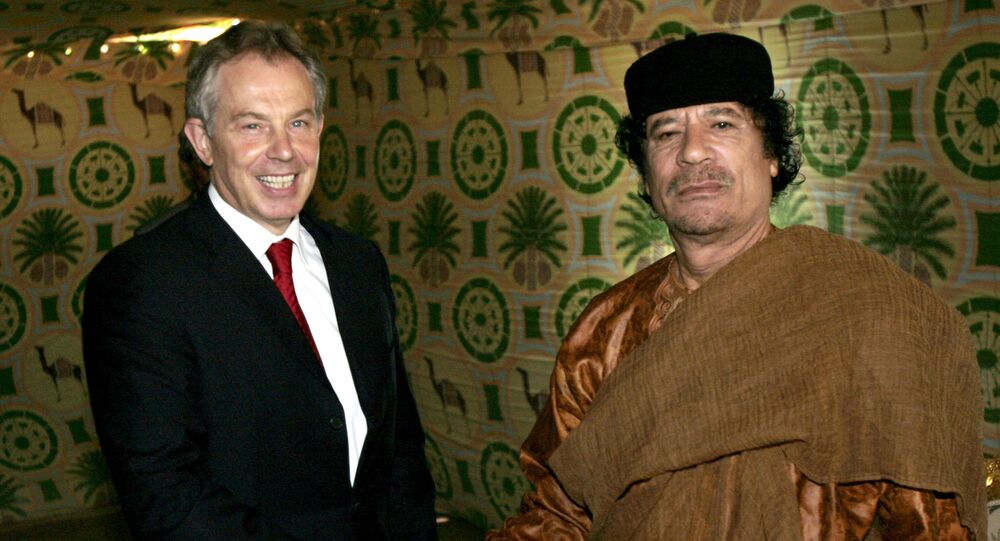 Former UK Prime Minister Tony Blair sidelined discussion over compensation for the victims of attacks of terror attacks by the IRA, using Semtex and weapons supplied by Libya, when brokering a controversial "new relationship" with Colonel Gaddafi in 2003, it has been revealed.

In evidence given to MPs in Westminster, former Foreign Secretary Jack Straw admitted that the supply by the Gaddafi regime of Semtex and other weapons to the IRA — which was using them to commit anti-British terrorist attacks throughout the 1980s and early 90s — and the question of compensation to the victims was not on the agenda when Blair met Gaddafi in 2004.

Jack Straw: It is not true to say that the issue of compensation was put aside for commercial interests pic.twitter.com/oyU5jz6y9o

© AP Photo / Alastair Grant
Blair to Gaddafi: I Just Called to Say... 'Find a Safe Place'
​Straw told the Northern Ireland Affairs Committee investigating why the victims of IRA attacks were not paid compensation by Libya, Wednesday (October 26), that — in negotiations between Blair and Gaddafi to bring Libya "in from the cold" in order to secure oil deals and intelligence cooperation — the matter of compensation for victims of IRA terrorism was not raised.

"We were all aware that, in the early 1980s and early 1990s, Libya was probably the most serious state sponsor of terrorism in the world and that included its culpability for […] the continuous supply of Semtex and other material to the IRA.

"The issue of compensation for the victims of terrorism was not raised with me. When you're involved in negotiations of this kind, which was to deal with a very serious and continuing danger that the Gaddafi regime had caused over many years, you've got to make a decision about what you're going to concentrate on," Straw said.

"If the issue of pyroterrorism had been raised, we would have taken that into account. It was not raised. The target there was to make Libya safe and to make the rest of the world safe from Libyan threats."

Why is Tony Blair reluctant to talk to the @CommonsNIAC — Sylvia Hermon asks Jack Straw pic.twitter.com/HVD3BQTLPL

In 1984, Yvonne Fletcher, a British police officer was fatally shot during a protest outside the Libyan embassy at St. James's Square, London, in 1984. It emerged that she was killed by a shot from within the embassy. Although no-one has ever been convicted for the murder, in 1999, the government of Muammar Gaddafi accepted responsibility for her death and agreed to pay compensation to her family.

© AP Photo / Martin Cleaver, File
A police officer walks by the nose of Pan Am flight 103 in a field near the town of Lockerbie

Four years later, in 1998, Pan Am flight 103 — a Boeing 747 flying from Frankfurt to Detroit — exploded in mid-air and crashed in Lockerbie, Scotland, killing all 239 people on board and 31 on the ground. After an investigation, two Libyan intelligence officers were accused of being behind the bombing and were eventually released by Libya and put on trial

On 3 May 2000, former Libyan intelligence officer Abdelbaset al-Megrahi was jailed for life after being found guilty of 270 counts of murder in connection with the bombing.

In May 2002, Libya accepted responsibility for the bombing and offered up to US$2.7 billion to settle claims by the families.

No Compensation for IRA Victims

In 2003 and 2004, Blair attempted reconciliation with Gaddafi, while brokering the Northern Ireland peace process and a warming-up of UK-Libyan relations with a view to securing oil deals — but — although Britain had negotiated compensation for Yvonne Fletcher's and the Lockerbie families — the question of compensation for the victims of IRA atrocities carried out using Libyan supplied weapons was not on the agenda.

"The Libyans had accepted — wholly — their responsibility for the Lockerbie bombing, as they had for the killing of WPC Fletcher. Although they had admitted they had supplied the Semtex, there was no parallel acceptance of culpability and still less an acceptance by them of the case for compensation for those victims," Straw told the MPs.