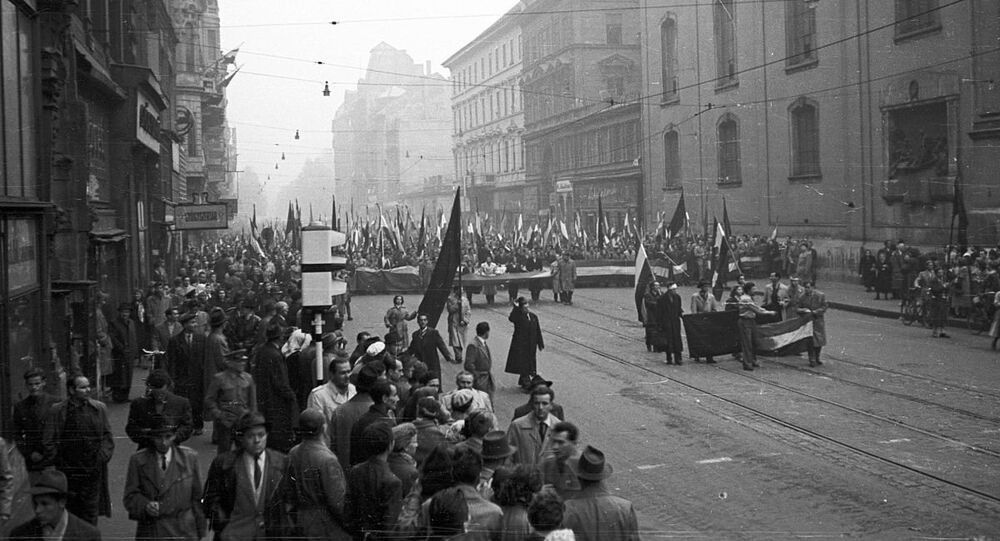 Russian ambassador and the Hungarian side exchanged opinions on the issue over he remarks made by Rossiya Segodnya International Information Agency’s Director General Dmitry Kiselev on the 1956 uprising in Budapest, and came to the conclusion that it was the matter of different historic interpretations, according to official statement.

MOSCOW (Sputnik) — Hungary lodged no protest to Russia over the remarks made by Rossiya Segodnya International Information Agency’s Director General Dmitry Kiselev on the 1956 uprising in Budapest, the Russian Embassy in Hungary said on Wednesday.

On Tuesday, the Hungarian Foreign Ministry summoned the Russian ambassador to the country after the opposition LMP party complained over Kiselev’s claims. He alleged in his TV program that the 1956 uprising against the USSR-influenced government could be considered a "color revolution" involving foreign special services.

"There were no [diplomatic] notes or protests. It was just a conversation in which the [Russian] ambassador presented our official position and, of course, drew attention to the fact that the media is free in Russia, and that journalists and historians working on this subject have their own opinion … on the issue," Embassy Spokeswoman Irina Zvonova told RIA Novosti.

© AP Photo / Dmitry Lovetsky
Russia Concerned by Desecration of Soviet War Memorial Graves in Hungary
She added that during the conversation, the ambassador and the Hungarian side exchanged opinions on the issue, and came to the conclusion that it was the matter of different historic interpretations.

In October-November 1956, Soviet tanks entered Budapest to suppress a nationwide revolt against the Communist regime in Hungary. Over 2,500 Hungarians were killed in clashes with police and Soviet troops, while thousands were wounded and some 200,000 fled the country.

The concept of "color revolutions" refers to a series of regime changes caused by anti-government protests in several republics, including the Rose Revolution in Georgia in 2003, the Orange Revolution in Ukraine in 2004 and a more violent Tulip Revolution in Kyrgyzstan in 2005.