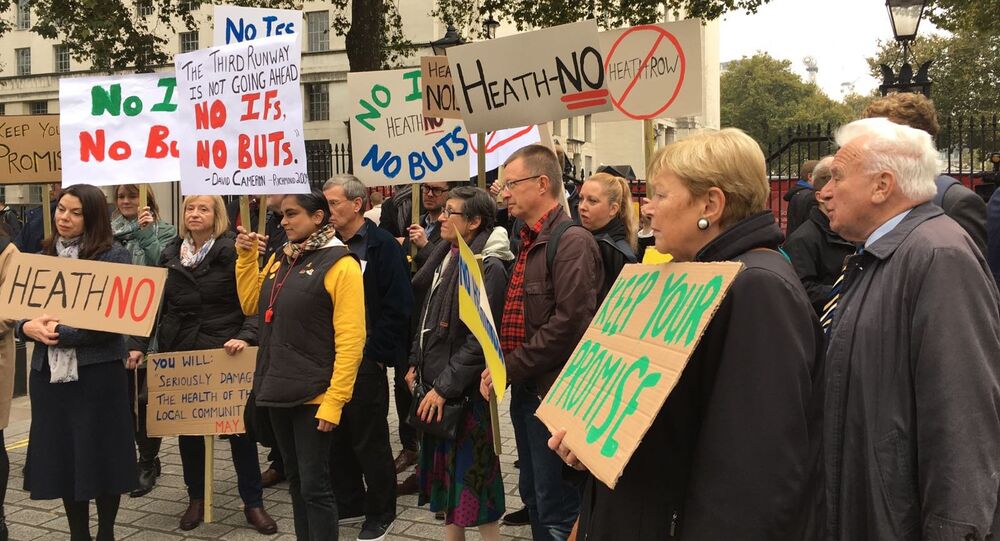 The UK government has made the long-awaited decision to expand London's Heathrow airport, a controversial move that is expected to result in widespread opposition from within Prime Minister Theresa May's cabinet and lead to the resignation of a government MP.

The decision to back the construction of a third runway at Heathrow represents a reversal from the government's position under former prime minister David Cameron, who famously that said he would block the west London airport's expansion, "no ifs, not buts."

The announcement also represents a personal U-turn from May as well, who in 2010 wrote a letter to her constituents saying: "Like many local residents, I strongly welcome the cancelation of the third runway at Heathrow."

A new #Heathrow runway — Chris Grayling tells MPs — is "in the national interest", "it's not just about the South East"

​However, Tuesday's decision falls in line with a recommendation from the UK Airports Commission, which favored an expansion of Heathrow rather than Gatwick airport in London's south.

"A new runway at Heathrow will improve connectivity in the UK itself and crucially boost our connections with the rest of the world, supporting exports, trade and job opportunities," said UK Transport Minister Chris Grayling.

From one of the now-deleted pages on Theresa May’s website: “Theresa is firmly against plans to build a third runway at Heathrow…" pic.twitter.com/EGc9hyuPe7

​"This isn't just a great deal for business, it's a great deal for passengers who will also benefit from access to more airlines, destinations and flights," Grayling added, referring to the UK's recent decision to vote to leave the EU.

"This is a really big decision for this country but it's also the clearest sign post the referendum that this country is very clearly open for business," he said.

​Under the proposal, a new runway and sixth terminal will be built at Heathrow at a cost of US$21.5 billion (£17.6bn), while the nearby village of Harmondsworth will be demolished.

Transport ministry officials say the project will provide the British economy with a US$75 billion (£61bn) boost, creating 77,000 jobs over the next 15 years.

Infighting and a By-Election

While the decision to expand Heathrow has been celebrated by government officials, the controversial announcement is also expected to generate significant internal opposition from within Theresa May's cabinet.

Foreign Secretary Boris Johnson has been among the most vocal critics of Heathrow expansion in recent years, saying last year that he would lie down in front of bulldozers and "stop the constriction of that third runway."

Queues of bulldozer drivers form outside #Heathrow in anticipation of Boris Johnson's pledge to lie down in front of one. pic.twitter.com/nvLTx4yRXk

​Johnson said on Tuesday, October 25, the project was "undeliverable" adding: "I think it's very likely it will be stopped."

Another cabinet minister expected to criticize the decision is Justine Greening, the education secretary, who has spoken out against the project in the past.

Following the Government's catastrophic Heathrow announcement, I will be meeting my constituents later today before making a statement.

​There is speculation that the anger over Theresa May's decision could also lead to a by-election, with Conservative party MP Zac Goldsmith, whose Richmond Park constituency borders Heathrow, expected to resign and run as an independent in the seat.

The political opposition was also matched with considerable community protests, with demonstrators gathering in different parts of London to condemn the government's decision.

Caroline Pidgeon, member of the London assembly for the Liberal-Democrat party told Sputnik the Heathrow expansion would create more health and environmental problems for Londoners.

"We already have to look at the issues that we face, not just around Heathrow, but right across London. From noise, from aircraft flying over [and] the air pollution — around Heathrow is an absolute hotspot for poor air," she said.

"We will continue every day, week, month and year, taking it to Richmond Park, where the Tory MP has promised that he will step down if the government make this decision. Bring it on — we will fight."

No10: Cab sub cttee decision on Heathrow was "unanimous". And when May informed full Cabinet "there wasn't a discussion". No Boris dissent.

​On the environmental front, Green groups have argued the expansion will increase carbon emissions, with suggestions that it could undermine the UK's commitments to reduce pollution levels.

There is also community condemnation over the decision, which will see the village of Harmondsworth demolished for the Heathrow expansion.

Gotta admire the chutzpah of a government that spins a third runway at Heathrow as good news for carbon emissions https://t.co/jAA7ADARkp pic.twitter.com/keT3w1vHOJ

​While the government has announced compensation and resettlement packages for those people affected, many say they aren't interested in financial aid and don't want to leave their village, where many have lived for decades.

The decision will now be taken to a parliamentary vote, expected sometime in 2017.