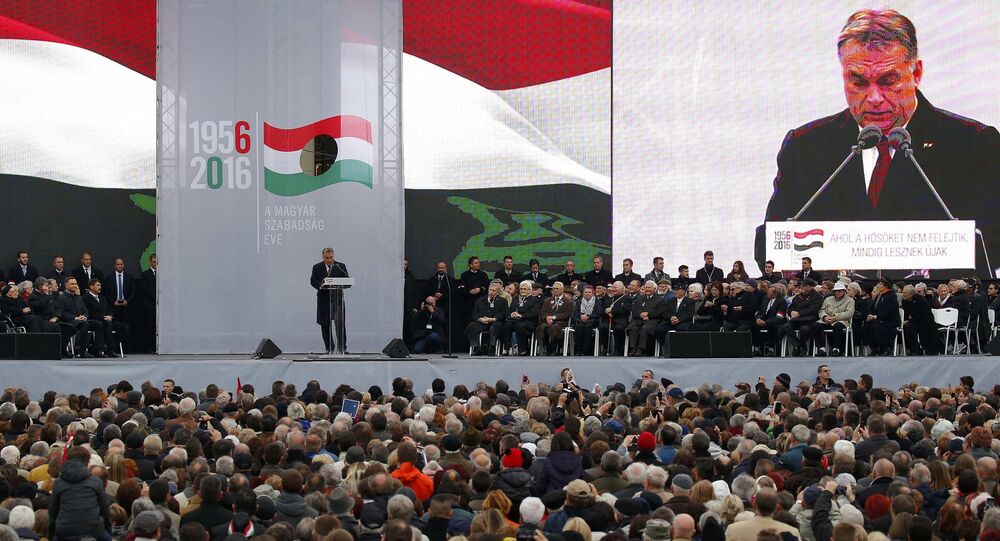 Hungarian Prime Minister Viktor Orban has taken aim once again at the EU, using the 60th anniversary of the 1956 Hungarian uprising to warn against the "Sovietization" of Europe and the need to protect national borders from migrants.

Orban likened the actions of the EU establishment to that of a foreign occupying force during his speech in Budapest, arguing that member states should be given greater powers over Brussels, particularly in regards to immigration.

"People who love their freedom must save Brussels from Sovietization, from people who want to tell us who we should live with in our countries," he said.

PM Orban: freedom-loving peoples of Europe must save Brussels from Sovietisation, the EU must not be turned into a "modern-age empire"

​"As heirs to 1956 we cannot allow Europe to cut the roots that made it great and helped us survive the Soviet suppression. There is no free Europe without nation states and thousands of years of wisdom from Christianity," he added.

"…we must close the border to stop the mass migration that flows from the south."

​The speech was greeted with a mixed response, with critics booing and jeering the prime minister, while others descended into brawls on the streets.

Despite the criticism, Polish President Andrzej Duda, who was a guest at the commemoration event, said Orban's stance on key issues was supported in Warsaw.

"You can count on Poland, we march together in the toughest moments," he said. "Two countries that were built on Christian foundations and are now free in the unified Europe."

Orban's continued criticism of the EU and strong rhetoric on the issue of migrants and immigration has highlighted deep divides within the EU over such matters.

While the European Commission and countries such as Germany favor the creation of a refugee relocation quota system among member states, a number of countries such as Hungary, Poland and Slovakia have vehemently rejected such proposals, arguing that national governments should maintain control over issues such as immigration.

​In defiance of Brussels, Hungary held a referendum earlier this month on the issue, and while not enough people voted to validate the referendum, 98 percent of those who took to the polls supported Orban's stance in rejecting refugee relocation quota systems.

Immigration issues aside, Hungary has also been critical of the level of control held in Brussels, calling for EU member states to maintain their own powers over key issues relating to the state.