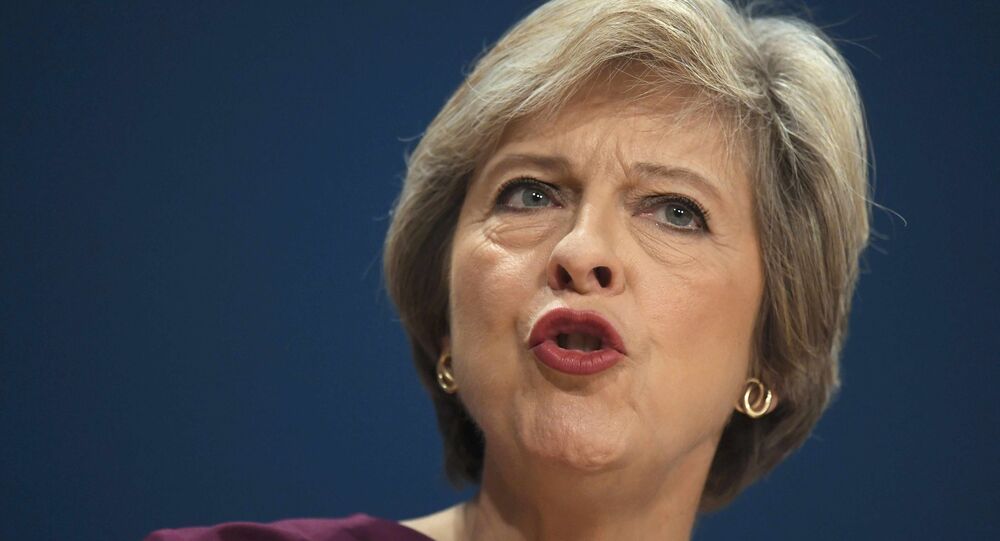 UK Prime Minister Theresa May is facing yet more stormy water as she begins the process of negotiating Britain's exit from the EU, chairing a meeting of the leaders of Scotland, Northern Ireland and Wales - each of whom has differing demands - to stave off a constitutional crisis.

© REUTERS / Eric Vidal
UK PM Theresa May Facing 'Stupid Brexit' or 'No Brexit' Options
Quite apart from the shock of the result of the referendum on Britain's membership of the EU on June 23, which delivered an "Out" verdict by 52 percent to 48 percent, the fallout has been made even more politically precarious, because, whilst the people of England and Wales voted to remain in the union, those in Scotland and Wales voted out.

Central to the issue is devolution: the powers that have been handed from London to Cardiff, Edinburgh and Belfast. All three enjoy powers in various areas of government and the fear is that — unless they work together for a common outcome — the Brexit negotiations will crash before they start.

Four-nation #Brexit: How the UK and devolved governments should work together on leaving the EU: https://t.co/eSMdFbhszs pic.twitter.com/uoy9tRWN0E

A new report from the think tank the Institute for Government (IfG) says if London tries to impose a Brexit deal on the devolved nations, there will be a "full-blown constitutional crisis." The report says: "Imposing a Brexit settlement in the absence of consent from the devolved bodies may be legally possible, given that the UK Parliament remains sovereign.

"However, this would run contrary to convention and to the spirit of devolution, which recognizes the right of the three devolved nations to determine their own form of government."

In its paper, the IfG, "outlines the steps that we believe are required, starting from today, to prevent political spats from escalating into a full-blown constitutional crisis."

May's biggest headache is Scotland, where its First Minister, Nicola Sturgeon, has said that — whatever happens — Scotland will remain a member of the single market and accept the free movement of EU workers. If that does not happen, she says, she will trigger another referendum on Scotland's membership of the United Kingdom — the last of which, 2014, resulted in 55 percent voting to remain part of the UK.

Sturgeon told the annual convention of the Institute of Directors in London: "After all, 48 percent of the electorate voted to remain in the EU. So did two of the four nations of the UK. And people who voted to leave were repeatedly told that leaving the EU did not necessarily require leaving the single market. So I don't believe there is a clear mandate for what is generally known as a hard Brexit. Single market membership seems to us to be the obvious consensus position that we should try to work towards."

A legal challenge is underway arguing that Northern Ireland has a veto over any change to its constitutional position following devolution and the peace agreement. Post-Brexit, the border will become Northern Ireland's only land frontier with the EU and that would envisage the rebuilding of what was once the most heavily fortified borders on Europe during the era of the Troubles in Northern Ireland.

Meanwhile, Welsh First Minister Carwyn Jones, has written to Mrs. May calling for a vote in all four of the UK's parliaments and assemblies on the UK's negotiating position. "Such an approach would properly reflect the stated position of the UK Government that the UK is a family of nations, a partnership of equals," he wrote.

Theresa May is set to establish a forum for Scotland, Wales and Northern Ireland to meet regularly with the UK Brexit secretary, David Davis for a "chance for them all to put forward their proposals on how to seize the opportunities presented by Brexit and deliver the democratic decision expressed by the people of the UK." Whether this is enough to satisfy the contrasting needs of the devolved nations is another question.

Almost Half of Brits Think Prime Minister Has No Brexit Plan