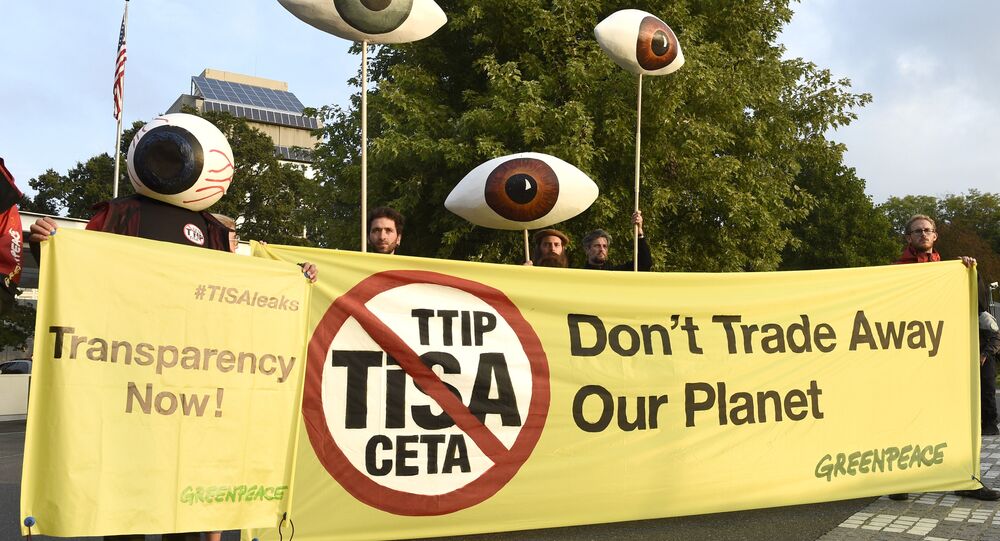 Trade agreements like the Trade in Services Agreement (TiSA) will not "just undermine fundamental rights, but also trust and vibrancy in the data economy," according to the statement of the European Digital Rights (EDRi) international advocacy group.

© Flickr / Mehr Demokratie
EU Asks TiSA Talks Partners to Liberalize Industries for Foreign Ownership - WikiLeaks
MOSCOW (Sputnik) — A total of 20 civil rights organizations sent a letter to the European leaders highlighting the negative impact of including clauses on processing and transfer of personal data in trade agreements like the Trade in Services Agreement (TiSA), the European Digital Rights (EDRi) international advocacy group said in a press-release, seen by Sputnik.

"In the letter, a broad coalition urges the European Commission and Member State representatives to resist pressure and come forward with proposals which will not sacrifice citizens’ fundamental rights," the statement reads.

The letter explains how the issues could be solved and encourages the EU leaders to adopt a positive, citizen-focused agenda, which will help rebuild trust in trade negotiations.

"EU leaders must protect individuals' personal information and privacy. The best way to do this is by not including data flows in trade agreements," Advocacy Manager of EDRi Maryant Fernandez Perez said in a statement, adding that "the European Union should defend its values and regain its leadership on this key issue."

EDRi stressed, citing an independent research, that "trade agreements will never work for citizens. They will not just undermine fundamental rights, but also trust and vibrancy in the data economy."

According to the press-release, EDRi and its members also sent another letter to EU Commission's president Jean-Claude Juncker to stress that "the EU should set a global example for a data protection-proof trade policy".

On Thursday, the WikiLeaks whistleblowing website published a new batch of secret documents regarding TiSA ahead of a new round of negotiations on the deal that started Monday in Geneva.

In May, WikiLeaks published the first batch of documents related to confidential 23-way talks on TiSA. The TiSA treaty is aimed at liberalizing the trade in services among the United States, the European Union and other countries accounting for nearly three-quarters of global services.

The trade in services pact has been under discussion since 2013. Over a dozen of rounds of talks have since been concluded, with no deadline for ending the negotiations in sight, according to the European Commission.