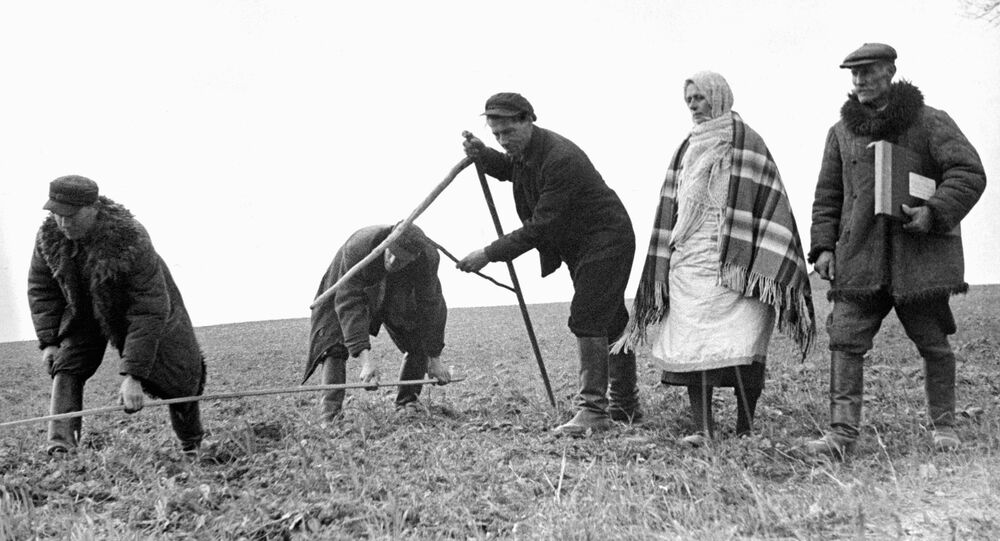 Late last week, Ukraine's parliament passed a declaration which officially condemned the Soviet Union for the outbreak of WWII, and rejected the post-war order which was established in 1945. In effect, lawmakers have unwittingly opened a Pandora's Box to Polish territorial revisionism.

Between 1919-1921, the newly independent Polish Republic and Communist Russia waged a war across Polish, Belarusian and Ukrainian territory; the war started after Warsaw saw its chance to regain its former imperial glory; Moscow, meanwhile hoped to export its communist revolution to Germany. The war ended in 1921 after the Battle of Warsaw, when the Bolshevik government sued for peace.

© Sputnik / Grigoriy Sisoev
Moscow Refuses to Cut Ties With Ukraine, Open to Developing Friendly Relations
After that, from 1921-1939, Warsaw administrated territories which are now part of western Ukraine and western Belarus, known in Poland as the Kresy. In 1939, after Nazi Germany and the Soviet Union signed the Molotov-Ribbentrop Pact, these lands were annexed by the USSR, and remained Soviet territory until the country's collapse in 1991.

Modern Poland has formally given up any territorial claims to the Kresy, although many Poles still live in the areas, and both government and private organizations across Poland have worked to support Polish communities in these territories. Today, only a small number of Polish nationalists have any hopes of reincorporating these 'lost lands' back into Poland. But last week, lawmakers in Kiev decided to bring that dream a little closer to reality.

On Thursday, MPs from the Verkhovna Rada, Ukraine's parliament, approved the 'Declaration of Remembrance and Solidarity' of the parliaments of Ukraine, Poland and Lithuania, which put the blame for the events of the Second World War squarely on the Soviet Union.

"We draw attention to the fact that the Molotov-Ribbentrop Pact of August 23, 1939, concluded between two totalitarian regimes – the communist Soviet Union and Nazi Germany, led to the beginning of the Second World War on September 1, caused by German aggression, which the Soviet Union joined on September 17," the document reads.

© AP Photo / MARTIAL TREZZINI
Polish WWII Film Pulled From Kiev Screens After Ukrainian Foreign Ministry Warning
The declaration also condemns the post-war European order established at Yalta in 1945, suggesting that the outcome of the war was the 'enslavement' of Central and Eastern Europe for nearly half a century.

But experts suggest that there are massive holes in the Rada's logic. Speaking to the news website Lenta.ru, Ukrainian political scientist Vladimir Kornilov pointed out that in 1939, Ukraine was a republic of the Soviet Union, and that in 1991, that republic became the legal successor of the USSR itself. During the Second World War, millions of Ukrainians served in the Soviet Army, and many Ukrainians filled top Communist Party and military leadership positions.

Accordingly, Kornilov sarcastically suggested that in light of these realities, the Ukrainian government "can sue themselves" for aggression and responsibility for the outbreak of WWII.

But even more seriously, some observers warned that the declaration effectively means that Kiev's claims to its own western territories have been made morally and legally illegitimate.

Yuriy Shukhevych, lawmaker and son of Ukrainian Insurgent Army leader and former SS officer Roman Shukhevych, warned that in voting to the bill, Ukrainian lawmakers had opened a Pandora's Box for Warsaw "to consider our western territories as Polish lands."

© AP Photo / Evgeniy Maloletka
Normandy Talks on Ukraine in Berlin Prove 'Minsk Process Still Alive'
"Laugh you clowns! Do you realize what you have voted for?" the lawmaker grumbled, commenting on the declaration a day after it passed. The declaration has since been approved by the Polish parliament, and is slated for approval by Lithuania's as well.

In theory, the lawmaker is correct. Western Ukrainian territories, including Bukovina, Transcarpathia and South Bessarabia, were annexed into Soviet Ukraine between 1939-1940 in the run-up to the Great Patriotic War. Accordingly, the declaration delegitimizes Kiev's claims on these territories.

Commenting on this "theater of the absurd" in an article for PolitRussia, contributor Svyatoslav Knyazev suggested that while he could at least comprehend Poland's motivations for the bill (including Warsaw's never-ending quarrel with Moscow) he simply could not wrap his head around what lawmakers in Kiev were thinking.

Warsaw, he recalled, has reasons to resent the Soviet annexation, and Poland's post-war occupation.

But Kiev, which gained vast amounts of territory from the territorial revisionism of 1939-1940 and 1945, has effectively delegitimized its own claims to its own western territories by signing on to the declaration.

"The declaration adopted by the Rada is not just a shameful act of political madness," Knyazev wrote. "It is a kind of 'voluntary surrender', which Warsaw can only enthusiastically embrace. Poland no longer has any need to prove the legitimacy of a claim to the city of Lvov; Ukrainian authorities themselves have effectively recognized it."