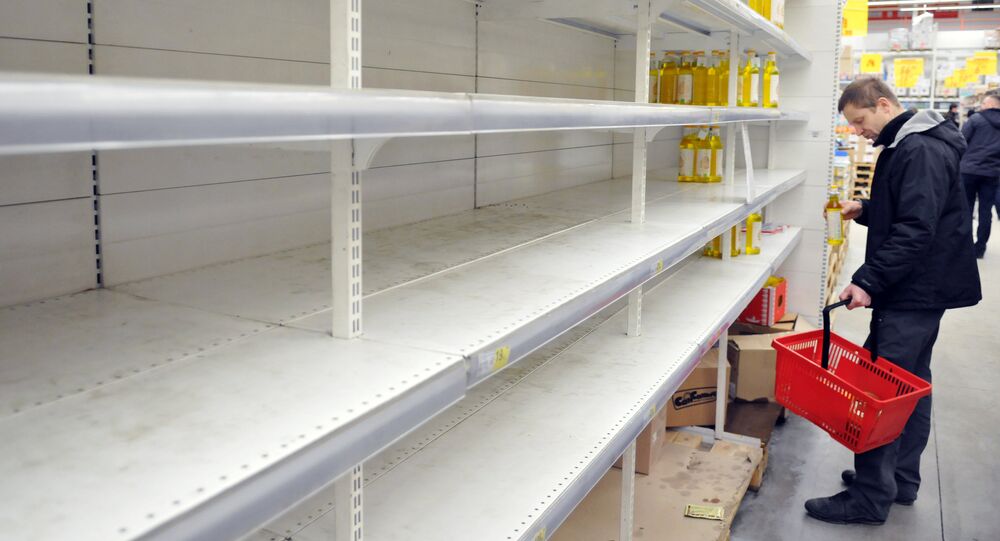 With the economic crisis in Ukraine showing no sign of abating, more and more people there are opting to buy expired food products, according to the Ukrainian news website Vesti.

On October 1, Ukraine's Cabinet of Ministers abolished the state regulation of prices for food products, in a temporary move which the authorities claim to be an experiment allegedly aimed at helping them find out more about the price controls' effectiveness and feasibility.

The government decided to scrap the maximum trade mark-up, which ranged between 10 and 15 percent, for goods that are deemed to be socially important goods. The measure will remain in force until December 31.

It means that until the end of the year, entrepreneurs are free to hike the prices of staple goods including bread, milk, butter, eggs, sugar, pasta and many other products.

In an effort to save money, Ukrainians have rushed to buy expired food, including milk, sausage, cheese and croissants, enticed by smooth operators using the Internet, according to the Russian news website Lenta.ru.

"I'm selling expired sausages, frankfurters and wieners. Pay attention to the fact that the products are not spoiled," Lenta.ru quoted an unnamed seller from the Ukrainian town of Kremenchug as saying.

Needless to say, prices for such foodstuffs are much cheaper than they are for fresh products, with businessmen preferring to sell expired food at urban markets and even spontaneously formed selling points.

© AFP 2021 / GENYA SAVILOV
Malice or Folly? Kiev Authorities Finishing Off Last Remnants of Ukraine's Economy
Lenta.ru also cited the head of Ukraine's Union of Consumers Maxim Nesmiyanov as saying that milk products and ketchup are a dime a dozen at the marketplaces, where there are mostly purchased by pensioners.

Meanwhile, food prices in Ukraine have increased by about 10 percent since the beginning of this year, while the population's purchasing power has tumbled 20 percent within the same period, according to statistics.