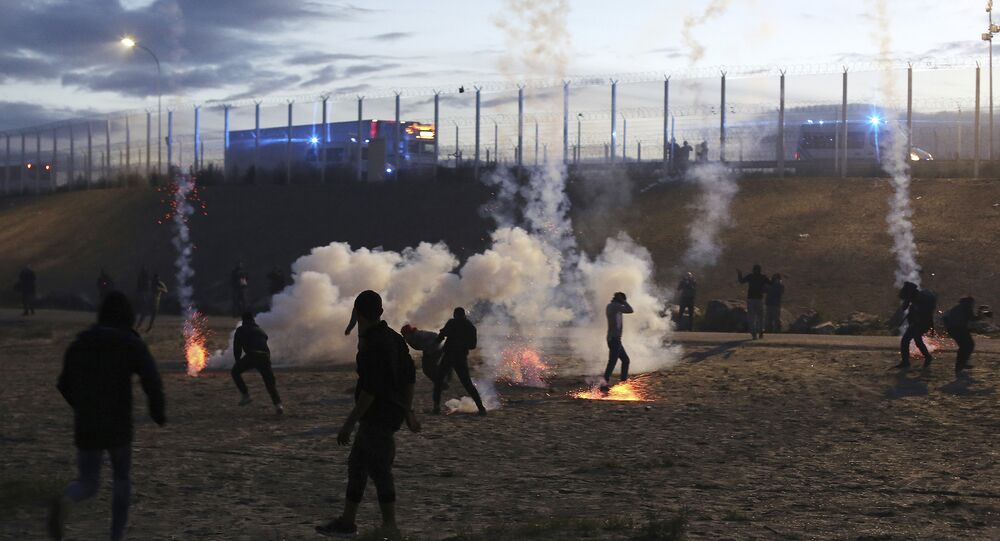 The demolition of the "Jungle" migrant camp in the French port of Calais, which is scheduled for Monday, has raised serious concerns among human rights activists: migrant expert Francois Guennoc told Radio Sputnik that the resettlement of such a huge camp on such short notice is simply impossible under "decent human conditions."

On Monday, France is set to begin dismantling the infamous migrant camp in the northern port of Calais. Bulldozers will completely demolish the shanty-town dubbed the "Jungle" by the end of October following the partial dismantling in February.

Meanwhile the camp has become a symbol of Europe's apparent failure to deal with its refugee crisis, and is the focal point of criticism from human rights activists and nongovernmental organizations.

The first buses will be sent to the "Jungle" on Monday morning to relocate the migrants to reception centers across France.

French authorities say that between 5,000 to 8,000 asylum seekers are camped at the site. They will be taken to welcome and arrival orientation centers (Centre d’Accueil et d’Orientation, CAO) and centers for political asylum seekers (Centre d'accueil de demandeurs d'asile, CADA) across France.

Migrant expert Francois Guennoc from "Auberge des Migrants", an association in Calais that helps refugees, told Radio Sputnik that for most of the refugees who hope to get to the UK, the process is one characterized by "stress and complete misunderstanding."

The expert also said that those who decide to leave the camp voluntarily are running the risk of being arrested and ending up in detainment centers for foreigners.

The decision to dismantle the "Jungle" has become an "apple of discord" between the government and nongovernmental organizations.

© REUTERS / Pascal Rossignol
Aerial view of a makeshift camp as containers (rear) are put into place to house migrants living in what is known as the "Jungle", a sprawling camp in Calais, France, August 14, 2016.

The language the French government used to describe the "humanitarian operation", "customized solution on defense" and "ways to obtain asylum" did not convince the charities who think that the resettlement of such a huge camp on such short notice is simply impossible under "decent human conditions,"Guennoc said.

He also noted that it is very hard to count up the exact number of people camping in the "Jungle". According to the latest estimates of "Auberge des Migrants" which has divided the camp into sectors, there are 8,100 people. Therefore, the expert doubts that the figure voiced by the Prefecture is accurate.

© AP Photo / Pascal Rossignol
A French policeman posts the official document that announces the dismantling of the makeshift camp called the "Jungle", as a migrant walks past in Calais, France, October 21, 2016

"The authorities have made what they called a "visual" count up. The police have gone through the camp counting up the people whom they saw on the way. It amounted to 5,600 people. However you understand that it is not serious. The figure voiced by the Prefecture is purely political aimed at demonstrating that there is enough space in CAO to accommodate everyone," he told Sputnik.

The associations are also concerned about unaccompanied minors. According to the estimates of the «France Terre d'asile» association made in October, there are around 1, 300 migrant youngsters unaccompanied by adult family members who have fled war zones such as Afghanistan, Syria and Sudan.

Under the family reunification program, these  youngsters have the right to leave for the UK, however the expert says that neither the government nor associations "have any idea what to do with those unaccompanied minors who have no families in the UK."

© AP Photo / Emilio Morenatti
Masked Refugees Clash With Police in Calais Camp
The demolition of the "Jungle" is an unprecedented operation. The Belgians are also getting ready for it: 120 policemen will be deployed along the border to prevent the set-up of camps in Belgium.

Meanwhile French aid volunteers have warned that the demolition could lead to unofficial migrant camps growing elsewhere in northern France.

The opinion of mayors of French municipalities has split: while some officials welcome the influx of migrants, others are deeply against. For example, under the pressure of the Prefect, the Mayor of Saint-Bauzille-de-Putois commune has resigned several days before the arrival of 87 migrants from Calais.

Ahead of the demolition, clashes with police have occurred at the Calais. Migrants in masks threw rocks and gas canisters, while police used tear gas to suppress the night riot in the camp,

According the French media, the clashes are supposed to be headed by the left-wing UK protesters, dissatisfied with the government decision to accept children refugees.