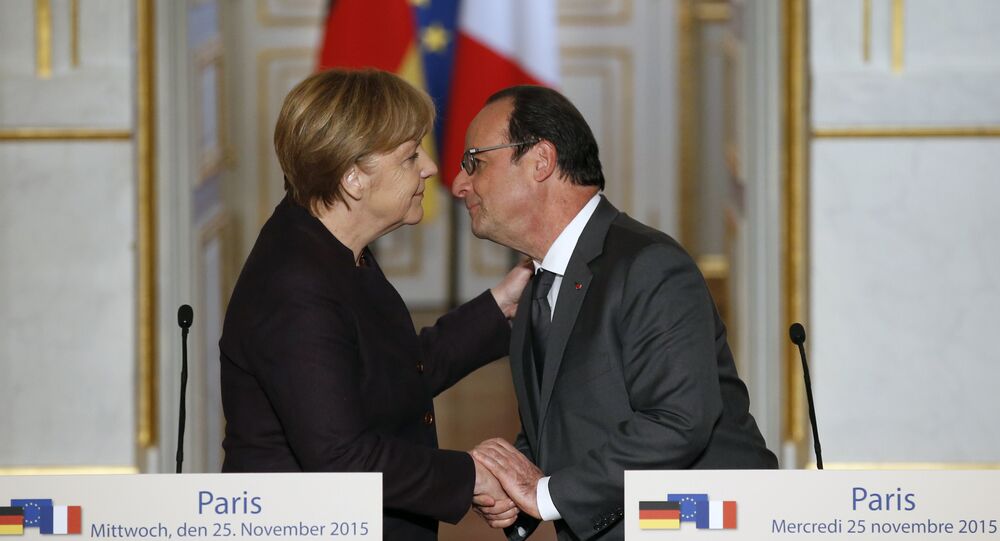 The leaders discussed resolving the conflict in Ukraine.

Merkel said that it is necessary to hold Normandy Four meeting on Ukraine on a Regular basis. She also reported that the group agreed on roadmap on Donbass, noting that the meeting in Berlin did not yield huge results, though.

"It is necessary to hold such meetings on a regular basis to continue work on this process. These are big goals that we have set," Merkel said at a press conference in Berlin.

According to the chancellor, France and Germany intend to follow up on this process as the Minsk agreements "are the basis that we have, the only agreement which will help us overcome the situation when the truce is constantly violated."

"We discussed the working process on security issues, political changes that should be worked on, and — and this is real progress of today — we discussed the process of creating a road map," Merkel said.

© Sputnik / Michael Klimentyev
Russian, French, German Leaders Finish Talks on Syria in Berlin
Angela Merkel also pointed out that an armed OSCE mission in Ukraine is not an urgent issue at the moment.

"We talked about OSCE monitors getting access to all areas all through to the border, the Russian president pointed to it, and in some cases getting access is difficult. Besides, as was said before, if there is an election process, if there are election rules, then we can also talk about an OSCE mission, including armed missions. But at the moment it is not an urgent issue," Merkel said at a press conference after meeting Russian, French and Ukrainian leaders.