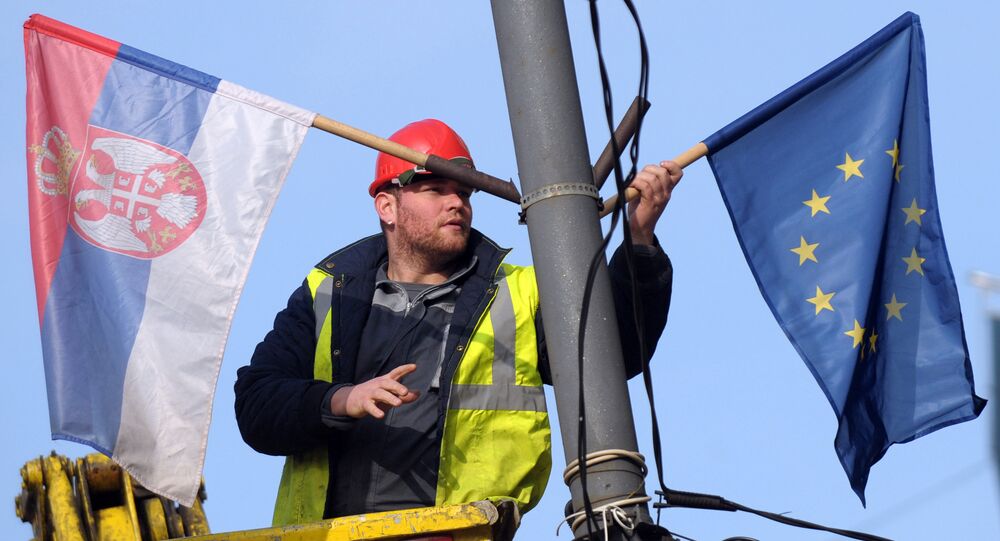 Russia respects Serbia's desire to join the EU, but believes that Belgrade should find a way to minimize the negative consequences this could have on its cooperation with Moscow, Russia ambassador in to Serbia, Alexander Chepurin, said during an economic forum in Belgrade.

Russia is one of Serbia’s main trading partners in the world with the bilateral trade turnover in 2015 standing at a hefty $1.5 billion and Russian investments of the past few years exceeding $3 billion.

© AP Photo / Darko Vojinovic
How EU is Pressuring Serbia to Abandon Relationship With Russia
Moreover, thanks to the free trade regime existing between the two countries, 99 percent of Serbian exports to Russia come here customs free.

Despite the current economic crisis, Serbian exports to Russia  have gone up 9.5 percent since January, and a similar free trade deal with the Eurasian Economic Union would increase the number of potential buyers of Serbian goods to 200 million.

However, Serbia’s entry into the EU would render this free trade agreement null and void simply because no such arrangement currently exists in the EU.

He added that the energy cooperation between Russia and Serbia would also suffer now that EU pressure helped “bury’ the South Stream project, which would have earned Belgrade more money from gas transit than what it has been offered by Brussels.

The Russian ambassador’s proposal left the participants of the Belgrade summit divided with Serbia’s former envoy to the US, Ivan Vujacic, warning that for all its good intentions, this “mechanism” would complicate Belgrade’s already difficult integrations talks with Brussels, especially in view of the tense relations now existing between the EU and Russia.

Former Spanish Foreign Minister Miguel Angel Moratinos said, for his part, that Alexander Chepurin’s proposal; made a lot of sense.

“If you have shared interests, the best thing you should do is to discuss things. I believe that that the negotiations between Serbia and the EU are a two-way road. Serbia has good relations with Russia and any dialogue on this issue would benefit us all,” he emphasized.

How EU is Pressuring Serbia to Abandon Relationship With Russia