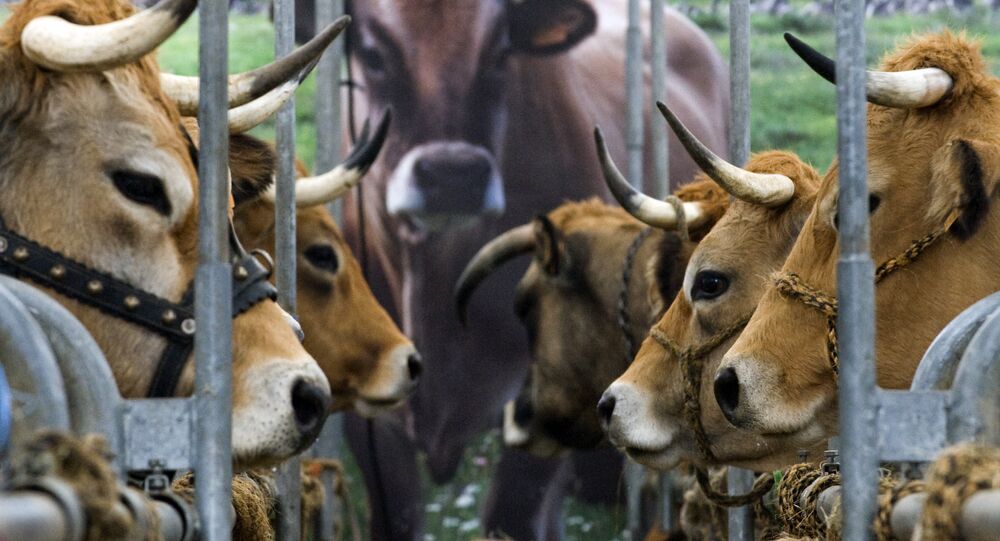 A proposal by the agricultural ministers of France, Germany and Poland to send the EU's excess beef to feed refugees in the Middle East is not enough to save French farmers from the EU's harmful policies, cattle farmer Michel Manoury told Sputnik Francais.

Following a trilateral summit in Weimar, France's Stephane Le Foll, Germany's Christian Schmidt and Poland's Krzysztof Jurgiel issued a press release calling on the European Council of Agriculture Ministers to establish a humanitarian aid program "in kind" for countries with a lot of refugees, such as Turkey, Lebanon and Jordan.

Since European farmers are facing a beef surplus, they propose that the meat is redistributed to feed refugees in these countries, which would also provide income for struggling cattle farmers.

Michel Manoury, a cattle farmer in France's Orne region and local chairman of the French Meat and Livestock Association INTERBEV, told Sputnik Francais that the measure is too little too late for impoverished French farmers.

"Things are really bad. We haven't been making money for five years, and nobody is interested (in our problems). The measures proposed for the meat industry by Mr Le Foll are derisory! It's as though we don't exist any more," Manoury said.

France has the largest agricultural area in the EU, and French farmers account for 34.4 percent of EU's bovine herds,followed by Spain (15.2 percent) and the UK (12.8 percent).

France is a net contributor to the EU's Common Agricultural Policy (CAP), a system of agricultural subsidies and other programs aimed at enabling European farmers to produce enough safe food at the right price to feed over 500 million Europeans.

The CAP is one of the EU's most expensive policies, accounting for  39 percent of the EU budget in 2014. In 2009 for example, the CAP allocated 59.8 billion euros in subisidies. Of that figure, 10.3 billion euros was paid to French farmers and other agricultural businesses.

© Sputnik / Filip Klimaszewski
How Do You Like Them Apples? Polish Farmers Grow Weary of Anti-Russian Sanctions
Part of the EU's reforms to the CAP carried out in June 2013 including linking 30 percent of the subsidies paid directly to farmers to "compliance with efficient agricultural practices." The reform also sought to reduce the gap in levels of support between EU member countries, regions and farmers over the following seven years.

According to Manoury, French livestock farmers have been badly affected by recent reforms to the CAP.

"They have absolutely destroyed us meat producers  … they have taken away a whole series of subsidies which allowed us to sustain the price of meat, and nothing has been proposed to replace them so that we can cope with it. Furthermore, the price of meat for stores and slaughterhouses increased, because purchasing power in France fell," Manoury said.

© Sputnik / Yuriy Lashov
French Suppliers Help Crimean Oyster Farm Become Pearl of Black Sea
"Nothing has been done, apart from a small series of measures which do not solve the problems facing the sector – we need customers! At the European level and also globally. But we can't get through. Why? Perhaps because of policies which are not always good," Manoury said.

"We sacrificed our agricultural producers, pork and meat producers were hit… as soon as they introduced the boycott we knew very well that agriculture will pay the biggest price," the farmer complained.

The Land of Milk Needs Money: EU Dairy Farmers in Disarray Over Glut