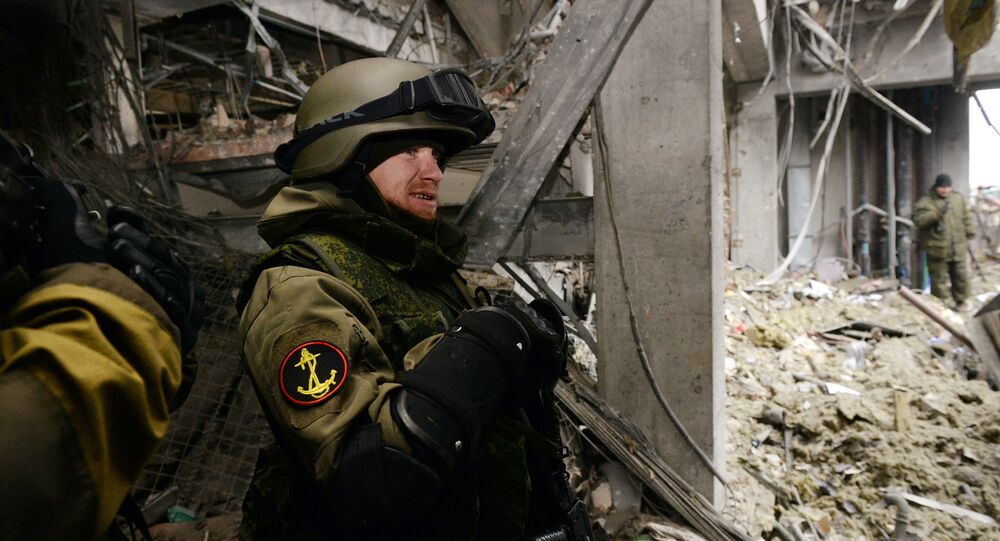 On Sunday night, Donetsk People's Republic militia commander Arseny Pavlov, aka Motorola, was killed in an explosion of an elevator in a Donetsk high-rise. DPR leader Alexander Zakharchenko called the attack a declaration of war by Kiev. Analysts warn that the brazen attack could lead to a resumption of hostilities.

According to local media, Pavlov, the commander of the Sparta Battalion special forces unit, was killed after a remotely-detonated improvised explosive device blew up in an elevator shaft in the apartment building where he and his family lived. DPR authorities suspect Ukrainian saboteurs to be behind the attack.

© AFP 2021 / DIMITAR DILKOFF
DPR Leader Slams Ukrainian President for Revoking Minsk Agreements
Pavlov was threatened directly by President Petro Poroshenko just last month. In early September, in a ceremony dedicated to Ukrainian servicemen killed in eastern Ukraine, including Igor Branovitsky, who died in 2014 amid brutal fighting for Donetsk Airport, Poroshenko claimed that Pavlov had murdered the soldier in cold blood in captivity, and vowed that the DPR commander would "answer for the death of a Ukrainian hero."

There have been multiple attempts on Pavlov's life over the course of the two-and-a-half year civil war in eastern Ukraine, which began in April 2014 after Kiev moved troops to the regions of Donetsk and Lugansk to put down uprisings against new authorities in Kiev. The commander had survived two assassination attempts in just the last five months, and was twice wounded in fighting with Ukrainian forces in battles in 2014 and 2015. In other words, Pavlov had a price on his head long before Poroshenko decided to try to implicate him in the deaths of Ukrainian POWs.

Pavlov was born in 1983 in Ukhta, northern Russia. He served two tours in the Russian anti-terrorist operation in Chechnya, where he got his nickname 'Motorola' for his work as a signals operator. Before arriving in Ukraine, he lived in neighboring Rostov-on-Don. In 2014, observing the coup d'état in Kiev, and hearing the threats made by nationalists against Ukraine's Russian minority, Pavlov came to eastern Ukraine, eventually joining the self-proclaimed Donetsk republic's militia. He and his unit were given numerous medals for the defense of DPR territory against Ukrainian forces. Pavlov held the title 'Hero of the DPR'.

#Motorola has joined the 10,000+ #Donbass people now killed by the #Kiev putsch regime. His legacy, a free #Donetsk and #Lugansk, lives on. pic.twitter.com/Tv5d3JvS0G

© Sputnik / Igor Maslov
Killing of DPR’s Military Leader by Ukrainian Forces Violation of Truce, Declaration of War – DPR
Given the deterioration of the security situation in eastern Ukraine in recent months, with recriminations on both sides about non-compliance with the Minsk agreements, experts are concerned that Pavlov's murder could result in a full-scale resumption in hostilities.

On Sunday night, shortly after finding out about the commander's death, DPR leader Alexander Zakharchenko stated bluntly that as he understood it, "Petro Poroshenko violated the ceasefire and declared war on us."

"The killing of charismatic leaders before the start of hostilities is a familiar story," the journalist lamented. "Fighting near Mariupol and the recent bombardment of the suburbs of Donetsk…in spite of the ceasefire, are more than enough proof that something big is being planned."

In any case, Kurtikov suggested that in light of Kiev's blunt refusal to abide by the provisions laid out in the Minsk accords, few hopes remain of a real and lasting peace emerging. In fact, "things can become a lot worse, and this is already happening."

© REUTERS / Mikhail Palinchak/Ukrainian Presidential Press Service
Kiev’s Claim on Security Problems in Donbass Excuse Not to Fulfill Minsk Deal
On Saturday, Poroshenko told servicemen in Kharkiv that Kiev would not move forward with the peace process until it retakes control over the border between the Donbass and Russia. Russian President Vladimir Putin slammed the Ukrainian leader's position, calling Kiev's hesitation little more than "a pretext not to fulfill the political part [of the Minsk deal]," which includes decentralization and special status for the Donbass.

Oleg Tsarev, parliamentary speaker of the Unity Parliament of the self-proclaimed Federation of the Donetsk and Lugansk, speculated that Pavlov was purposely killed, because "Ukrainian army attacks and terror always happens on the eve of international meetings which might influence the situation in Ukraine."

Commenting on the commander's death, Svobodnaya Pressa contributor Anna Golgareva, reporting from on the ground in Donetsk, noted that the security situation has already suffered a serious deterioration in recent days. This weekend alone, DPR reconnaissance spotted heavy military equipment being brought into Lugansk Village, and detained an unidentified man for illegally attempting to enter DPR territory. Northern and western areas of the city of Donetsk, the airport, and the villages of Yasinovataya, Gorlovka and Zaitsev were subjected to shelling by over 500 rounds of artillery and other weapons fire; one DPR serviceman was killed.

© Flickr / U.S. Army Europe
Donbass Militia Spots Mercenaries From US, Canada, Baltics, Poland in East Ukraine
In the neighboring Lugansk People's Republic, Militia Chief of Staff Oleg Anaschenko reported Sunday that LPR intelligence had spotted several hundred mercenaries from countries including the US, Canada, the Baltics and Poland arriving near the contact line.

Ultimately, it will become clear soon enough whether Kiev's provocation is part of any coordinated effort to resume the fighting in eastern Ukraine, and what its purpose might be. Experts say there is little hope of Ukraine's demoralized military achieving a crushing defeat over Donbass militia, even with NATO training and the help of mercenaries. Accordingly, some DPR and LPR officials believe that Kiev's efforts to destabilize the situation are part of an effort to distract from mounting domestic problems, including a collapsing economy and growing social tensions.