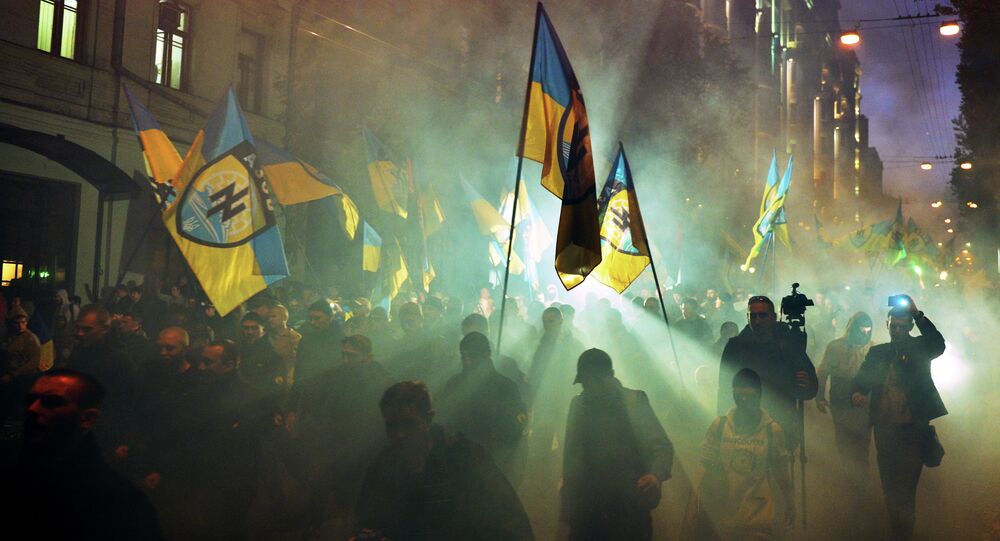 Last week, representatives of Kresowian, a movement committed to preserving the legacy of Poland's former eastern territories, sent a letter to the Foreign Ministry, urging it to change its Ukraine policy. The group is one among many in Poland who are sick and tired of Ukrainian officials' support for radical nationalist, crypto-fascist ideologies.

Speaking to Sputnik Polska, Andrzej Zapalowski, a former MEP and the president of the Polish Geopolitical Society, explained the sources of the growing weariness toward Kiev in Poland, but emphasized that it has nothing to do with ordinary Ukrainians.

Earlier this week, Union of Ukrainians of Poland president Piotr Tyma told Polish media that the situation for Ukrainians in Poland has deteriorated to the point of being 'on the verge of pogroms'.

© Photo : YouTube/Historia
Kiev Furious Over Polish Film Documenting WWII Ukrainian Nationalists' Crimes
"Poland is home to nearly a million Ukrainians, who work here because Poland has better conditions for business than Ukrainians face at home. But they feel that they are oppressed, even though Ukrainians are the motor of the Polish economy," Tyma said.

Asked to comment, Zapalowski suggested that Tyma's remarks amount to little more than a form of political 'blackmail.' "He constantly repeats that Ukrainians in Poland are oppressed, persecuted, but nothing of the sort is anywhere in sight. If this were the case, surely they would have gone to look for work in other countries," the expert stressed.

But Tyma isn't alone. Earlier, Ukrainian Ambassador to Poland Andrii Deshchytsia went so far as to claim that "Russian intelligence" was to blame for rising Polish hostility toward Ukrainians. "After all, the Kremlin's agents are working very actively in Poland, provoking confrontation with Ukraine. And who wins? A third party," Deshchytsia said.

Zapalowski stressed that Deshchytsia's allegations were "absurd," and explained that the real source of Polish anger toward Ukraine lies in Kiev's politics, not ordinary Ukrainians. In fact, the political scientist noted, the ideology of radical nationalism that Kiev adapted since the 2014 coup has helped to destabilize not just Ukraine, but all the countries bordering Ukraine as well.

"This is the case because the ideology of nationalism is morbid – it is anti-democratic, it is aimed at confrontation with everyone," the expert emphasized.

"Everything must be done to make it so that the ideology of Banderism does not infect others," Zapalowski added, referring to Kiev's rehabilitation of WWII-era Nazi collaborator Stepan Bandera, who present day Ukrainian authorities have lionized as a hero and 'fighter for Ukraine's independence'.

"So long as Banderism exists, so too will the risk of destabilization of not just of Ukraine, but of Eastern Europe as a whole," the expert stressed. "The catalyst of this infection is dangerous in and of itself."

© Sputnik / Stringer
Still Do Not See Any Nazi? Ukrainian Ultranationalists Stage Massive March in Kiev
On Friday, Kiev marked Ukrainian Insurgent Army (UPA) Day, dedicated to the 74th anniversary of the founding of the collaborationist movement founded by Bandera. During the Second World War, UPA systematically murdered between 80,000 and 120,000 Poles, predominantly women and children, in Nazi-occupied Polish territories which were later incorporated into western Ukraine. Asked to comment on the Polish reaction to this holiday, Zapalowski suggested that more than anything, it is an insult to Ukrainians themselves.

"This day wasn't chosen by accident, but for the purpose of confrontation with others. Let us remember: during the Second World War, about 1.5 million Ukrainians fought [and died] in the war against the Nazis. In the ranks of the UPA and German formations there were about 200,000 fighters, mostly from western Ukraine." A total of nearly six million Ukrainians served in the Red Army through the war.

In other words, Zapalowski noted, today in Ukraine, a minority is imposing its views on the majority, "in order to create a confrontation inside Ukraine itself…In general, countries celebrate those dates that unite as many citizens as possible. But in Ukraine, a completely different situation exists – where there is a holiday for Banderites, while for most of Ukrainian society it is a day of humiliation."

© Sputnik / Pavel Palamarchuk
Nationalism Disguised as Patriotism: Stepan Bandera's Legacy Looms Over Poland
In fact, the political science explained, nationalist forces have imposed their will on the rest of the country. These forces are also supported by certain politicians in Western countries, who are interested in fomenting a confrontation with Russia, which like Poland shows no tolerance for WWII-era Nazi collaborators.

"This is another form of propaganda war against Russia, and not just against Russia. It's also an element of confrontation with Ukraine's neighbors. It seems as if someone wants to see Ukraine permanently destabilized," Zapalowski noted.

Ultimately, the expert stressed that "Poland's current policy toward Ukraine is absolutely incorrect." So long as Kiev adheres to a policy of promoting radical nationalism, including the sort that resulted in the deaths of over a hundred thousand Polish civilians in the past, there will be little historical common ground for the two countries to build on.