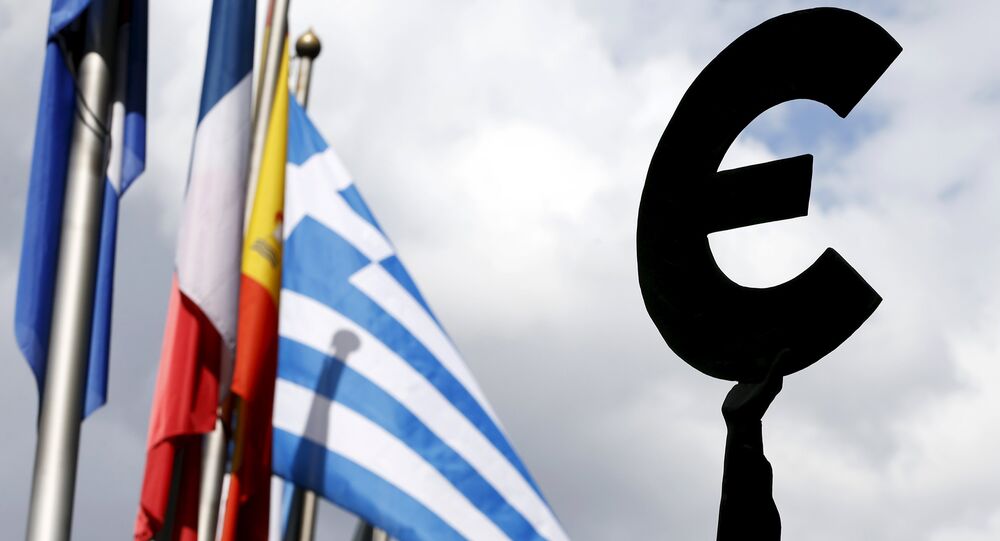 IMF deputy head David Lipton told Germany's Suddeutsche Zeitung that the fund won't accept deadlines from the German government about Greek debt, and reiterated calls for Berlin to spend more to help the Eurozone out of crisis.

© Sputnik / Sergei Guneev
Greece Accused of 'Double Dealing' Over Bailout Terms Amid Bankruptcy Fears
Germany's Finance Minister Wolfgang Schauble is insistent that the International Monetary Fund will take part in the third bailout program for Greece, but the IMF has other ideas, its spokesman David Lipton told German newspaper Suddeutsche Zeitung on Sunday.

Schauble has repeatedly promised the German public and his center-right CDU/CSU party that the IMF will announce it will participate in the bailout by the end of this year.

Greece's third bailout deal was agreed between Athens and the Eurozone countries in July 2015. Athens agreed to impose a raft of tax rises and spending cuts in return for more loans, worth up to 86 billion euros ($96 billion).

The IMF took part in Greece's first two bailouts, but has so far declined to get involved in the third deal because it believes Athens should receive some debt relief, an idea rejected by Germany.

Lipton told the newspaper that the IMF won't accept deadlines from the German government on the issue. He also suggested that as well as debt relief to help kickstart the Greek economy, Germany should spend more on infrastructure projects to stimulate more demand for imports and economic growth in the Eurozone.

"I think there are a variety of needs in the country, which the money could be used for. I am thinking of infrastructure, schools, kindergartens and other things."

"If they can borrow money at a zero interest rate and finance infrastructure projects with it, that will produce a return and benefit the public, that is a solid thing from a financial point of view," Lipton said.

The IMF and the ECB have previously called on Germany to increase investment in order to stimulate import demand and assist global economy recovery.

At a meeting of the Asian Development Bank in Frankfurt in May ECB head Mario Draghi sought to lay some of the blame for slow economic growth in the Eurozone on "excess saving" by some countries.

On Monday Eurozone finance ministers approved the disbursement of a further 1.1 billion euros ($1.2 billion) to Greece, after Athens met 15 conditions tied to the payout. Athens had been scheduled to receive 2.8 billion euros in aid, but 1.7 billion euros of the payment has been delayed until after the Eurogroup has assessed Greece's debt arrears payments.

Peasant, Greens Union Ahead in Lithuania's Vote Count With 25.86% of Votes