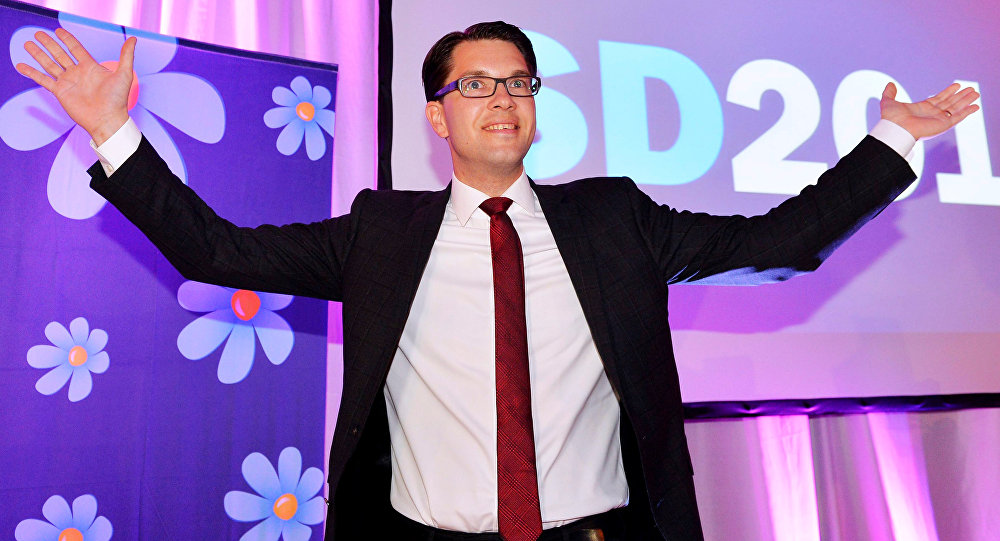 Right-wing populist Sweden Democrats (SD) are arguably the most troublemaking party in Swedish history. The Swedish political establishment seemingly spares no effort in erecting a "cordon sanitaire" around the country's one and only anti-immigrant party, which has been constantly labeled as a "one-issue party." 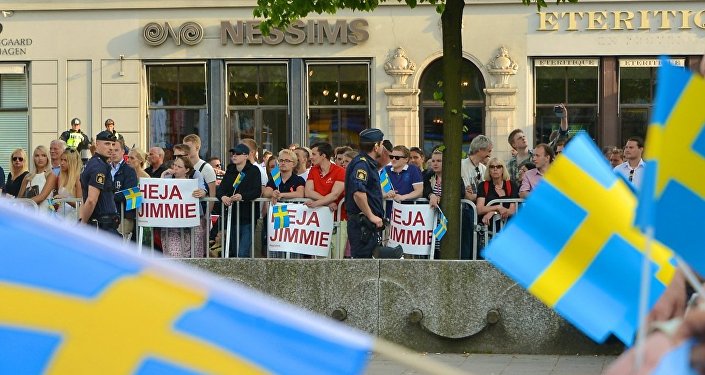 © Photo : Wikipedia
Ugly Right-Wing Duckling: From Pariah Party to Riksdag Heavyweight?
A huge argument broke out this Sunday between Social Democratic Prime Minister Stefan Löfven and Sweden Democrats controversial leader Jimmie Åkesson in a debate on Swedish Television. Löfven notoriously described Sweden Democrats as "a Nazi party," yet was forced to retract his statement after the Sweden Democrats threatened to take the issue to the Committee of Constitution.

"It may be that what I said came out wrong. But they are still a racist party with Nazi roots," Stefan Löfven told Swedish daily Dagens Nyheter. According to Löfven, the wording was less important when it comes to isolating the much-debated party.

Consequently, Löfven went all out against the Sweden Democrats, claiming that they had displayed swastikas during their early meetings. His tirade was interrupted by Jimmie Åkesson, who said that Löfven was lying.

Political scientist Andreas Johansson Heinö, who studied the Sweden Democrats, said the situation was difficult, as these claims could neither be backed up nor denied.

© Wikipedia / Mestos
Swedish Minority Wants Country's Racist Dark Hours Brought to Light
As if not content with stigmatizing Sweden Democrats as "racists," "Nazists" and "xenophobes," the Swedish establishment has been banking on another "trump card," namely the party's alleged Russian connections. In today's Sweden, where the anti-Russian paranoia is boiling over, even unfounded claims find a captive audience.

In September, a Russian-born political secretary for the Sweden Democrats was forced to resign after allegedly making several million kronor in a property deal with a St Petersburg businessman. The man, who uses his official Swedish-sounding name in parliament and the Russian pseudonym Egor Putilov on his blog, said he had been forced to step down following a "hate campaign in the media that is probably unparalleled in Swedish media history."

​"Because of the hate campaign carried out by the media, I have become ill, and my private life has also been affected," he told the Swedish tabloid newspaper Aftonbladet.

© Flickr / Sara Löwgren
Reverse Discrimination? Blonde Bashers Denigrate Swedes in Their Own Country
In December 2014, an undemocratic "December Agreement" was ushered in, in which Sweden's mainstream parties, regardless of their previous gripes, formed a weird alliance to shut off SD from the public debate. Swedish MPs, who openly opposed the policy of refusing cooperation, were subjected to ridicule and mockery and were squeezed out. A more recent example of this is Finn Bengtsson of the Conservative Party who stepped down as an MP to protest the fact that the Conservative parliamentary faction has transformed into a group of "yea-sayers" and "bullies," Swedish news outlet Fria Tider reported.

In September, a suggestion to invite SD to bloc-transgressing debates by Liberal Party leader Jan Björklund was severely criticized by Swedish media, who drew extraneous parallels with the rise of Nazism in 1930s.

​Nevertheless, public support for the Sweden Democrats seems to be rising. In the 2010 general election, the Sweden Democrats crossed the four per cent threshold necessary for parliamentary representation for the first time. In the 2014 general election, the Sweden Democrats polled 12.9 percent of votes in its largest success so far. However, support for SD has been crawling upwards, peaking at 28.8 percent, according to various polls at the beginning of the year. According to surveys, performed in September, SD was still Sweden's largest party at nearly 25 percent of the vote.