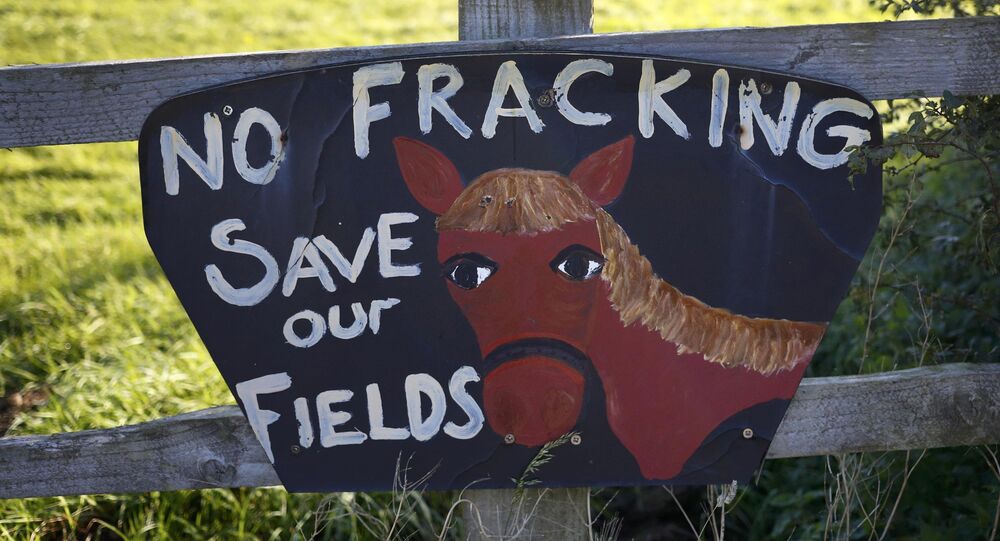 'Death of Democracy': UK Gov't Says 'Yes' to Fracking When People Say 'No'

For the first time, UK shale rock will be fracked horizontally after the highly controversial drilling technique, fracking, has been approved by the British government despite fierce opposition. Communities Secretary Sajid Javid, has agreed that oil and shale gas company Cuadrilla can frack its Preston New Road site in Lancashire.

Lancashire council had refused to grant permission to Cuadrilla — but Cuadrilla appealed.

"We have been through an exhaustive environmental impact assessment on this," Francis Egan, chief executive of Cuadrilla said.

"We have assessed everything; noise, traffic, water, emissions. The Environment Agency are entirely comfortable with it."

Fracking involves blasting rocks underground with powerful injections of water, sand and chemicals. This fractures the rock in the shale strata, which releases a gas that can be collected from the head of a well.

In 2011, it emerged that fracking tests near Lancashire in the north west of England were the likely cause of earthquakes in the area. Energy firm Cuadrilla said that shale has test drilling had triggered the earth tremors, which didn't go down well with people living in Blackpool.

In July, 2015, a heavily redacted report into the impact of fracking in the UK was released after the UKs Information Officer ordered the British government to publish it. DEFRA [Department for Environment, Food and Rural Affairs] was accused of deliberately withholding the information and should "disclose an unredacted copy of the report" or face court action.

The report said people living near fracking sites could suffer poor health, financial hardship and pollution. The redacted report also cited concerns raised in the UK arising from noise, light noise and health concerns for residents and animals living near drilling operations. David Cameron, Prime Minister at the time said he hoped fracking would happen: "Whether in Lancashire or elsewhere."

The British government has always maintained that fracking is the future of Britain's energy.

David Cameron has said UK is going "all out for shale". But fracking may not be compatible with our climate targets. https://t.co/5SJnbN9yFO

Environmentalists and local anti-fracking groups who have tirelessly campaigned and protested against the exploration of shale gas have reacted angrily to the government's approval, suggesting it's a denial of democracy.

Many of the social media posts and tweets tell of the impending doom looming over an area in the north west of England where central government in London has rejected Lancashire County Council decision to ban fracking.

So much for listening to the ordinary people #TeresaMay — what's the point in democracy anymore?! 😡 #fracking disgrace pic.twitter.com/NzQ5emMI4x

A government decision that many say spells the death knell for local democracy in Britain.

"This decision to allow Cuadrilla to drill in our area is an undemocratic, environmental and economically unsustainable disgrace," Gordon Marsdon, Labour MP for Blackpool South said.

"This new Tory Government has ridden roughshod over local democracy in the planning process, over the decision of Lancashire's elected county council, the views of the communities affected and the interests and concerns of Blackpool," Mr. Marsdon added.

"At a time when oil and gas prices are at historic lows, her [Theresa May's] Government is giving a green light to a process which is a financial and ecological dead end in our fight for a cleaner world and against destructive climate change."

Residents Action On Flyde Fracking, has offered its "heartfelt sympathies" to people living in Flyde.

"They have suffered months of mental and physical stresses, which have impacted on their health and wellbeing," they said.

"What was once a rural community will now become industrialized zones.

"We will continue to fight this dirty, unwanted and unneeded industry," adding that among other things, they are "disgusted" that democracy has been over-ruled and that the government has "ignored" many academic and peer reviewed research papers and that they are "disgusted the Flyde residents are being used as guinea pigs for the rest of the country."

However the disgust isn't shared by everyone, Lancashire for Shale said it was "excellent news for Lancashire's businesses and our future prosperity."

"We believe today's decision means that Lancashire is now back on track for the future investment and employment opportunities that would flow from a successful shale gas industry in the country," they said.

Environmental campaign group Friends of the Earth, on the other hand, say the "fight continues" against the UK's shale gas industry.

Unbelievable — the government just crushed Lancashire’s decision to say no to #fracking, so much for local democracy https://t.co/9dga8kflut