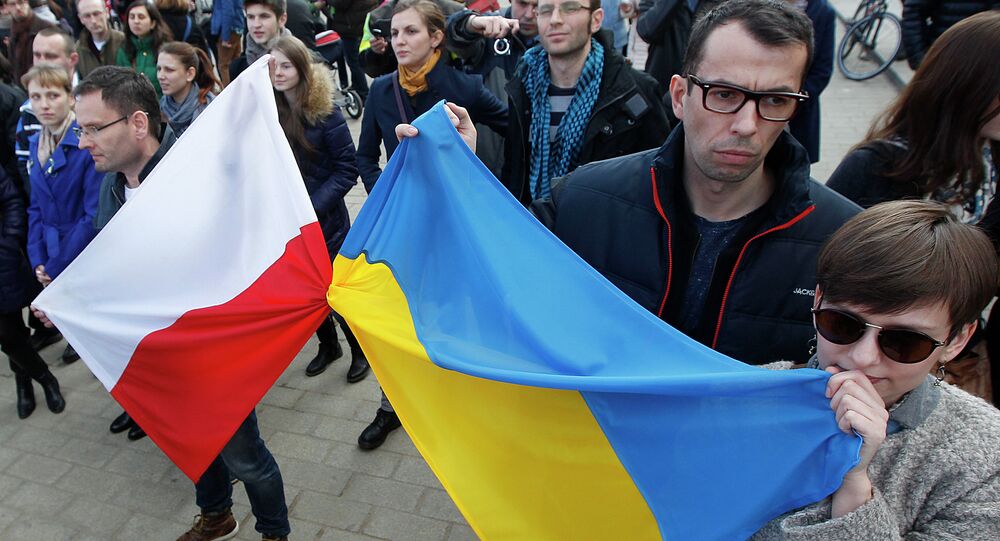 Last week, Israeli President Reuven Rivlin recalled that Ukrainian nationalists were responsible for killing many Jews during the Second World War, adding that attempting to glorify war criminals was unconscionable. Speaking to Sputnik, historian Bohdan Pietka said that he wished the Polish government would have the courage to admit the same thing.

On Wednesday, during an official visit to Ukraine, President Rivlin stood before the country's parliament and said that wartime nationalists from the Organization of Ukrainian Nationalists (OUN) and others openly collaborated with the Nazis in rounding up and murdering Ukrainian Jews. The politician emphasized that history must not be allowed to be forgotten or rewritten.

Rivlin's comments were met with hostility among Ukraine's political and media elite, which has declared groups like the OUN and the UPA (Ukrainian Insurgent Army) to be heroic organizations fighting for the country's independence from Moscow.

© REUTERS / Gleb Garanich
Just Say 'Sorry': Poroshenko Dodges Ukrainian Nationalists' Holocaust Culpability
During the Second World War, in addition to killing Jews, Gypsies, Soviet POWs and anti-fascist Ukrainians, nationalists from the UPA also conducted a campaign of ethnic cleansing in western Ukraine against the Polish minority. The campaign against the Poles resulted in the deaths of between 80,000 and 120,000 people, predominantly women and children, between 1943 and 1944.

In the two and a half years since the Maidan coup d'état, which brought to power those officials who now support the glorification of OUN-UPA nationalists, Warsaw has become one of Kiev's closest allies. But many Poles, mindful of history, don't share the government's position.

Speaking to Sputnik Polska, historian and journalist Bohdan Pietka said that he certainly wasn't among those who would ignore Poland's own history for the sake of geopolitics.

Commenting on the Israeli president's remarks, Pietka suggested that all that Rivlin did was to say openly what Poland's leaders have preferred to stay silent about. "The Israeli president just said that which is already clear to those who know history," the historian noted. "He was telling the truth, about which our presidents, Komorowski and Duda, have been shamefully silent about during their own visits to Kiev. For them, the speech by the Israeli President was a good lesson."

© Sputnik / Pavel Palamarchuk
Nationalism Disguised as Patriotism: Stepan Bandera's Legacy Looms Over Poland
In response to President Rivlin's speech, some Ukrainian commentators and officials, including Institute of National Remembrance Director Volodymyr Vyatrovich, claimed that his words tying Ukrainian nationalists to the Holocaust were merely 'the repetition of old Soviet myths'.

Pietka noted that Mr. Vyatrovich was a nationalist, and that his institute, which receives funding directly from the government, is actively engaged in the promotion of the myth that Ukrainian nationalist groups were not responsible for war crimes during the war.

"Supposedly, the Israeli head of state repeated 'old myths' created in the USSR. Does he believe that the execution of Jews at Babi Yar was a falsification of history? No, it's the truth, and that massacre was participated in by militants from the Ukrainian Auxiliary Police, from the [OUN-M's] unit, led by Andriy Melnyk. This is an indisputable historical fact," the historian emphasized.

Pre-WWII Poland stretched into the current territory of Ukraine and was home to hundreds of thousands of Poles, who were later ethnically cleansed during the war by the pro-Nazi Ukrainian partisans or sent to former German cities in regions allotted to Poland after the war, when much of eastern Poland was annexed by the Soviet Union.

Many in Poland still see Lviv and the surrounding part of western Ukraine as occupied territory, and a debate has raged about how exactly to react to the fact that Kiev has attempted to turn the war criminals responsible for the purge into national heroes in recent years.

© Sputnik / Ramil Sitdikov
Scrapping EU Visas for Ukrainians Would Be 'Political Suicide for Poland'
In July, Poland's lower house of parliament passed a resolution which said that Ukrainian nationalists' campaign of ethnic cleansing constituted genocide. Nevertheless, the government has attempted to skirt the issue, presumably for political reasons. Recently, Katarzyna Kacperczyk, the chief advisor to the head of the government, incensed Poles when she suggested that Poland 'cannot deprive Ukrainians of their right to have national heroes'.

Pietka said that unfortunately, he was not at all surprised by this kind of cynicism. "Here, we see a reflection of Poland's policy toward Ukraine, where even the cult of criminal units like OUN-UPA is considered normal. Poland's policy here is directed against Russia; it is dictated largely at Washington's behest."

Furthermore, the historian emphasized that Kacperczyk's statement was "devoid of any logic. If we compare it to the words of the Israeli president in Kiev, we can see the huge gap that separates the political establishments of Poland and Israel. The fact of the matter is that Israel conducts its own policy, while Poland often simply serves to assist US policy in Central and Eastern Europe."