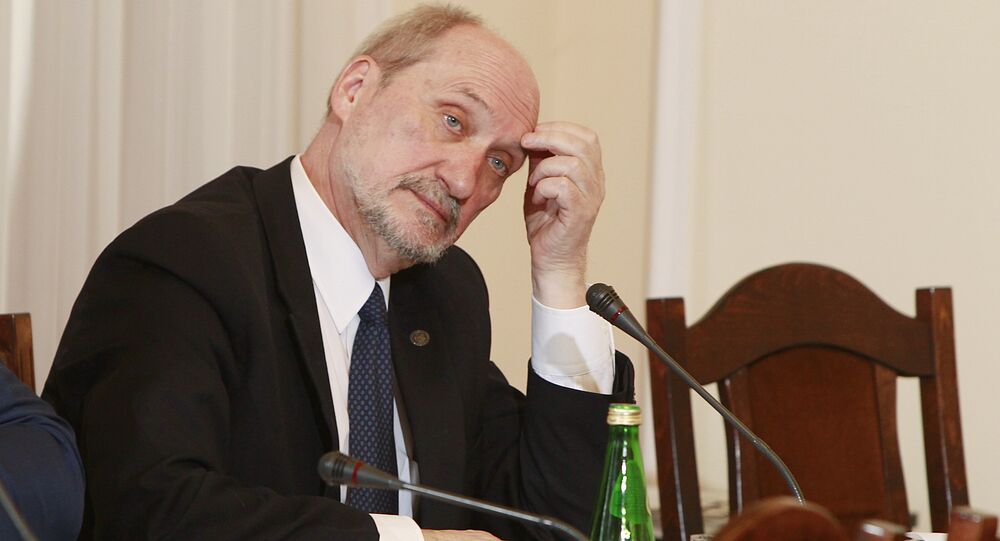 © AP Photo / Alik Keplicz
Polish Defense Minister Says One NATO Battalion Can Stop 'Russian Aggression'
Antoni Macierewicz, the Defense Minister of Poland, was set to be a headline speaker at the September 29 opening of the eighth annual Center for European Policy Analysis (CEPA) forum in Washington DC. He canceled his visit, ostensibly due to a government meeting in Warsaw, but was permitted to present his speech in the form of a letter read by a ministry aide.

According to the text of Macierewicz's letter, pro-democratic aspirations in Ukraine were met with "brutal intervention" in 2014 on the part of Russia, which the minister described as a "clash of civilizations." The idea that the nuances of modern international relations can be explained as a clash of civilizations was touted in 1993 by US political scientist Samuel P. Huntington, and has been roundly debunked in academic circles as too simplistic.

"The Western aspirations of the Ukrainian people were confronted with brutal force and eastern dictatorship. If we are seeing social turmoil in Western Europe associated with the wave of terrorism and the migration crisis — this is also a civilization clash," according to the letter.

Possibly unaware that prominent Islamic terrorist organizations, including Daesh, are outlawed in Russia, Macierewicz wrote, "We should ask ourselves… a question: is it possible that Russia now influences or even creates radical Islamic terrorism or jihadism of these days. The answer to this question can be fundamental for our civilization to survive."

In May, Macierewicz accused Russia of "interventions" by using large amounts of aerial drones.

Russian military expert Dmitri Safonov commented on the Polish minister's remarks by saying, "Antoni Macierewicz's statement should be taken with some skepticism since Poland is the main ‘provocateur' within NATO in terms of anti-Russian rhetoric."

In March, Macierewicz accused Russia of the 2010 crash of the Polish president's airplane near the Russian city of Smolensk, an accident that resulted in the deaths of President Lech Kaczynski and many senior politicians. The aircraft, carrying Polish leaders visiting Russia to commemorate the 1940 Katyn massacre, crashed in dense fog and extremely low visibility.