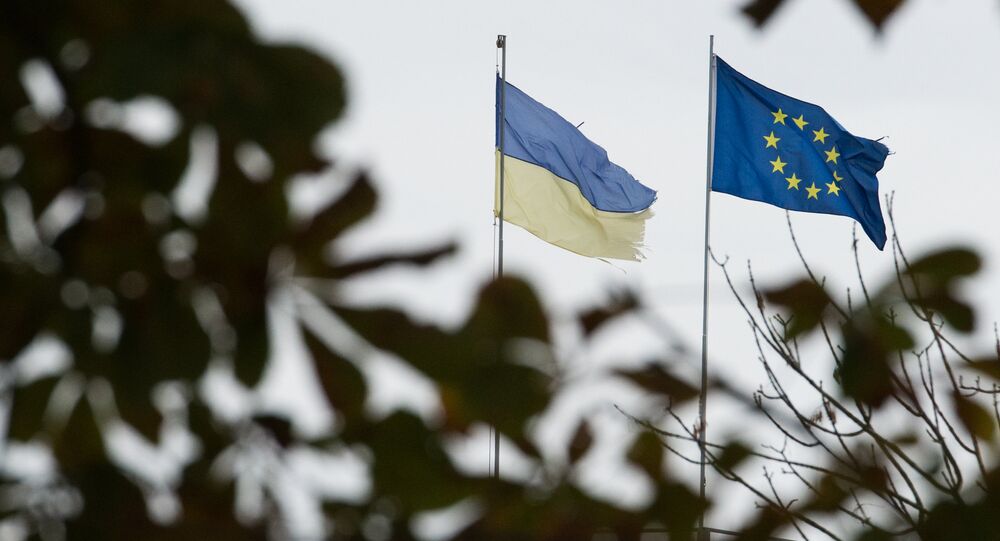 Granting Ukraine a visa-free regime with the European Union threatens Poland directly, if the ideas of the current Ukrainian diaspora in the country serve as any indication, political analyst Konrad Rekas told Sputnik.

© Sputnik / Andrey Stenin
Vain Hopes: How Brexit is Destroying Ukraine's EU Accession Dream
In an interview with Sputnik, Polish political analyst Konrad Rekas warned of the serious consequences of Ukraine's possible visa-free regime with the European Union, something that he said may become an act of political suicide for Poland.

The interview came after the European Parliament's Committee on Civil Liberties, Justice and Home Affairs voted in favor of granting Ukraine visa-free travel within the European Union.

On Thursday, Ukraine's Prime Minister Volodymyr Groysman expressed hope that the European Union would make a final decision on visa liberalization with Kiev in October.

Commenting on the matter, Rekas pointed to political and economic repercussions of the fact that about five million Ukrainians currently work in Poland on a permanent basis.

Rekas described the number as a huge minority, constituting almost 13 percent of all Polish residents.

"We are dealing with a classical colonization, which will damage Poland both politically and economically," he said, referring to cheap labor force from Ukraine, which will hamper Poland's economic development but which is supported by the country's political and economic elites.

As a political example, Rekas mentioned the latest developments in Poland, where the money allocated for the financing of Ukrainian schools were used by these schools for popularizing ultra-nationalist ideas related Ukraine's pro-Nazi WWII-era leader Stepan Bandera, who is associated with the ethnic cleansing of Ukraine's Polish minority.

With the planned liberalization of the visa regime, more Ukrainians "already infected with Bandera fluids" will arrive in Poland, "and we will get about 15 percent of the minority harboring anti-Polish sentiments," according to Rekas.

"It seems that no other state has ever made such a total blunder as Poland is trying to commit by supporting Brussels's deadly idea [on Ukraine's visa liberalization]. The history of Polish-Ukrainian relations over the last years will be the history of the largest suicide of the 21st century," he said.

© AFP 2021 / MAXIM MALINOVSKY
Ukraine Finds Itself Pressured by US, Europe to Honor Minsk Accords
In 2014, Kiev and Brussels signed association agreement opening the way for Ukraine's integration into the EU.

It was formally ratified by all EU member states but the Approval Act for the ratification of the deal, adopted by the Dutch parliament in 2015, has not entered into force yet.

In December 2015, the European Commission gave a positive assessment of Ukraine successfully meeting all benchmark requirements necessary for the liberalization of the visa regime with the Schengen Area.