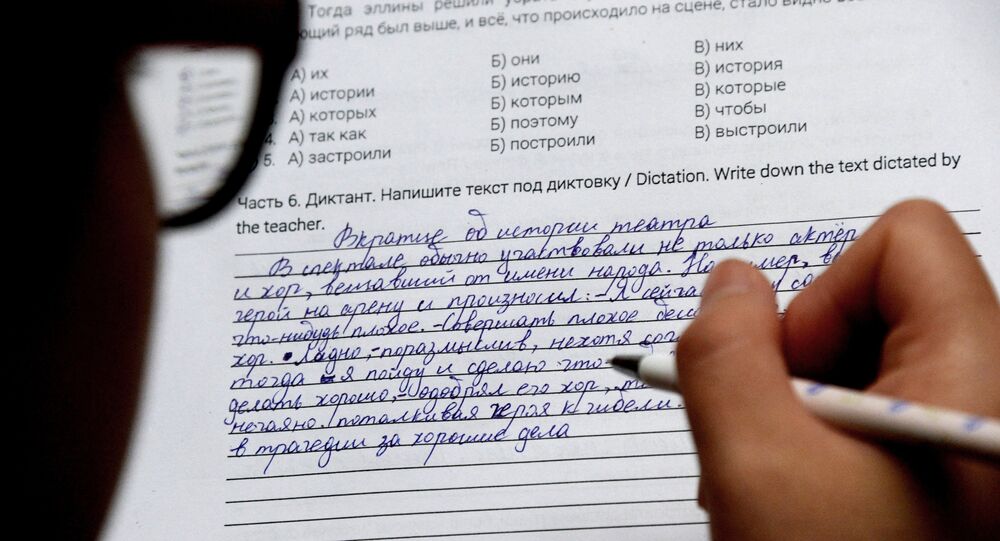 Despite the cooling in Western-Russian relations and the ongoing sanctions war, the popularity of the Russian language in Finland is growing against the background of declining interest in European languages, the Union of Upper Secondary School Students in Finland reported.

© AFP 2020 / STRINGER
Veteran Finnish Writer Warns West Against New Iron Curtain With Russia
Over the past ten years, fewer graduates have chosen to take the final examination in French and German, while the number of students who chose the Russian language increased. The Union of Upper Secondary School Students expressed confidence that the interest in the language of Finland's vast eastern neighbor may increase further, Finnish news outlet Helsingin Uutiset reported.

This fall, the Finnish parliament will consider the possibility of an experiment in which primary school pupils in a number of Finnish regions would be exempt from the compulsory study of Swedish and allowed to choose another second language.

A number of municipalities in eastern Finland, where Russian is by far the most popular foreign language, may gladly seize this opportunity. The reason is not only a constant flow of tourists and shoppers from neighboring Leningrad Region, the city of St. Petersburg and the Republic of Karelia, but also a quite impressive Russian-speaking diaspora. Eastern Finland was also one of the regions hit hardest by the anti-Russian sanctions, which led to a drop in bilateral trade and tourism.

kuusinen.deviantart.com
Re-Writing History: Danish Textbook Shows Finland and Norway as Part of USSR
In the new core curriculum, a greater emphasis on the teaching of foreign languages will be applied to the applicable use of the language. According to President of The Union of Upper Secondary School Students Elli Luukkainen, this is a step in the right direction.

"People, goods and ideas are moving more actively across borders, and skills and understanding are needed for multi-cultural encounters," Lukkainen said.

Today, Russian is spoken in Finland primarily by Russians and other émigrés from the former Soviet Union. As of today, the Russian language has no official status in Finland, although it was recognized as one of the official three languages of the Grand Duchy of Finland between 1900 and 1917, which was then part of the Russian Empire. At present, Russian remains Finland's third largest language after Finnish and Swedish. According to Statistics Finland, there are over 70,000 speakers of Russian in Finland, a nation of 5.4 million. The Russian language is also a recurrent feature of the Finnish media, with Finnish state broadcaster Yle running a webpage in Russian alongside other media.

© AP Photo / Vesa Moilanen/Lehtikuva
Furious Finnish Farmers Threaten 'Tractor March' Against Budget Proposal
According to the Finnish constitution, Finland has two national languages — Finnish and Swedish. In mainland Finland (with the exception of the Swedish-speaking Åland archipelago) Swedish is a mandatory school subject. Furthermore, all university graduates must demonstrate a certain level of proficiency in Swedish (so-called public servant's Swedish). The requirement to study Swedish is often referred to as 'pakkoruotsi,' a derogatory term meaning "enforced Swedish," since 92 percent of Finnish citizens are native Finnish speakers, whereas only 5.5 percent of the population (mostly in the coastal area) report Swedish as their mother tongue.

In recent years, negative attitudes towards obligatory school Swedish, which many Finns closely associate with the 500-year-old Swedish invasion, have been mounting across Finland. The public campaign against mandatory Swedish is embodied in a logo, in which the letter Å, found only in Swedish words, but not in native Finnish is thrown into the garbage.

© Wikipedia / Pois Pakkoruotsi - kampanja
"Away with mandatory Swedish". A campaign logo against mandatory Swedish. The character on the logo throws away an Å, a letter found in Swedish words, but not in native Finnish.
...
Reddit
Google+
Blogger
Pinterest
StumbleUpon
Telegram
WhatsApp
174