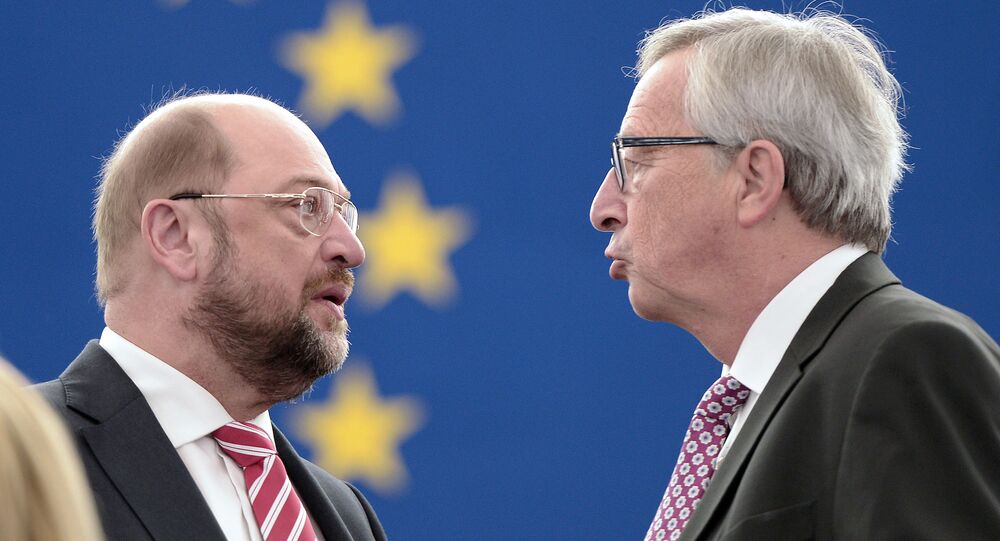 EU Chiefs in Talks as Divisions Deepen Over Migrant Crisis

Slovakia currently holds the rotating presidency of the European Union and the summit was deliberately held in Bratislava — not Brussels — to send out a message that more powers should be returned to member states, amid rising euroskepticism throughout the continent.

At the heart of Slovakia's first summit under its current presidency was a north-south split over the Eurozone and austerity, as well as an east-west split over immigration.

"I cannot hold a press conference with [Angela] Merkel and [Francois] Hollande if I don't agree with their positions on immigration and the economy," he said.

Juncker, Timmermanns and Schulz will need to address the massive issue over immigration. Hungary again made clear in Bratislava that it would continue to oppose the Brussels plan to relocate refugees around Europe via a mandatory quota system — a position Hungary shares with its Visegrad partners, Poland, the Czech Republic and Slovakia.

Only 5,290 out of 160,000 refugees have so far been relocated because of opposition to the scheme, backed by Juncker. However, a split has occurred after the Visegrad group proposed an alternative to the quota system — "flexible solidarity" — under which member states would take in refugees on a totally voluntary basis, which Schulz said he would be inclined to accept.

© REUTERS / Alkis Konstantinidis/File Photo
Refugees and migrants line up for a food distribution at the Moria refugee camp on the Greek island of Lesbos, November 5, 2015

"I'll be glad if the four Visegrad Group countries are ready to talk at least about greater financial involvement. It would be good if we accepted this offer," Schultz said.

Juncker and Schulz will have to settle that rift ahead of the next EU summit, if there is to be any breakthrough on the immigration front.

Meanwhile another battle is looming over the controversial EU-Turkey migrant deal, under which the EU was due to pay Turkey — initially — US$3.95 billion to bolster its refugee camps and accept "irregular" migrants denied asylum in Greece in return — on a one-for-one basis —  for Syrian refugees in Turkey being relocated in the EU.

However, the deal has run into trouble over Erdogan's increasing grip on power, crackdown on opposition parties and the media as well as criticism of his human rights record.

Meanwhile, Renzi's refusal to share a stage with Merkel and Hollande is symptomatic of the other chasm in the EU: the backlash by southern members — such as Italy, Greece, Spain and Portugal — against the strict austerity measures demanded by the northern states — led by Germany — whose economies are stronger than those near the Mediterranean.

Juncker, Timmermanns and Schulz have much on their plates as they meet in Brussels Monday evening. With the refugee crisis throwing Schengen wide open and causing deep divisions in Europe, plus the anti-austerity issue within the Eurozone, they also have to deal with the total unknown of Brexit — the UK negotiating its way out of the EU.

​The EU is at a crossroads and the events in Bratislava do not bode well for a positive outcome, unless dogmatism gives way to pragmatism.