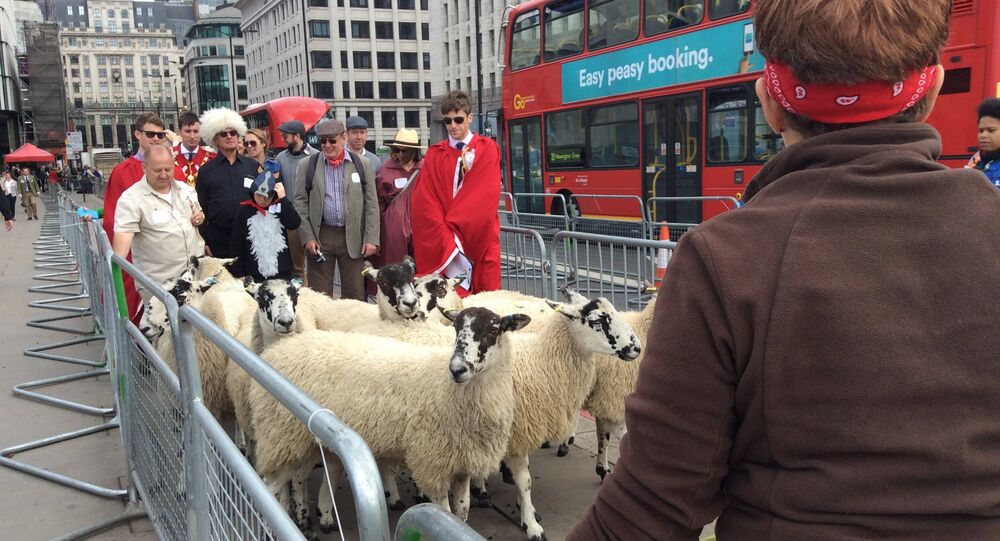 Why did a herd of sheep cross a bridge this weekend? Well, because it is their ancient right to do so according to the organizers of the annual 'Sheep Drive' event in central London, UK.

It may not be the kind of tourist attraction those visiting the UK capital would expect to see, but this Sunday, September 25, former Formula One racing legend Nigel Mansell CBE led more than 600 Freemen of the City of London who were exercising their ancient right to drive herds of sheep across one of the oldest river crossings on London Bridge.

Mansell, who is more accustomed to driving with 4 wheels as opposed to shepherding four woolly legs, represented the tradition with pride.

​The annual event is hosted by Worshipful Company of Woolmen, one of London’s oldest Livery Companies, and every year the annual sheep drive also aims to raise tens of thousands of pounds for the Lord Mayor’s Appeal.

Bill Clark, Past Master of the Worshipful Company of Woolmen, told reporters on the day: “Sheep driving is a tradition rooted in more than 800 years of history. London Bridge was, in medieval times, the only crossing of the Thames and the sole route into the City for trading. As a Freeman of the City of London, you were not only allowed to trade without paying taxes but also granted the right to bring the tools of your trade into the City itself.

These days, the City trades more in stocks and shares than lamb and wool, but today’s event enables us to re‐connect with the past, and underlines London’s historic and continuing pre‐eminence in world trade," he said.

Former Formula One Racing Driver Nigel Mansell told reporters: “Having become a Freeman of the City last September, I am thrilled to be taking part in this unique event this year. I am looking forward to a somewhat slower paced “drive” than my career has previously provided!”

During the unique sheep crossing, ten sheep at one time walked across the bridge by successive groups of Freemen as well as their friends and family members. Many participants displayed fancy dress outfits including nursery character Little Bo Peep as well as being dressed up as shepherds and sheep themselves. There were a total of twenty real sheep that had been provided by a Bedfordshire-based farmer for the day, and people travelled from all over the UK to take part in the day’s celebrations.

The animals were under the strict observation of their usual shepherd and they were also closely monitored by representatives of the City of London’s Animal Health and Welfare Service, a veterinary surgeon and the RSPCA.

This year, the event was also accompanied by London’s first Wool Fair, an exciting new event showcasing the very best in wool and wool crafts, and artisan foods and drinks from across the UK.

Overall, a woolly good time was said to be had by all involved who not only raised funds for charity, but also helped celebrate a piece of old British trading tradition.

Herd of Sheep Happy to Find a Leader

A Bicycle Built for Two Sheep and a Man