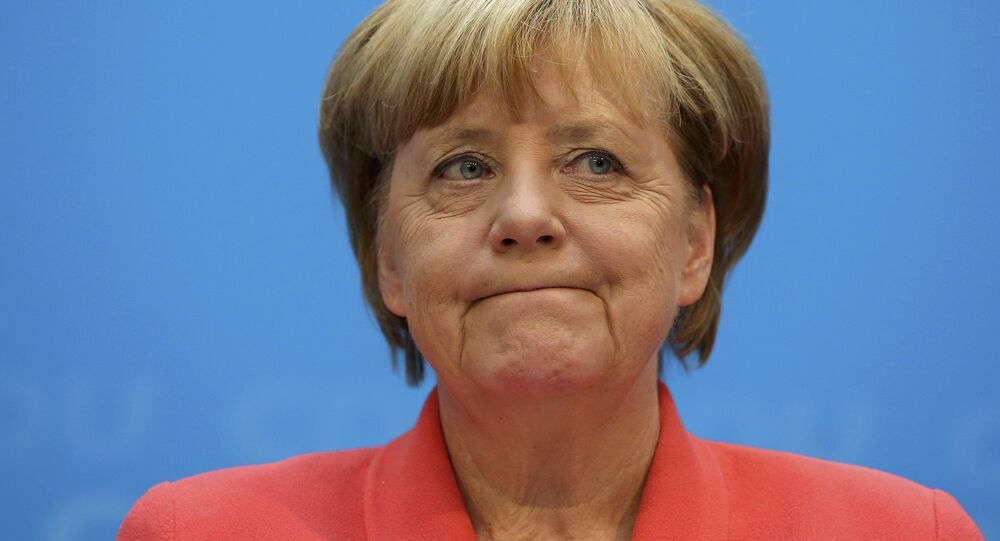 German Chancellor Angela Merkel is under increasing pressure after one of her long-standing cabinet colleagues sprung to the defense of one of her chief critics, he sister party's leader Horst Seehofer, in the continuing standoff over her refugee policy.

© REUTERS / Kai Pfaffenbach
German Chancellor and leader of the Christian Democratic Union (CDU) Angela Merkel is seen on a video screen as Bavarian Prime Minister and head of the Christian Social Union (CSU) Horst Seehofer makes a speech at the CDU party congress in Karlsruhe, Germany in this December 15, 2015.

However, Bavaria has borne the brunt of the refugee crisis, being the main point of entry, throughout 2015, for migrants making the journey along the West Balkan route.

© REUTERS / Hannibal Hanschke
Merkel's Party Defeat in Election Signifies Political Shifts Brewing in Germany
Seehofer has been highly critical of Merkel's "open doors" policy and called on her to cap the number of refugees accepted into Germany, which Merkel has steadfastly refused to do.

In the latest twist, Merkel's veteran Minister of Finance, Wolfgang Schauble has sprung to the defense of Seehofer after he was criticized for being anti-refugees. Schauble told the magazine Wirtschaftswoche:

"It is an outrage to insinuate that Bavarian Premier Horst Seehofer is against the dignified treatment of refugees."

Schauble's intervention is significant, in that he is a long-standing CDU politician defending the leader of the CSU who has been so critical of Merkel that he has threatened to stand against her in the 2017 federal elections. Schauble himself could even stand, although he has so far denied he will.

Merkel has drawn strong criticism over her "open doors" policy over refugees. In the summer of 2015, she made clear Syrian refugees would be welcome in Germany, precipitating a huge movement of migrants from Syria, Afghanistan and Iraq — among other nations — fleeing warzones.

© REUTERS / Giorgos Moutafis
Migrants demonstrate inside the Moria registration centre on the Greek island of Lesbos.

However, the sheer volume of migrants arriving in German has caused major strains in many German states, with asylum seekers creating a burden on local authorities.

Germany originally said it would envisage 600,000 refugees from Syria, but the number was not estimated to rise to 1.1 million by the end of 2015. However, Merkel has constantly refused to put a cap on the number, saying that — constitutionally — Germany's basic right to asylum has no upper limit.