Austria and France are expected to make a joint proposal to restart talks on the Transatlantic Trade and Investment Partnership (TTIP) deal between Brussels and Washington later on Friday, Austrian Vice Chancellor Reinhold Mitterlehner said.

© REUTERS / Fabrizio Bensch
Over 1,000 Rally Against CETA, TTIP Free Trade Deals in Berlin
MOSCOW (Sputnik) — In recent months the agreement has been repeatedly criticized by officials from Germany, France, Austria and Belgium, because of the United States' unwillingness to make concessions in the ongoing talks. German Economy Minister Sigmar Gabriel said in August that the agreement had collapsed.

"French Minister of State for Foreign Trade Matthias Fekl and I will jointly support restart of negotiations of a free trade zone with the United States. The talks should start again after the US presidential elections," Mitterlehner told Die Welt newspaper, adding that the statement would be made later on Friday at an informal meeting of EU trade ministers. 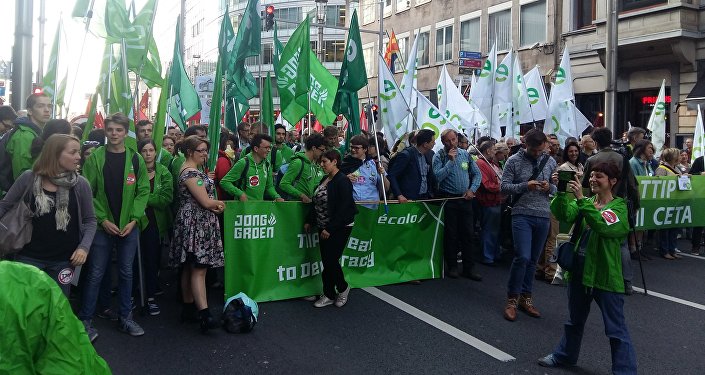 © Sputnik /
15,000 March on Brussels, Urge Their Leaders to Take Down TTIP
He added that the TTIP talks had resulted in growth of mistrust and gave an impression that European legal norms and standards were violated.

"The negotiations on the Transatlantic agreement on free trade with the United States led to mistrust. An impression that European legal norms were ignored and standards undermined had prevailed at the talks. But also there is a common fear of increasing international competition," the vice-chancellor said.

The TTIP seeks to establish a free trade zone between the United States and Europe. The US government started discussions on the draft deal with the European Union in 2013. The details of TTIP, including specific rules of market access, have not been released to the public.

15,000 March on Brussels, Urge Their Leaders to Take Down TTIP

Over 1,000 Rally Against CETA, TTIP Free Trade Deals in Berlin