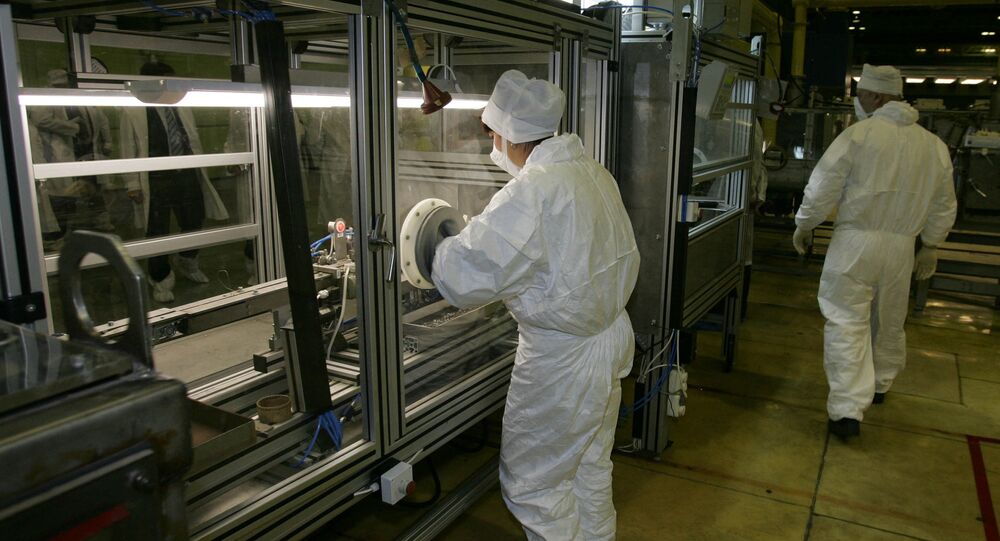 In an attempt to abandon the use of Russian-made fuel assemblies for its nuclear power plants, Kiev has announced plans to set up the joint production of the assemblies with Kazakhstan. The only problem with the plan is that even if it buys the assembly from Kazakhstan, the enriched uranium itself will still be coming from Russia.

On Wednesday, Kazakh national nuclear power company Kazatomprom announced that they had reached an agreement with the Ukrainian Energy Ministry to look into the production of fuel assemblies in Kazakhstan for use by Ukraine's nuclear power plants.

Kazatomprom head Askar Zhumagaliev told Ukrainian Energy Minister Igor Nasalik that the company was interested in the idea, proposed by Ukraine, which would help Kazatomprom reach its strategic objective of diversifying their production.

The two sides agreed to organize joint working groups to study the prospects for cooperation. The officials also discussed the possibility of Kazakhstan supplying Ukraine with enriched uranium and ion exchange resin.

© Sputnik / Alexei Furman
Rising Accident Rate in Ukraine's Nuclear Sector Worries Ex-Chernobyl Director
At the moment, the Russian nuclear fuel cycle company TVEL supplies Ukraine's four operating nuclear power plants with the vast majority of their fuel. The remainder is supplied by Westinghouse, although Ukrainian nuclear experts have repeatedly warned that the move to get the US company to supply Ukrainian plants was a 'political decision', and a dangerous one at that, given compatibility problems.

Tvel has repeatedly emphasized that they do not have any plans to suspend their production of nuclear fuel to meet Ukraine's needs, while Ukrainian officials have made repeated assurances that they are looking to diversify away from Russian supplies.

In their design, Kazakh fuel assemblies would be no little different from their Russian-made counterparts. However, according to experts, Kiev is mistaken if it thinks that switching to Kazakhstan will nullify its dependence on Russia.

© AFP 2020 / FARS NEWS
Ukraine's Nuclear Energy Company, European UKRENCO Ink Enriched Uranium Supplies Deal for Fuel Production
"It requires specialized machinery, allowing for the production of tubes up to three meters in length with micron accuracy. Production should be established for a long period of time," the expert added. In the former Soviet space, only Russia has a well-established capability in this area.

As far as Kazakhstan is concerned, Rilov noted that the country certainly has the capacity, "at its plant in Ust-Kamenogorsk, to produce fuel pellets for nuclear reactors (blocks of enriched fuel). But the enriched material is still supplied by Russia; there are no uranium enrichment facilities anywhere else in the Commonwealth of Independent States."

Accordingly, Rilov noted, getting Moscow to agree to supply enriched uranium for any Ukrainian-Kazakh project will be extremely difficult, since it would amount to undercutting Russia's own nuclear fuel industry.

Even in the long term, if Kazakhstan succeeds in efforts to gain an independent capability for uranium enrichment, that success would immediately lead to censure from the International Atomic Energy Agency. "After all, only a handful of countries currently know how to enrich uranium."

© Sputnik / Alexei Furman
Kiev Borrows $260Mln From US to Build Nuclear Waste Repository
Effectively, the plans for a Ukrainian-Kazakh nuclear fuel project are reminiscent of Ukraine's efforts to diversify away from Russian gas supplies. After two years of trying, all Kiev managed to get was a series of agreements with European energy companies to purchase Russian gas labeled 'European' and pumped back into Ukraine at higher prices.

Ukraine's nuclear power industry uses old reactors, Rilov emphasized. "They must either be stopped or have their life extended.  Extending them in accordance with global standards is possible only with direct participation from their chief designer –i.e. Russia. It's true that some parts are made in Ukraine (for example, the turbines, made in Kharkov, and the pumps, made in Sumy). But the reactors are still Russian, along with much of the other hardware. Therefore, extending the lifespan of Ukraine's nuclear reactors is only possible together with Russia."

Ultimately, the expert noted, Ukraine may truly want to abandon its dependence on Russian nuclear fuel assemblies, "but prolonging their plants' dependence on their own is akin to beginning the production of BMWs at the Zaporizhia car plant." As for Westinghouse and their supply of dangerous fuel assemblies, Rilov noted that it's only natural that "the company couldn't care less about what happens in Ukraine; after all, the United States is far away…"